I've been making the case for what our Neighbourhood's called for five years now. My logic is simple. I think it matters that we have a shared identity that we're proud of.

It's not been plain sailing. The Council have been trying to change our 130 year old name to Green Lanes for some time now. I was told by a Council Cabinet member, Nilgun Canver, that Harringay doesn't exist. Then there was the whole bridge banner thing.

So far this year's been a good year. The south side of the new bridge banner is going to say Harringay. Bish-bosh. Simple. (Update: Errr...not so quick Hugh. Cabinet member, Councillor Nilgun Canver got in there at the last minute and took it on herself to change this!)

Then a few weeks back I came across a resident in another area who was fed up with his neighbourhood being rechristened by estate agents. So, to find out what the man in the street thought, he walked 4.5km down his high street, stopping every 200M to ask 10 people at each stop "Excuse me, what area is this?". He published the results on a website called thisisntfuckingdalston.co.uk.

Great idea for Harringay, I thought. Let's find out what the 'man in the street' really thinks. So I copied the original idea and walked down Green Lanes from Manor House to Turnpike Lanes, stopping every 200 metres to ask 10 randomly selected strangers, "Excuse me, what area is this please". I wasn't expecting to have my day made, but I was very pleasantly very surprised.

So, Council, are you listening? This isn't me. This isn't a self-selecting group of digitally connected HoL users. This is 120 randomly selected 'men in the street' and their verdict is that this isn't Green Lanes.

I was scrupulously fair, not discriminating about who I asked. The only results I didn't record were those when the language barrier made it impossible to complete the Q&A.

In the chart below, the scale on the left shows the number of people who responded to each choice. 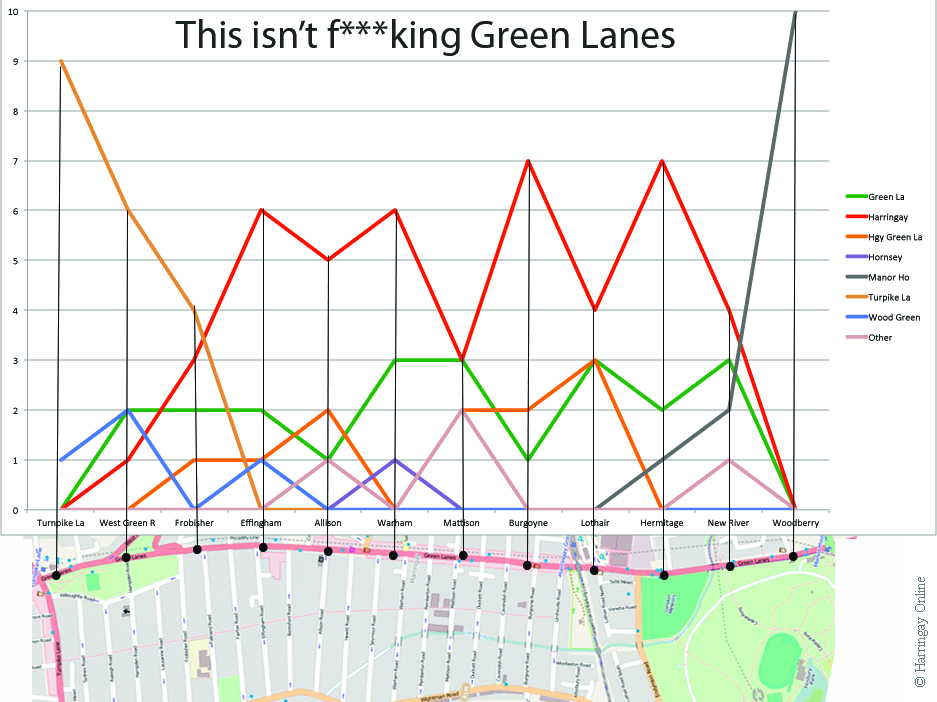 So right at the heart of the area concerned (Mattison Rd - near enough) we have a tie betw 'Harringay' & 'Green Lanes'. Oops!!

Excellent work Hugh. Old Haering himself would be spinning in his grave. Green Lanes indeed.

Of the options on the right, only three are what I would think of as 'places' or settlements that you could possibly live 'in' rather than 'near' - Harringay, Wood Green and Hornsey. Manor House is a landmark/tube station, Green Lanes is a road, and Turnpike Lane is both.

To my mind, Harringay is (roughly) the Ladder, the east side of Green Lanes from West Green Road down to St Ann's Road, the Gardens east of Green Lanes and south of St. Ann's Road (and the hospital?), the Arena shopping centre, plus stuff on Green Lanes up to Manor House and maybe a wedge along the north side of St. Ann's road towards Chestnuts. Turnpike Lane is the southern extremity of Wood Green isn't it? And doesn't Hornsey only start the other side of the railway? Too much confusion.

I have more planned, William. As you may know, I contend that Harringay is both east and west of Green Lanes. It's only the made up post 1965 ward of St Ann's that wrong foots you. Prior to that there was even a Harringay ward covering part of what is now St Ann's ward. But ward names are administrative districts that are only really important to people who work in or with councils. So let's move quickly on. I'll have the residential road results once I get a chance to do them.

Oh I can get on board with that. So is Black Boy Lane where Harringay meets Tottenham? Is there any such thing as West Green!? Yikes.

P.S. On the Dalston example, I used to live round there and no f*cker (to continue the theme) knew that the bit between Stokey and Dalston was in fact Shacklewell.

If you're going to use words like fuck / fucking ( and I wish you wouldn't ) why don't you show the word in full ?  We all know what you mean so what's the point fucking  about with asterisks ?

But I really would prefer you didn't use the ugly word at all. What do others think ? Same goes for sh*t, wa**er etc.

Permalink Reply by Hugh on May 18, 2012 at 19:32
I know what you mean, John. I haven't used it casually and I think it's the first time I've done so in five years. After some careful thought I decided to follow Euan's lead and use an adaptatiom the original title. I kept the asterisks in so as to minimise any offence.

I don't think a lot of those "Green Lanes," answers mean an actual area. They probably think you are lost and giving you a reference point. As a control you could ask the same question on one of the ladder roads, (only joking, one of the rungs of the ladder roads I of course mean.) I reckon a lot of people will say the road name rather than Harringay.

You could ask " Is this Tottenham or Crouch End  ? "

I have to agree with you John. I don't think its clever or witty to use obscenities on HoL, even coyly disguised obscenities; it doesn't add to the website. But to turn to the substance of the post, it has to be a step towards a wider recognition of "Harringay" that this is now part of the title of our local library.

Yes, the library renaming was a small victory. I was truly grateful to the last Head of Libraries for listening to me.

As for the obscentity, Clive. It's not supposed to be either clever or witty.