Last week I had a meeting with Nigel Tyrell, Head of Environmental Services at London Borough of Lewisham. He was responsible for the development of tech-enabled approaches to reporting and managing street problems, e.g. fly tipping.

Haringey Council have been signed up to the Lewisham developed system, Love Clean Streets, for a while now. It's my tool of choice because:

1. There's a smartphone app to make it easy to report problems as you go with little hassle.

2. It's picture-based - I hadn't realised how helpful this is to the Council. It helps them to accurately assess the scale and nature of the problem so they can get an appropriate response out quickly without the need for an inspection visit.

This visual element is also important because it adds a layer to the transparency aspect of problem reporting, giving very graphic record of a problem which, I would have thought, can be used to put pressure on the Council in the event of a poor response.

What's missing is a permenant record. It seems that the system only has a seven day memory. So it's not possible to track problems or the response to them over time.

I've used it before (and Liz has to) and it seemed like the response might be slower than reporting through the more traditional routes. Having talked with Nigel, I thought I'd give it another go. So on the way home from Harringay Station this afternoon, I started putting it through its paces. If you ever walk along it, you'll no doubt be ware of a number of front gardens with an accumulation of rubbish. I had a spate of reporting some of these last autumn. I used a mix of Haringey's own Report-a-problem web service and phone reporting. Both are ok, but I'm not sold on how reports are recorded. The phone service relies on you taking down and keeping a reference, the web one on storing an email.

I noticed four 'blighted' front gardens on my way home. I launched the app on my phone and in each case, snapped a photo, added a couple of words and clicked send to make the report. Simple.

When I got home, I had four email confirmations:

A few minutes later four confirmations that reports had been approved - in other words that a human had looked at them:

Each email provides a link to the individual reports on the Love Clean Streets website: This is reassuring since it gives me confirmation that the report is there and a way to track response.

The Live Map feature on the site shows that my four Wightman reports are currently the only reports live in the borough: 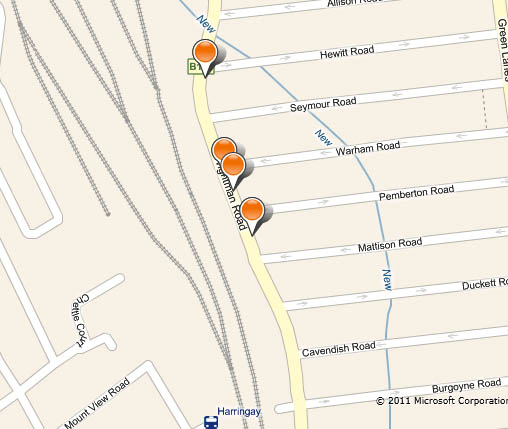 A further search suggests that these four reports plus one more I made using the system in January are the only uses of it in Haringey this year. (you can search at the bottom of this page)

Pity really; it seems like a potentially very powerful system. You don't have to have a smart phone to use it, you can also upload your report via the website. Anyone else fancy joining in and using it to help try and keep Harringay a bit smarter?

Or perhaps we should see how well this batch work first, eh.

(N.B. There's also an app designed to go with Fix-my-Street. I've no idea works better. I'm sure both apps do the job. Pick whichever you prefer)

there's been a sudden and massive increase in dog poo on my road (Elmar Rd), in the last month or so.

short of staking out the street, I've been wondering what to do. I'm going to call the council to see if they've any ideas... but in the meantime I'm going to get me camera out and start uploading to these websites.

I am - sadly I suppose - resigned to the odd example of dog poo knocking about, but there are limits to my ability to perform a perfect-scoring slalom from one end of the street to the other, with a pushchair and a toddler on a scooter!

Here's how one nearby local drew attention to his problem. Flags & very publicly posted photos: 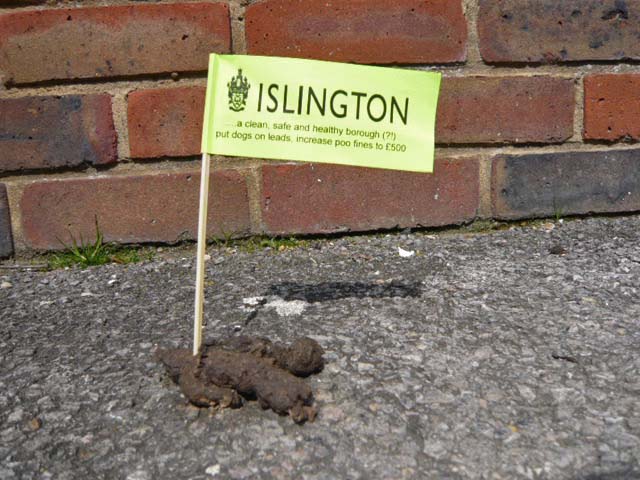 I increasingly think we need to meet dog owners halfway and build dog toilets. I've posted this before but... Holland Park has them so why not Harringay?

Excellent I'm going to give this a try with the daily flytipping on Duckett Road!

Makes sending a photo much easier :)

Permalink Reply by John McMullan on February 22, 2011 at 20:28
I've tried various apps and their one failing seems to be a lack of blessing from the council. This one's now on my thingamajig and I'll use it in anger soon.

Permalink Reply by Hugh on February 23, 2011 at 12:55
I just had a call from Matt Lumsden in the Haringey Policy team and have learned that Love Clean Streets has been in pilot with the borough. This means that there hasn't been full integration between the app and their IT which HAS led to slower response times. Apparently the system works well for them and they're keen to adopt it. But they need approval from the borough's IT board. If they can get this, they'll be raring to go. In the meantime the report a problem site will continue to offer the fastest response.

More openness, honesty and collaboration. I know that's not generally how IT departments function, but it would be very helpful for us to know if our reports are:

a.) being dealt with as a result of reports from the app

b.) being used with some kind of intelligent mapping over time to establish the priority spots for more permanent anti-flytipping measures.

Here is one of the current reports for reference:

Permalink Reply by Yan White on March 12, 2011 at 20:35
The reports seem to be getting dealt with fairly regularly and the Love Clean Streets site allocates different actions for various items.

Here's the hall of shame over the last couple of weeks. 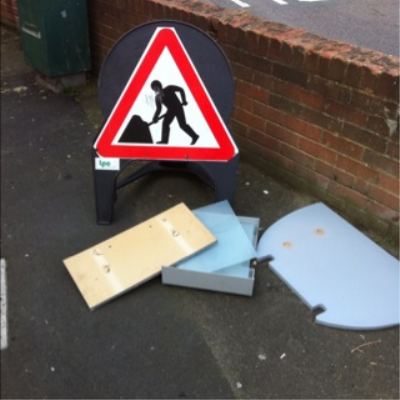 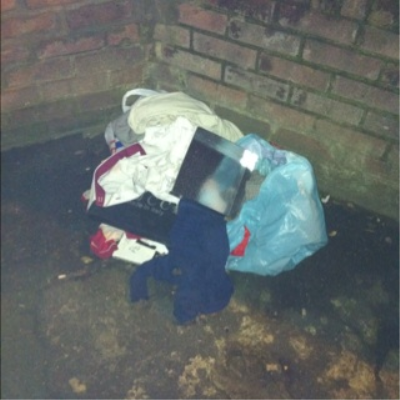 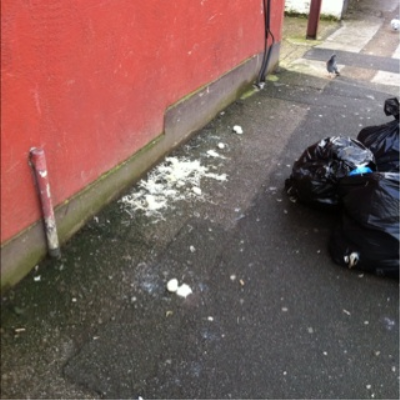 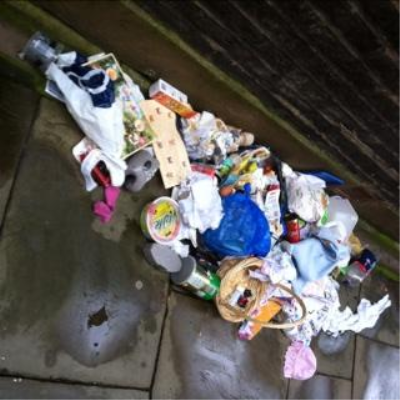 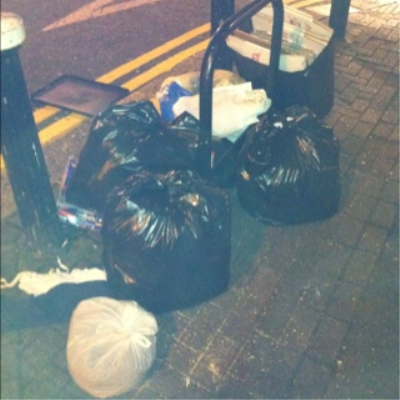 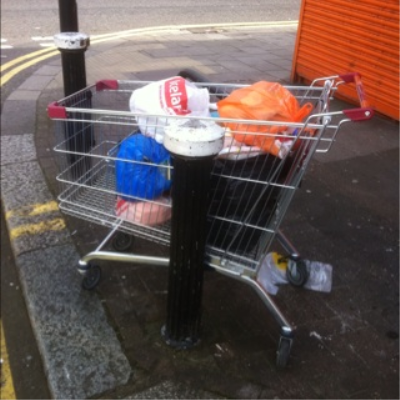 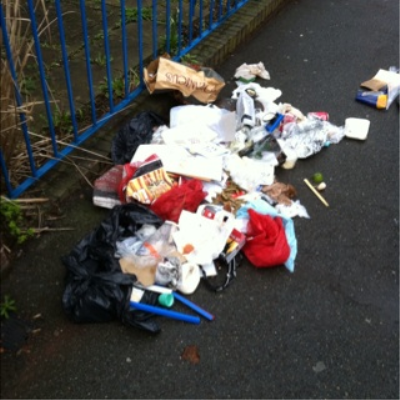 ...And saw this campaign near Blackhorse Road tube station today.

They also have 2 giant billboards up the road. That kind of campaign could work if the council had the will to really get the message out. "We won't stand for it" 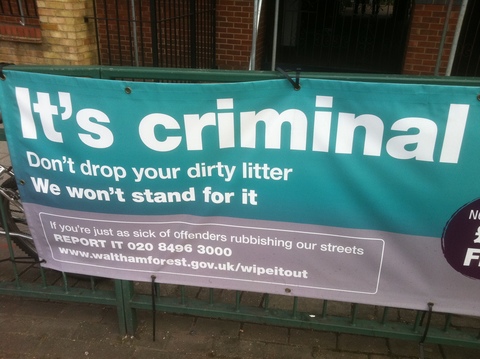 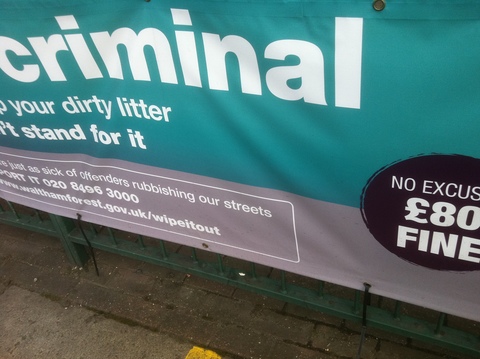 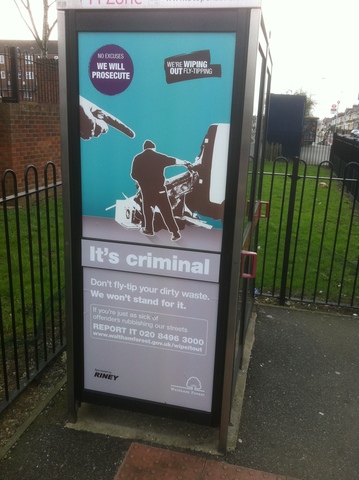 I see that Boris has announced a London-wide scheme, which is based on Lewisham's. It's called

It will be interesting to see how this will fit with either the existing reporting systems; or whatever is introduced by Veolia. (Who told councillors they were keen to explore the potential of mobile phone apps for reporting dumping etc.)

There's a further question of investigating the dumping/flytipping before clearance. For example opening bags to try to identify the culprits.

Talking tough with "We won't stand for it" is all very well. But it's an empty threat without sufficient staff to investigate; and to put together evidence for court cases etc. The cuts mean we'll have fewer enforcement officers.