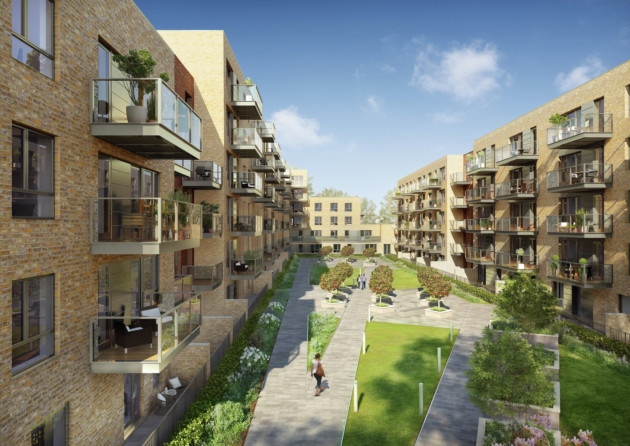 So if you're looking for a modern development flat as an investment or home and have between £300,000 and £500,000 burning a hole in your pocket, head over to www.berkeleygroup.co.uk/new-homes/london/hornsey/smithfield-square.

No, buy a return ticket to Hong Kong and get them there. 9am in Hong Kong is earlier than 9am in London so all the good ones will be gone.

You only need a small (£50K) deposit until it's built too.

When you can have a freehold 2 bed cottage with garden just around the corner ...

Right.  I am in Hong Kong.  Big ads in the papers here.

Marvellous!   Over now to our correspondent in Hong Kong who has been following the marketing of these flats in the local press there.

I don't suppose, Geraldine, that there are some online links you could send?  So we can see how this is being marketed? (And test out Google translate.)

John Mc has of course spelled out some of the implications of this trend with his comments about Woodberry Down.

And so has Peter Rees, the former Chief Planning officer of the City of London. Whatever you think of the buildings his Department approved, he always paid attention to street life.

Which made it even more significant when in April 2014 Peter Rees spoke out on about the dangers of overseas investors "... buying ... apartments, furnishing them, locking the door and leaving them empty”. ...  “Large parts of London are becoming ghost towns and a lot of the young people who come to work here can’t find anywhere to live”.  In another interview saying he was "waiting for the tumbleweeds to start blowing down main street".

Just to be clear, I'm not suggesting London should somehow "pull up the drawbridge" and cease being a world city. That would be economic and cultural suicide.

Alan - no, of course you're not suggesting London pulls up the drawbridge but I can well understand everyone's concern.  In fact, Hong Kong is suffering too.  These advertisements are not directed at Hong Kong people but at rich mainlanders.  They are the ones who buy apartments, furnish them and leave them empty.  It happens here too!

You won't need Google Translate as it's in today's HK Standard, which is an English language paper.  Click on:

You may have to go to the 'flip the pages' version.  The advertisement is on page 15.

Many thanks, Geraldine.  It does indeed help. A timely and clear example of what can happen if the market is simply allowed to let rip.

Zena and I met a software developer who told us she'd been to China to meet colleagues. One of them mentioned that he owned a flat in London. Which he'd bought off-plan as an investment. And which he left empty. Why? He explained that renting it would be like driving a new car out of the garage. Used, the value fell.

That's interesting, Alan.  Mainlanders have bought up so much property here that the market has gone through the roof and out of reach of even well-paid professional people.  There's been a big hoo-ha about it and the government has had to bring in various deterrent measures such as raising stamp duty on luxury property and double duty if you re-sell within two years.  They are also planning more public housing for those who can no longer afford to buy.

I'd never heard the new car equation but it makes perfect sense.  New is good in China!

They seem to have missed out Turnpike Lane from that description of the location.

If a few of us clubbed together in our terrace on the ladder (or the gardens!) and agreed to demolish it and build as they are building here, we could get a nice new home and a million pounds each as well.

But, John, there would be no space for trucks to race between your homes. What would you find to write to HoL about?

In fact what would you do while sitting on your million pound balcony, sipping a cold drink and enjoying the perpetually blue-deepening-to-azure sky and endless puffy white clouds?

The neighbours' cat would never get lost as everyone could immediately spot the bush it was hiding in.

In the same way, you'd never need to go online to find what people were reading. Or the take-away they patronised. "How's the Pizza?" you'd shout down. And they'd hold up fingers to signal the rating.

From my luxury balcony I can see you silent.