I hope all you who have the vote in Harringay will remember tonight ( and certainly other nights to come ) and at the next election vote out the incompetent shower responsible for the introduction of the LTN.

My weekly 5-minute journey from Wightman Road to Green Lanes took 45 minutes, including  30 minutes to go the length of Hampden Road. Yes, I know that there was a burst water main. But in happier times traffic would have been distributed across the roads now blocked off and not confined to Green Lanes. Yes, I know that I could have taken a bus to sit in the same traffic jam as I did this evening but in any case there aren't any buses between my house and the bottom of Effingham Road.

I understand the concerns of those residents living in the LTN who hope that the pollution in their streets will be reduced but don't the residents of Green Lanes, Turnpike Lane and Wightman Road breathe ? don't their children have lungs ?. Where did the Council think the LTN traffic would go ?

And please don't suggest to this disabled person that I could have cycled.  I couldn't.

Mike Hakata, cabinet member for climate action, environment and transport, confirmed that there is no agreement for dockless e-bikes to park in Haringey’

if there was an agreement with parking spaces like in Camden we would see more bikes kept to their allocated spaces. But Haringey haven’t bothered to form an agreement. You can see this from the fact there are no designated hire parking spaces in Haringey.

Small  electric hire vehicles are a great solution, space  needs to be provided for them.

I'm in Camden most days and it's no better there. People still just leave the bike wherever they finish the journey. The scooters are in bays and no-one seems to use them.

As an aside, related to a discussion we had somewhere else on here, I tried the LimePrime but still get charged for all rides, regardless of length. Not sure what you are signed up to but the 21p a minute makes Lime very expensive.

I was there today and they were parked on the pavement on Camden High Street and again in King’s Cross and Euston Station.  One local wag has been creating sculptures from discarded bikes 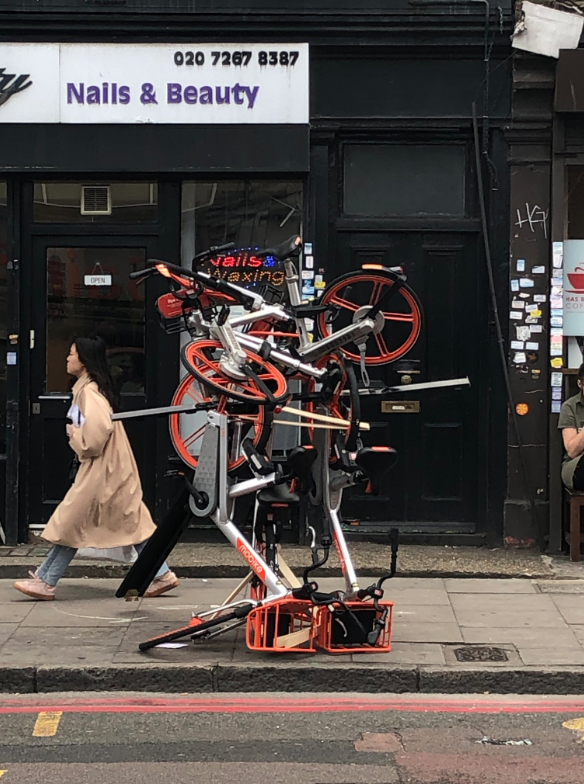 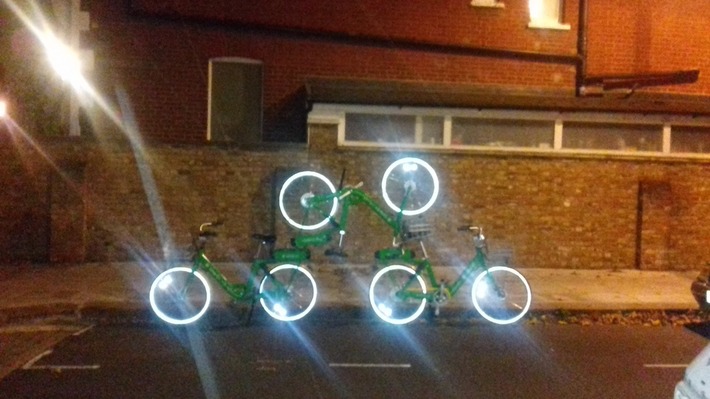 i can understand Haringey’s reticence to see them invade the borough’s public space.

Rory — As a St Ann’s resident of over 30 years, I conclude I must have been in something of a hallucinogenic state — my road has always been so quiet, learner drivers use it to practice three-point turns and small children go on bike skills courses; I could have walked down the centre of the road at midday with almost no chance of meeting a car. But, according to the council, my life was actually being made hell by 24 hour a day maniacs following satnavs through the area, so clearly I must have been dreaming or deluded, because they must know better than I do…. The LTN benefit? Motorbikes and scooters now use it as a racetrack — thanks, LTN. Just three roads in St Ann’s were a problem; the total number of accidents across the whole ward pre-pandemic was a fraction of those on just WGR, let alone GL.

I’ve spent plenty of cold, wet, winter evenings waiting for buses on Camden Road as full 29s sail past, and being on one after 10.30pm on a Friday or Saturday can be just as unpleasant as Livi said above, so I know where I’d rather be — in a taxi (I don’t drive). My experienes weren’t all bad, of course, but the only way to get people out of cars is to offer viable alternatives — fast, frequent, convenient, reliable, safe, inexpensive public transport would be a good place to start.

LTNs work by increasing the hassle for drivers, not by offering alternatives to encourage them. My periodic journey to an NHS clinic in Hoxton — currently in a cab while I have mobility problems — is a whole mile longer than it needs be, thanks to Hackney’s LTN road closures. How is it helping anyone by creating an area with boundaries so solid that anyone entering has to take a longer, more polluting, route? No, buses don’t go there and I physically can’t cycle, so there isn’t a viable alternative.

Making “your car journey so onerous that you find another means of transport” requires there to be realistic alternatives; neither Haringey nor central government is offering these. Sort out GL, prioritise public transport, deal with outer London commuters at source and you might get somewhere; just make life harder for everyone by increasing traffic delays, journey times, pollution and frustration without offering anything better and all you do is p*** people off — the title of this thread…..

Once again, Don, (I feel it's been said a lot here) in the long term, LTNs reduce traffic on main, arterial roads and banish it pretty much entirely from roads inside the LTN. The result is reduced traffic and therefore less noise and air pollution for residents and movement towards meeting goals to combat global warming and the current climate emergency. The status quo is unacceptable on a local and global level. That's why people support them. So there it is. Less cars, less pollution, better health outcomes for residents of Haringey and maybe a better outcome for our children and grandchildren. I've yet to see a single post from people in opposition to LTNs with any credible answer to the local pollution and global environment crisis. What's your solution, Don? After you've presumably dismantled all the LTNs and reinstated the status quo and all the local traffic once again flows like the fast-moving river we all remember, because honestly, I'm all ears.

Rory — I’m not going to re-post all the stuff I’ve previously said ( you can find it on this and several other threads if you want), but, in essence, it’s:

Electrify all Haringey council vehicles; ban Veolia, DPD, BT, etc from operating across the whole of London unless they use electric vehicles.

Set up lamp-post EV charging points across the whole of Haringey and negotiate a favourable tariff for residents.

Nationally, an overhaul of train fares, services, reliability and overcrowding is desperately needed to make commuting by train a viable alternative to cars. The government ban on petrol vehicles needs to be backed up by a nationwide state grid of EV charging points and a national tariff, not left to piecemeal and haphazard provision by “the market”, so that people know they’ll arrive once they set off.

In London, there needs to be co-ordinated action across all boroughs, not random outbursts of restrictions where councils have to retaliate for what’s happened next door (cf Bounds Green/Enfield LTNs) and kick the problem down the road to the next borough. It needs joined-up and holistic thinking, not intermittent disruption and ideas designed just to put people off by making their journeys harder and hoping they’ll do something else.

Oh, yes — and it requires money. Lots of it. (Walthamstow Village LTN cost £20 million; imagine that at scale across London) If the government was serious about this, funds would be available, but they’re not. So we get CCTV and flowerpots that don’t solve anything but only cost peanuts. Lead from the front and people will follow; tell everyone else to do something but do nothing yourself (council failure) and you won’t achieve anything.

A gathering=in of everyone's scattered points could be helpful. I've suggested this to Mike Hakata.

This New Scientist article on LTNs and air pollution is worth a read.

EMC2
Hmm. The New Scientist article also states:
". . . concentrations of nitrogen dioxide fell by 5.7 per cent within the LTNs and by just under 8.9 per cent on their boundaries."  [my italics.)

That research the article states, was based on data supplied by Islington Council.

But then what did you make of this apology by Islington earlier this year?
https://www.mylondon.news/news/north-london-news/islington-council-...

We seem to be in both senses, going around the houses.
I dunno about you, but I'm reluctant to trust anything less than completely independent no-skin-in-the-game university conducted data collection and analysis.

The fable of the Boy who cried 'Wolf! and the poem about Matilda who shouted 'Fire!' are intended to teach lessons to children. But not perhaps all politicians and Council PR Departments?

As E.E. Cummings another poet, once told us.

"... children guessed (but only a few
and down they forgot as up they grew"

It’s true generally that when you make better and bigger roads in highly concentrated urban areas , you very quickly get more traffic. So no doubt the opposite happens. The only question for me is was this a well managed programme? Did the community feel like they prepared well in advance? Were innovative new solutions ready to be employed to mitigate? Has risk been assessed for emergency services etc.

The M25 is a good example of vehicles filling the available space. When it was opened in 1986 it was the solution. Now it’s just another traffic problem.