No Right Turn - what if we all got one?

One of the options now being looked at on Hewit Rd instead of changing its direction is to have a No Right Turn out of it on to Green Lanes, so i've wondered a bit about No Right Turns. They seem easier to get done than some other changes and people accept them more readily even though in some places they can have quite a dramatic traffic reduction effect as similar as blocking off a road completely.

There are a few existing ones around Harringay to look at to see how they work, on Willougby Rd, Lothair Rd North and South, and a couple over the tracks at Inderwick Rd and Nelson Rd. The Lothair Rd S one is interesting. it happened relatively recently (2008) and still has documents up on the council website, the consultation and report, which shows us how they got it to happen. They had a meeting between residents and the council in December 2006 asking for it and then it got made in Feb 2008.

So where else in Harringay could use a No Right Turn?

Out of Umfreville to Wightman Rd would stop all the traffic that uses Umfreville to bypass Green Lanes, someone even asked for that in the Green Lanes statutory notification, and it could be made exactly like the Lothair Rd South one.

A No Right Turn from Green Lanes into Falkland would prevent all the traffic it gets from Alfoxton Ave/West Green Rd. That could be done like the Lothair Rd N one and with the new pedestrian crossing going in on Green Lanes by Falkland it would be relatively easy to just extend the central island down a bit to block the right turn. That would be good for the northern Ladder plan too because then we wouldn't need to change the Falkland direction.

Where else? It seems like now might be a good time to be asking, who else wants one?

What do other Falkland Road residents think?

Sadly this didn't make the Tuesday Ketchup so we may have to do some door knocking to find what Falkland Road and other residents think. So far the several i've talked to are very supportive.

As it seems better all around I've updated the Northern Ladder Traffic Reduction Proposal so that it uses the No Right Turn into Falkland instead of the direction change.

Here's a map showing the traffic reducing things around Harringay. The red points are where a street is blocked completely, the yellow points where its something like a No Right Turn, and the green points where traffic can pass but its limited, eg  by width. Its just from trawling around on Google Streetview so not complete so say if you know of other points to add.

It shows an interesting picture of how traffic reduction has been happening around the Ladder. It doesn't at all look like there is some big plan that the council is working on to make things better, more just random things that happen when some active residents make a fuss and get something to happen for their bit.

The Ladder area is really missing out on anything compared to other places around us. The three red markers at the bottom right are what makes the Hermitage Rd area through traffic free. The two red ones on the middle right are what keep the Gardens completely throught traffic free. Just above those there are three points for the Woodlands park area, it looks like they could do with one more, but it may be that there is already something else that i've missed.

The two yellow and one red on the middle left are interesting, in the gating Wightman Rd thread it was commented that it would force traffic down Oakfield Rd, it wouldn't. Those three points mean that the entire east of Stroud Green is already through traffic free, and the through traffic that they used to get now probably mostly goes on ... Wightman Rd and the the Ladder rungs.

Print this out and we must get it in front of the council at the next GLSG meeting, Andy Newman style. Brilliant work!

Here's an interesting thing which that map makes easier to see, and which adds to the cause for the No Right Turn into Falkland Rd: The blocking of Harringay Rd in the Woodlands Park area has massively increased the traffic on Falkland Rd. Here's what happened before Harringay Rd got blocked: 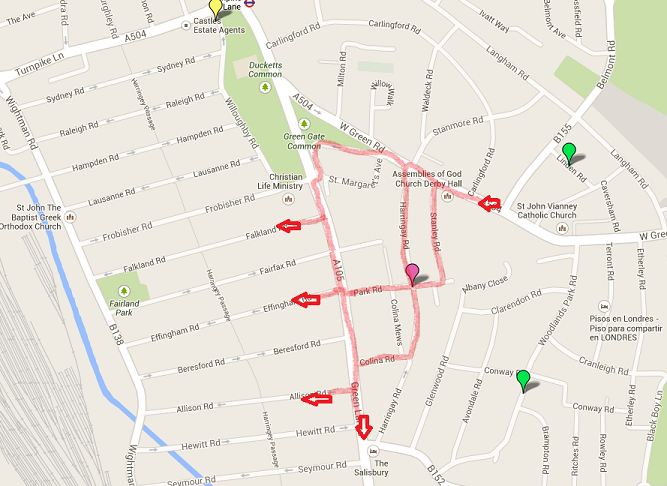 Then Harringay Rd was blocked off in the middle which made Harringay and Stanley Rd through traffic free, but most of that south west bound traffic that used to get spread across several Ladder rungs now mostly goes just on Falkland Rd, no wonder its so busy: 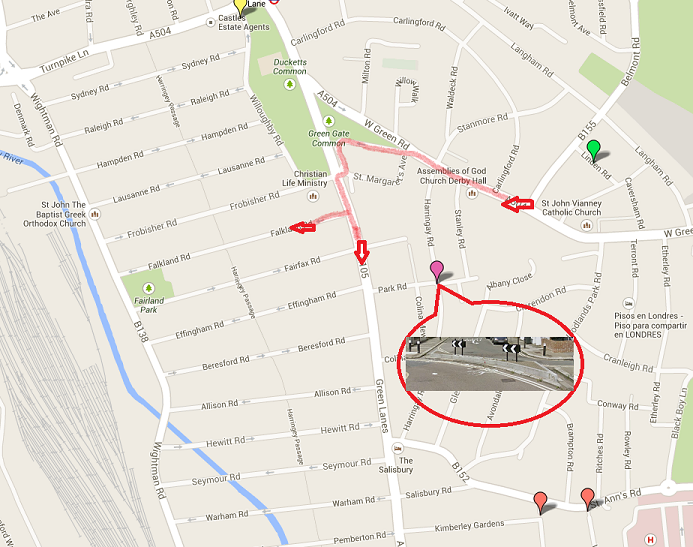 Again... these are brilliant, get them in front of Tony Kennedy at the GLSG, a la Andy Newman.

This is excellent Ant, thank you. Another example where road closures have been made around the Ladder without due consideration of the effect to Ladder roads.

Do you know when these changes were made? I wonder whether any traffic modelling was undertaken before and after these closures were put in place.

Do any long term Falkland Road residents know whether there was a spike in traffic when these closures came into effect (I imagine there was)?

@John: Tony Kennedy is away on summer holidays at the moment, and the next GLSG meeting isn't till September. Lets use the time till then to work out some concrete things to ask for.

@Nicholas: No I don't know when the Harringay Rd changes were done. I doubt there was much modelling done after to see where the traffic went, that doesn't seem to be the way they do things, eg, the Head of Haringey Transport told us they didn't do any when the Gardens got closed off - "The traffic surveys which were undertaken following these closures were limited to the assessing the impact on flows on the closed roads or the Green Lanes/St Anne’s junction and did not assess whether traffic would be dispersed over a wider area."

Isn't there a councillor that lives on Effingham Rd - maybe she would know when & why the blocking off of Harringay Rd was put in. Same person might find the 'no right turn' into Falkland Rd a problem ... for Effingham :) Solution; also a no right turn for Effingham. Yes, we see there this is going ...

Continuing using that map to try to see what the existing restrictions have done to the Ladder, here's the road closure and No Right Turns over in Stroud Green with the traffic heading north / north east.

Before traffic could cut through the east of Stroud Green (there were a bunch of routes, i've only shown the main ones): 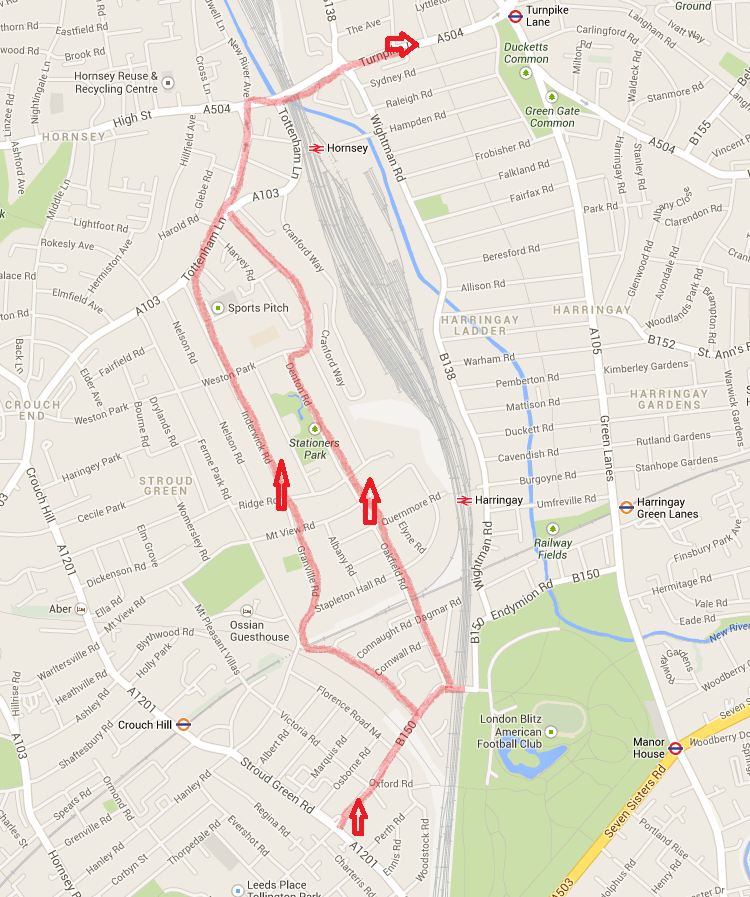 Then they closed Uplands Rd and added a couple of No Right Turns on Tottenham Lane so the area shaded in yellow becomes through traffic free and instead most of that trafficit goes via the Ladder (and nearly all of it on Frobisher, Fairfax and Beresford): 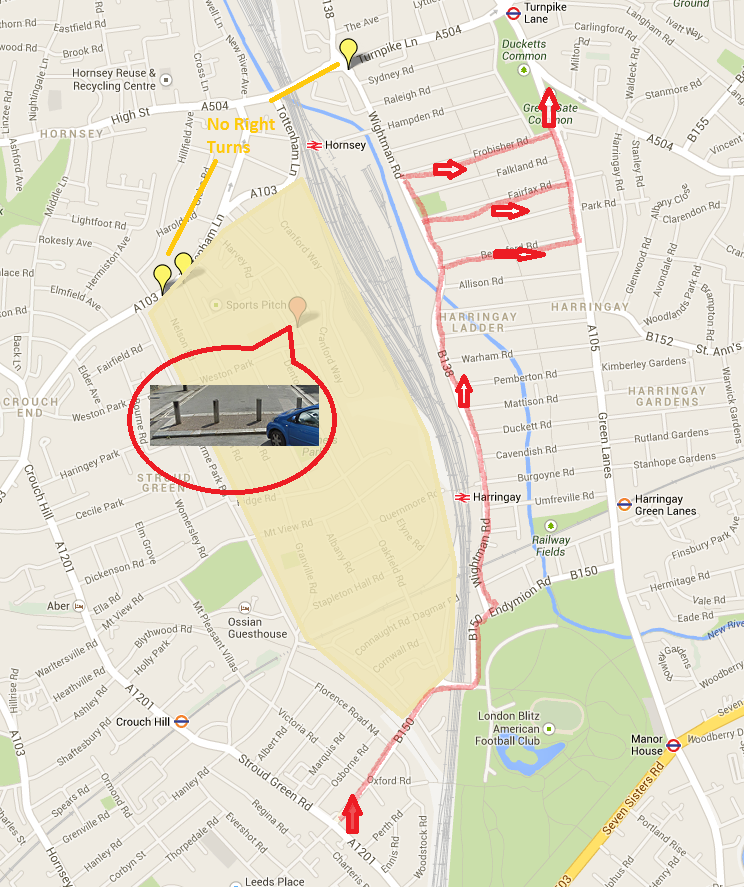 Thanks, i've added that Park Ridings point on the map. There's also several things going on for the Hornsey Community Streets project but they're too new to show on Streetview yet.

You're absolutely right. Have a look through the previous posts on here (click on the traffic tag under Ant's original post) and you'll see a lot of people agree with you. We're pretty certain that about two thirds of the traffic on Wightman Rd is actually heading east/west from a study we did a couple of years ago, it wants to get over the railway.