I recently came across a marvellous set of late nineteenth and early twentieth century magic lantern slides. They show a slice of life inside the Laurels in Hornsey. I've found mention of a Laurels in Tottenham Lane through a record of their selling a parcel of land to the Great Northern Railway Company. 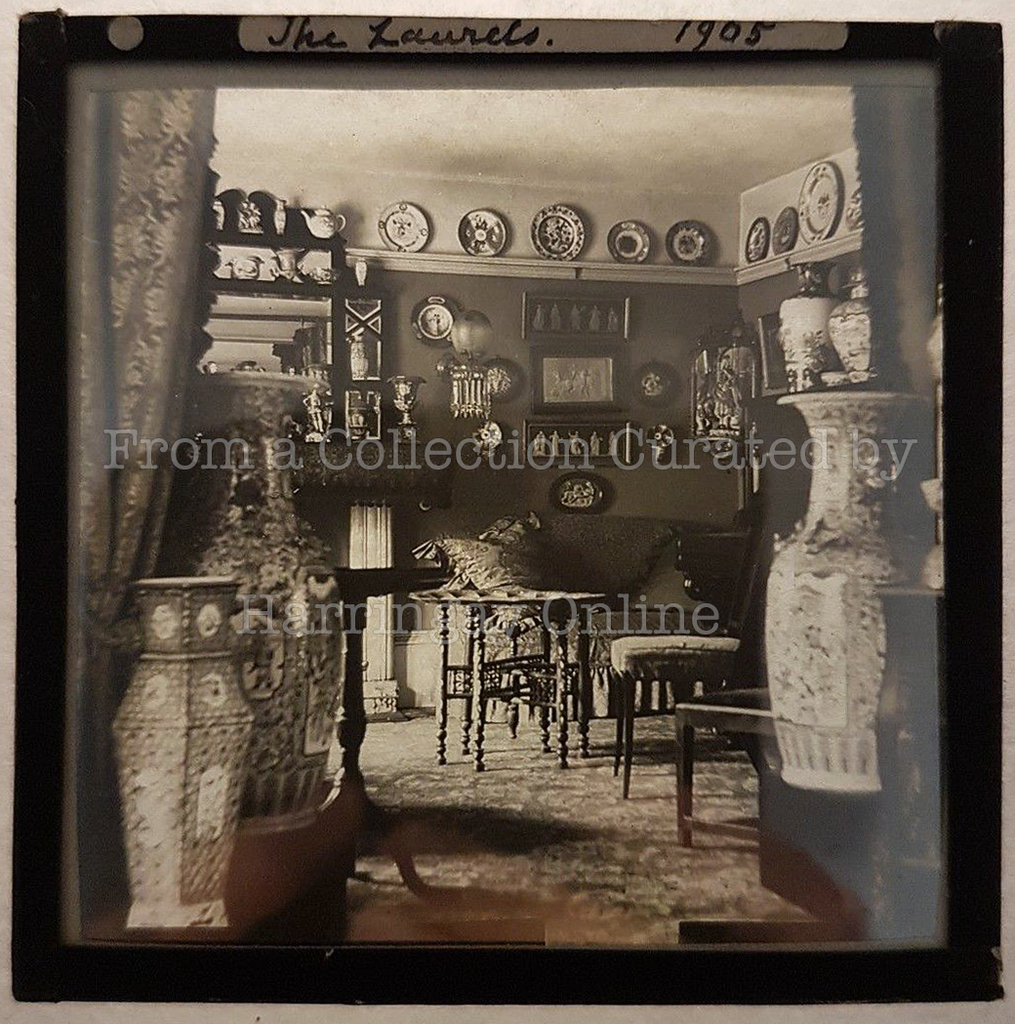 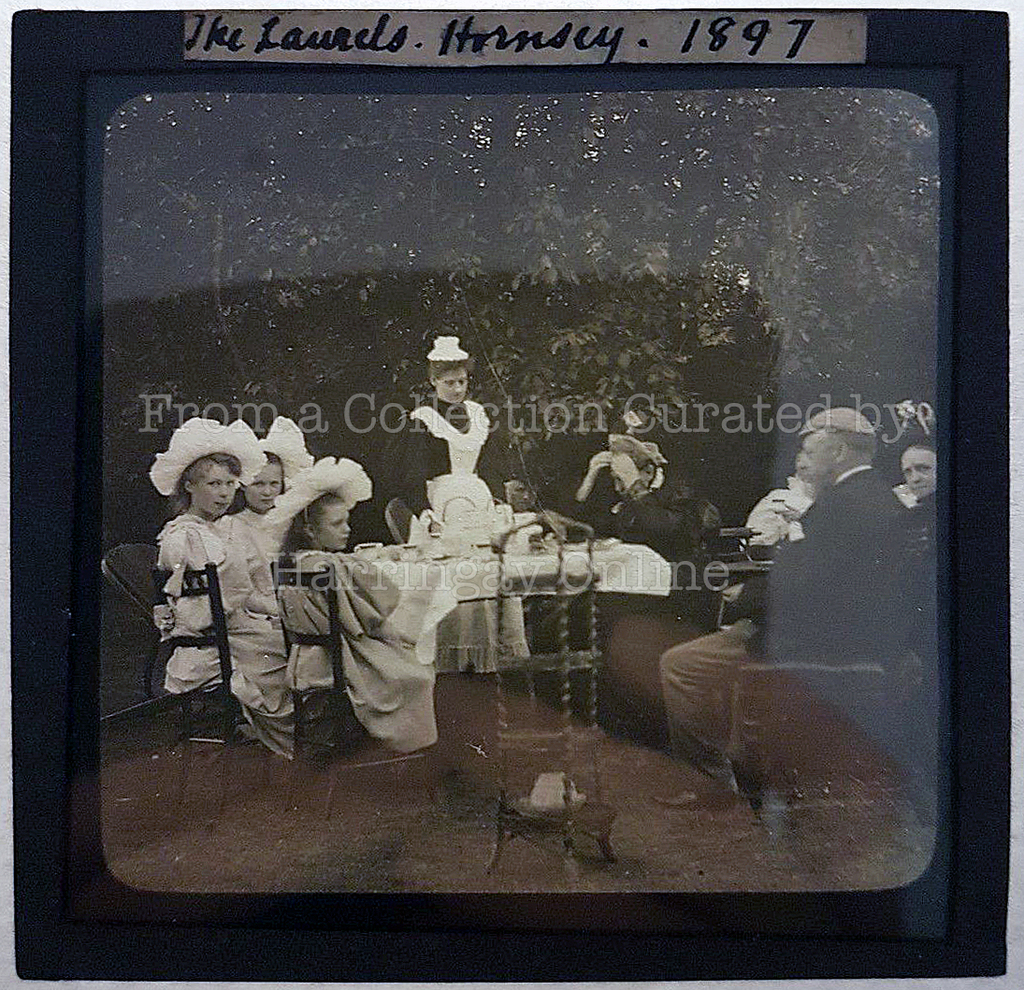 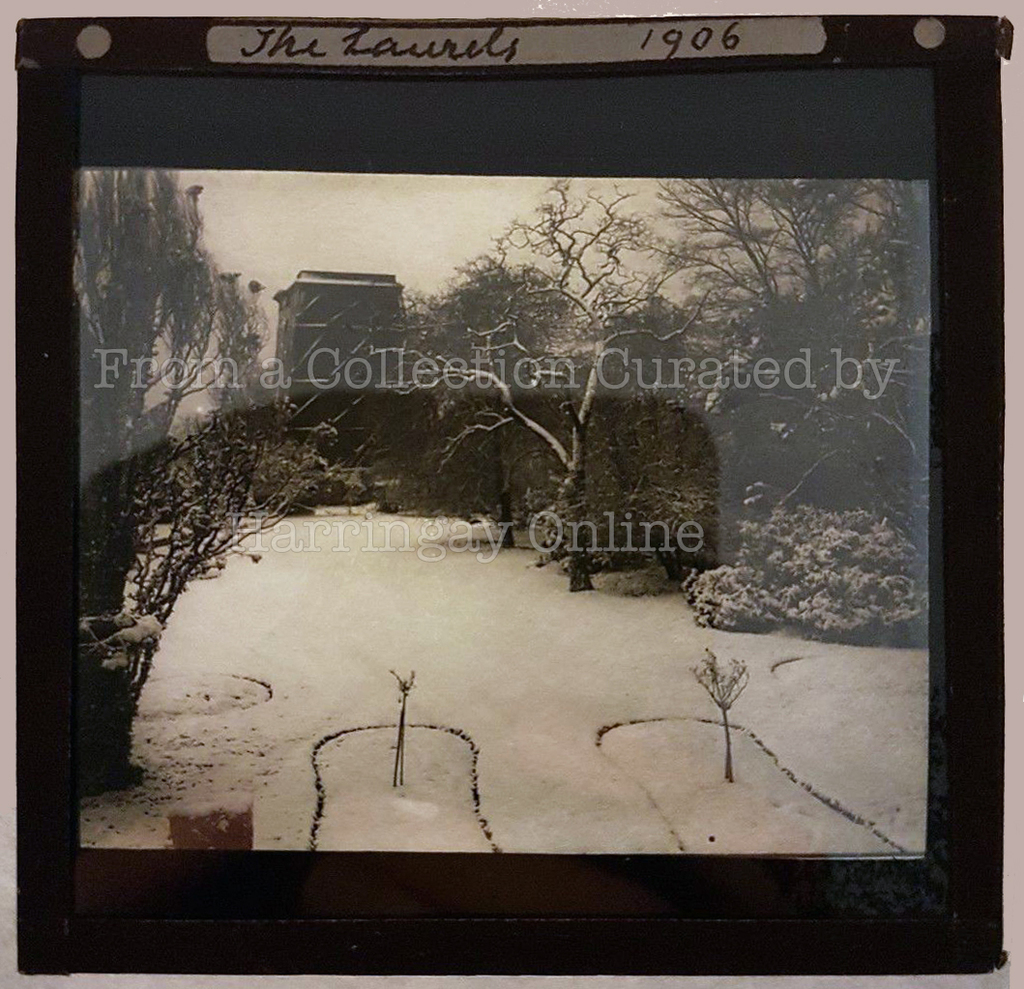 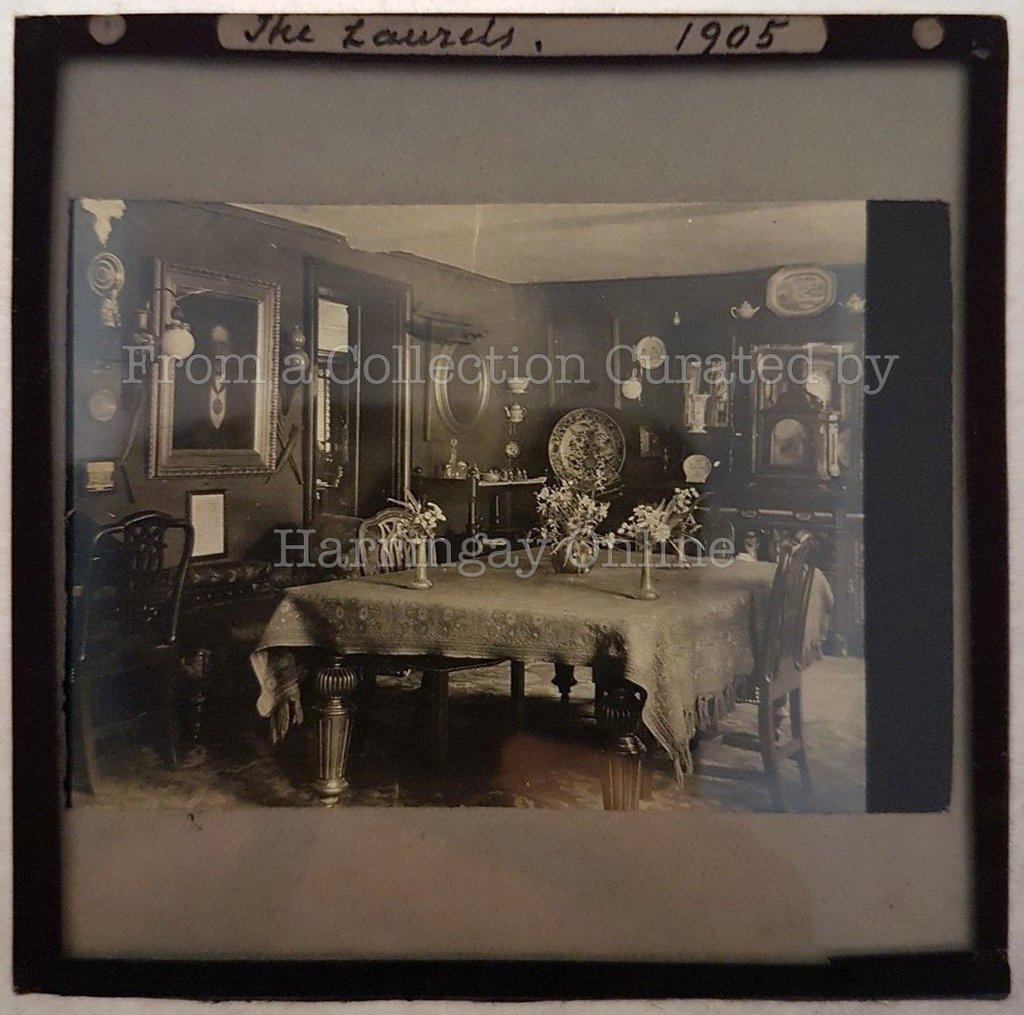 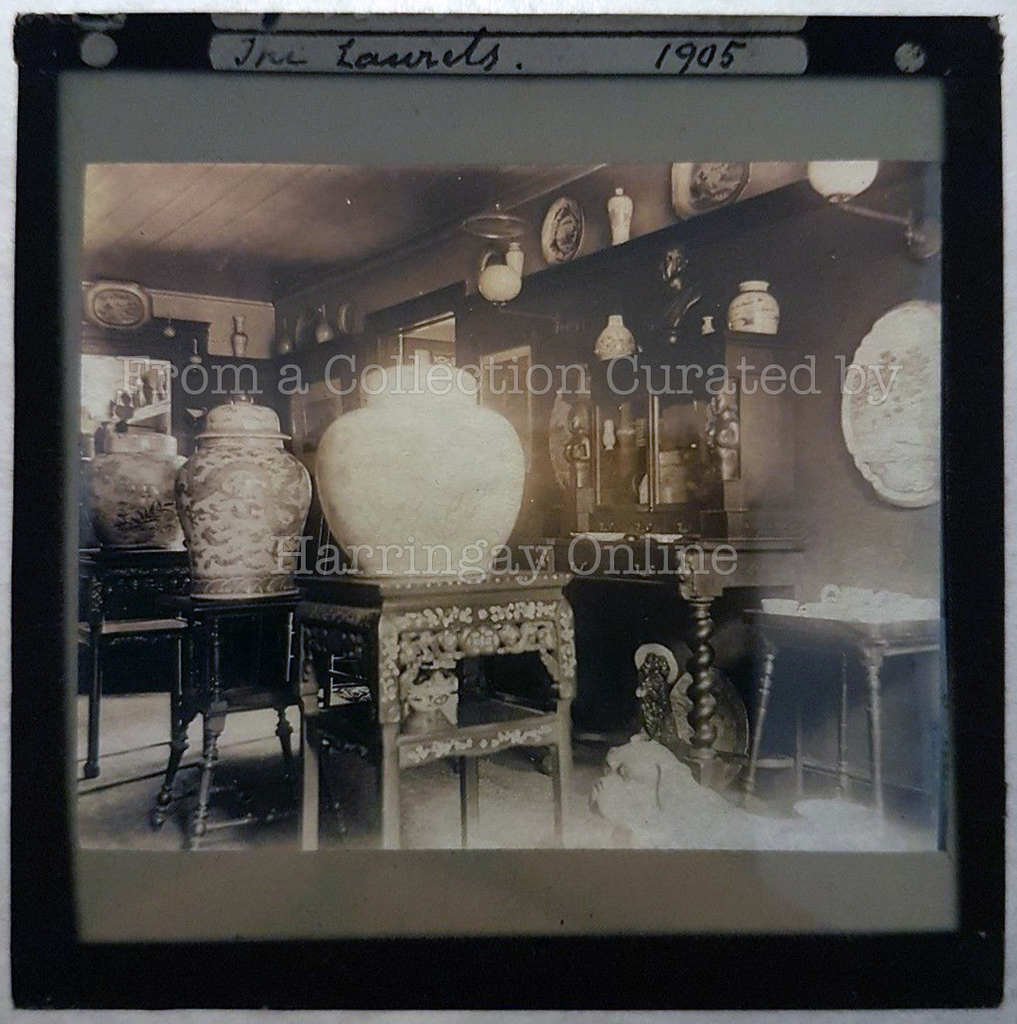 The map snippet below  from the 1893 Ordnance Survey shows the location of the house. 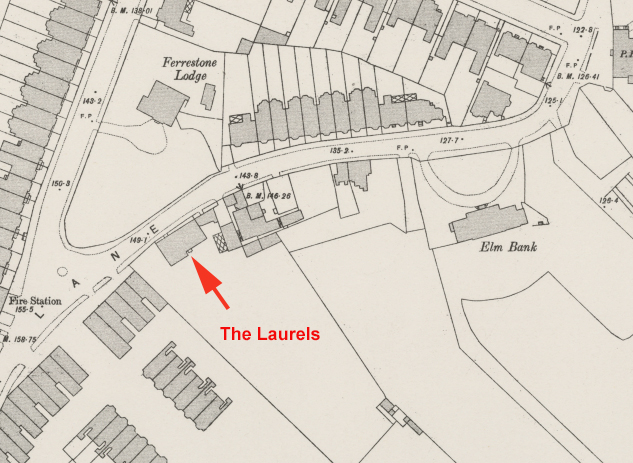 The house was also shown on the 1869 map. By the early 20th century, it was being encroached on by the new electricity works next door (1938 OS below). It seems to have survived until shortly after the war when the house was demolished and the land was taken over by the electricity company (1955 OS below). The occupant of The Laurels for much of the last part of its life, and at the time the photos were taken was one Edward Charles Cornish. Born on 8th July 1845 to parents James and Sarah Cornish, Edward grew up above his father's bookselling business at 297 High Holborn, just to the west of Chancery Lane. By the time of 1851 census, his younger brother, James, his 18 year old cousin Thomas and two servants were also living at 297.

James Snr died in 1873 and Edward took over the business together with his brothers James and Alfred. They ran it as James Cornish & Sons up to 1912 from the same High Holborn premises.

By the time of 1881 census, Edward was 35. He was living at 1 Florence Villa, Bounds Green Road, apparently still a bachelor and described as a bookseller. Before the end of the decade he had moved into The Laurels.

Edward seems never to have married, By 1901, aged 55, he was living with two servants and a boarder Lilly Bale, four years his senior. By 1911, he was described as a publisher and still apparently unmarried. Still living with him was Louisa Ellen Bale ( I assume the person previously described aa Lilly).

Edward died in 1924, splitting his estate evenly between Louisa and one Cornelius Combidge, bookseller. Louisa seems to have stayed in the house for another year or two, but from 1927, the property's occupant is listed as Clifford March. In 1939 March was appointed as Deputy Chief Electrical Engineer for the Hornsey Electrical Company. He is listed as residing in Sussex Way, Barnet. So I suspect that the house had been purchased by the company and was being used as offices.

In 1948, March was appointed as acting chief engineer. Shortly after, the house was demolished and the land subsumed into the company's plot. Perhaps this had been inevitable since the arrival of the electricity company. In fact they purchased a large part of The Laurels's garden as early as 1900.

Looking back before Cornish's time, the 1861 census shows the occupant of The Laurels as Charles H Ashley. Whilst he is described in the records simply as 'Newspaper Reporter', he was in fact rather more than that.

Born in Sheffield in 1834, where his father kept a hotel, Ashley was apprenticed to the printing trade on the Sheffield Times. He developed an interest in sport and took on reporting horse racing for the paper. In 1862, at the age of 28, he joined Sporting Life as a racing reporter. He then became principal reporter on The Sportsman when it launched in 1865. Very much the entrepreneur, he left soon after to set up a sporting news agency supplying sporting information to a variety of newspapers. In 1874 Ashley returned to The Sportsman when he became its co-owner.

The census records for 1871 show Ashley as still in residence. However, I cannot trace exactly when he moved on. The 1851 census gives no house names, making it equally difficult to link owner to property.

The Post Office Directory for 1880 gives us the occupant name of John Maskell, but he was no longer in occupation by 1882.

The 1879 register of electors shows an Arthur C Thrope in residence. The 1881 census shows Arthur C Thorpe and his wife, Mary, together with their 21 and 20-year-old sons Arthur and Elphinstone and their 7-year-old daughter, Edith. Thorpe was a jeweller and his 21-year-old son, Arthur a diamond broker. he family were still recorded as being in residence in the 1886 register of electors.

Two years later they had moved to 29 Endymion Road and by 1891 were at 476 Seven Sisters Road, a grand house with a circular drive (almost opposite this one) that backed on to Woodberry Down. By this time Thorpe senior was also describing himself as a diamond broker.

I don't know if Ashley was the first tenant of the house. But  I suspect not. The Victoria County History tells us that

In the early 19th century buildings were scattered along the east side of Tottenham Lane from near the junction with Church Lane to near the modern Ferme Park Road.

So, it may be that the house dates back to the earlier Nineteenth Century. Although, it's diffcult to be sure, the 1815 enclosure Map suggests that it does. 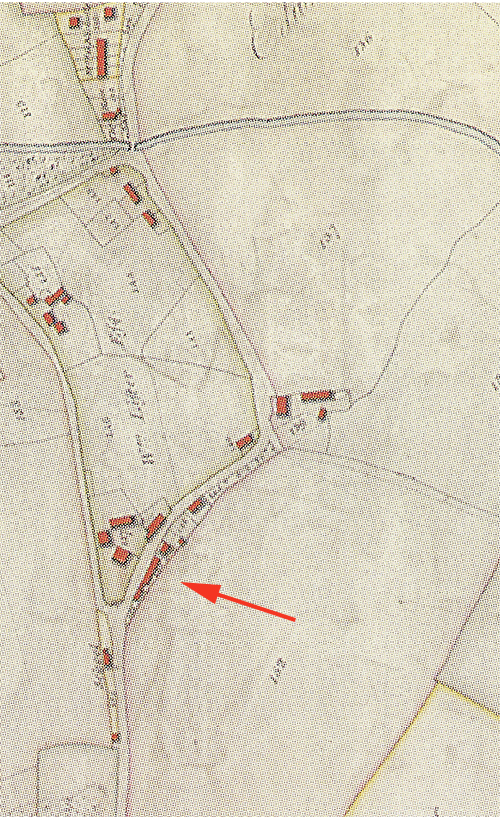 The 1807 Ordnance Survey Drawing is similarly inconclusive, but it shows a large house in the right position to be The Laurels.

You really wouldn't want your kids running riot among that lot!

I was looking for references to ' The Laurels' and came across an interesting article on the developement of Hornsey  http://www.british-history.ac.uk/vch/middx/vol6/pp111-122

...and a page attached from London: A Social History by Roy Porter, which probably refers to the same house.

The book referenced in the article is 'The diary of a nobody' by George and Weedon Grossmith. First published in 1892.

Entirely fictional but gives a comical record of the daily grind. Fun read.

Great photos, Hugh! Thanks for sharing. It's hard to find pictures of the interior from that era. Where did you come across them?

Bruce Castle has loads of pictures from that time but mainly exterior.

John D - Just what I was thinking.  All that bric a brac and chinoiserie to dust.  No wonder they needed housemaids.

Permalink Reply by Lesley Ramm on May 17, 2017 at 20:06
These are lovely. Hornsey Historical Society members will love them. Great find

Is that a sculpture of a dog or a real one in the last two shots?  And someone shrunk that vase on the nearest table in the centre of the room!!

Perhaps the photographer was taking so long that one of the little girls looks away and the old woman in the centre has given up the will to live. Though maybe its the opposite, Its unusual in that its not particularly 'staged' with some family members being obscured by others, some disappearing off frame, a barely visible head with mutton chops in the centre and some ignoring the event entirely. Its almost 'not another shot!' and they look remarkably like a downscaled Queen Victoria and Prince Edward with the cap.