Is this a Hornsey Parish Boundary Marker?

Can anyone tell me anything about this object? 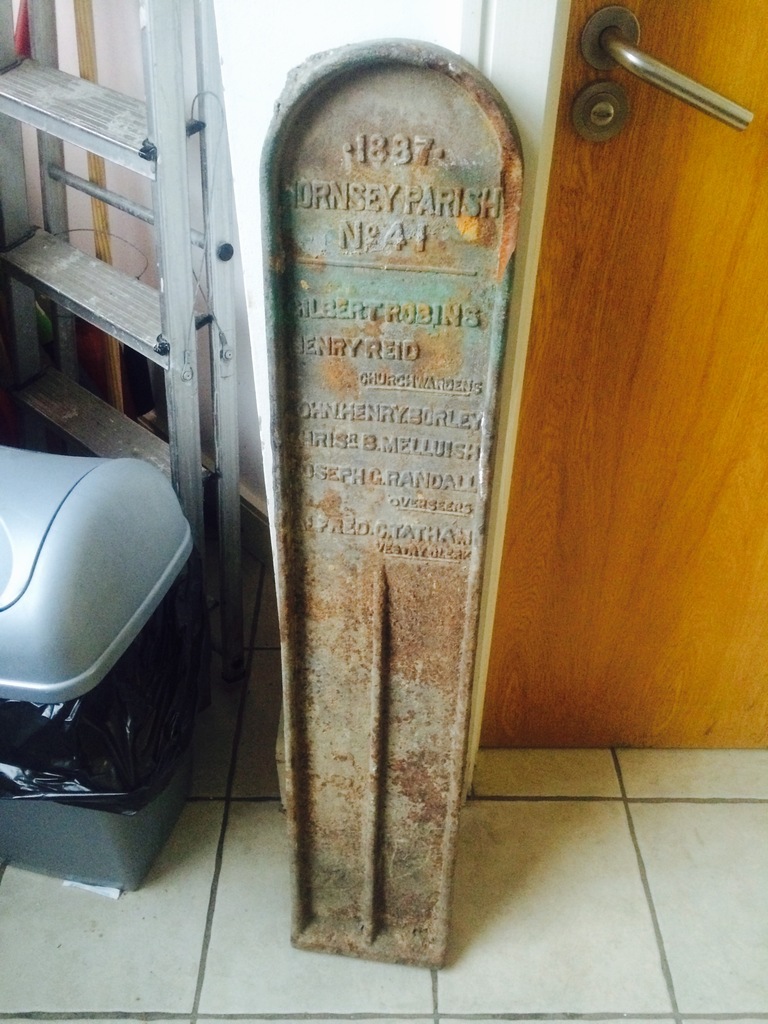 Hugh, where is this? Will ask HHS and get back to you. Most I have seen are shorter/wider but perhaps most is buried. Is it for sake somewhere?  Council very poor at protecting parish boundary markers. Looks real to me

It's been rescued from a building job and given to me - more about our heritage heroes anon.

I'd be grateful for anything you can find out.

There are plenty to be seen on flickr https://www.flickr.com/search/?q=Hornsey%20Parish%20Boundary%201887

It would good to know how the numbering system worked - then we might be able to find out it's original location and finally liberate it. :-)

Thanks Stephen. It's liberated. My job now is to find it a good home.

That’s a lovely thing Hugh. I don’t know where 1887 Hornsey Parish Boundary marker No 41 should have been, but marker No 435 is still in place on the north side of Newland Road N8, on the boundary with Alexandra Park, which is in Wood Green parish – see photo taken today. Hugh - I've asked the churchwardens at Hornsey Parish Church if they have any ideas.

Bethany, did you ever hear anything back the the wardens?

No, I didn't - and the wardens have changed at least once since then - will have another go.

There are two of these either side of Mount View Road, on the border with Islington.

Cheers chaps. They seem (unsurprisingly) to be all over the place. I'd never previously been aware of them.

By way of an update, last year Bruce Castle Museum agreed to take this marker. It is now with them.

Trying to help Jim out with his Turnpike Lane stone, I came across an archive up at Bruce Castle Museum that has given the original location of this marker.

In the List of boundary markers placed during perambulation, 1887-88, boundary marker 41 is described as follows: Marker number 41 - beside black fence of "Queen's Head" Garden in line of ditch outside hedgerow.

So it was local after all!

Of course in 1887/88, the Ladder wasn't finished and the 18th century Queen's Head was still standing. I suppose we can assume that marker 41 was one of those shown behind the old pub in the 1893 map below. And it looks like that spot would have ended up in the garden on 93 or 95 Falkland Road or possibly 100 Frobisher Road. I have no idea how it moved from there to a builder's skip! Can anyone cast any light on this mystery?

It's about time I thanked Reuben (formerly working in Harringay, now of Hunters Stoke Newington Church Street) who rescued the marker and passed it on to me. Thank you Reuben!