In defence of the magpie

The first magpie ran quickly and elegantly along the middle of the lower roof before ascending, with ease, the steeper brick wall that separates one roof from the next. Stepping out like an adept tight rope walker, he quickly located something to eat on the far side and disappeared briefly from view. Seconds later, he was balanced back on the apex of the roof, now using his powerful beak to open up whatever titbit he'd found there. Then he bounced over to the chimney, pausing for a moment to contemplate the vertical wall in front of him before hopping high in the air and landing with ease on a ledge half way up.

In the meantime, a second magpie came speedily bobbing up the slick slates of the roof of the neighbouring house, ascended the precipitous slope between roofs but did not linger, preferring to move back the way it had come over the roof tops and out of sight. The other magpie dropped down from its chimney look out and was gone.

Watching them confidently swaggering up the slippery, pitched roofs of the houses, expertly jumping onto chimney stacks and perching on the pots, it's not hard to see where the myth that the saved magpies perched on the roof of Noah's Ark, refusing to enter and "jabbering over the drowning world,"  came from. This arrogant behaviour unfortunately got them the reputation for being associated with the Devil, which they've found hard to shake off ever since. Things don't get much better when they find themselves with all the other members of the bird kingdom at the death of Jesus, since they are reputed to have refused to sing to comfort Him on the cross, although given the croaking nature of their calls perhaps they were just sparing Him from the din. Whenever they find themselves at these momentous Christian occasions, magpies just refuse to conform.

According to folklore, a single magpie is bad luck, " one for sorrow", and, to avert this bad luck, one should greet it with "Good morning, Mr Magpie. How is your lady wife today?" thereby warding off the sorrow. The origin for this ritual seems to be that by implying that the magpie's wife is nearby you are, in fact, going to see two magpies and this will reap good luck "two for joy." Magpies mate for life and so greeting his wife is showing him and his family respect, although I'm not sure how you know if you are addressing the male or his missus. Counting magpies enables you to foretell the future, "three for a funeral, four for a birth," with variations across the country. 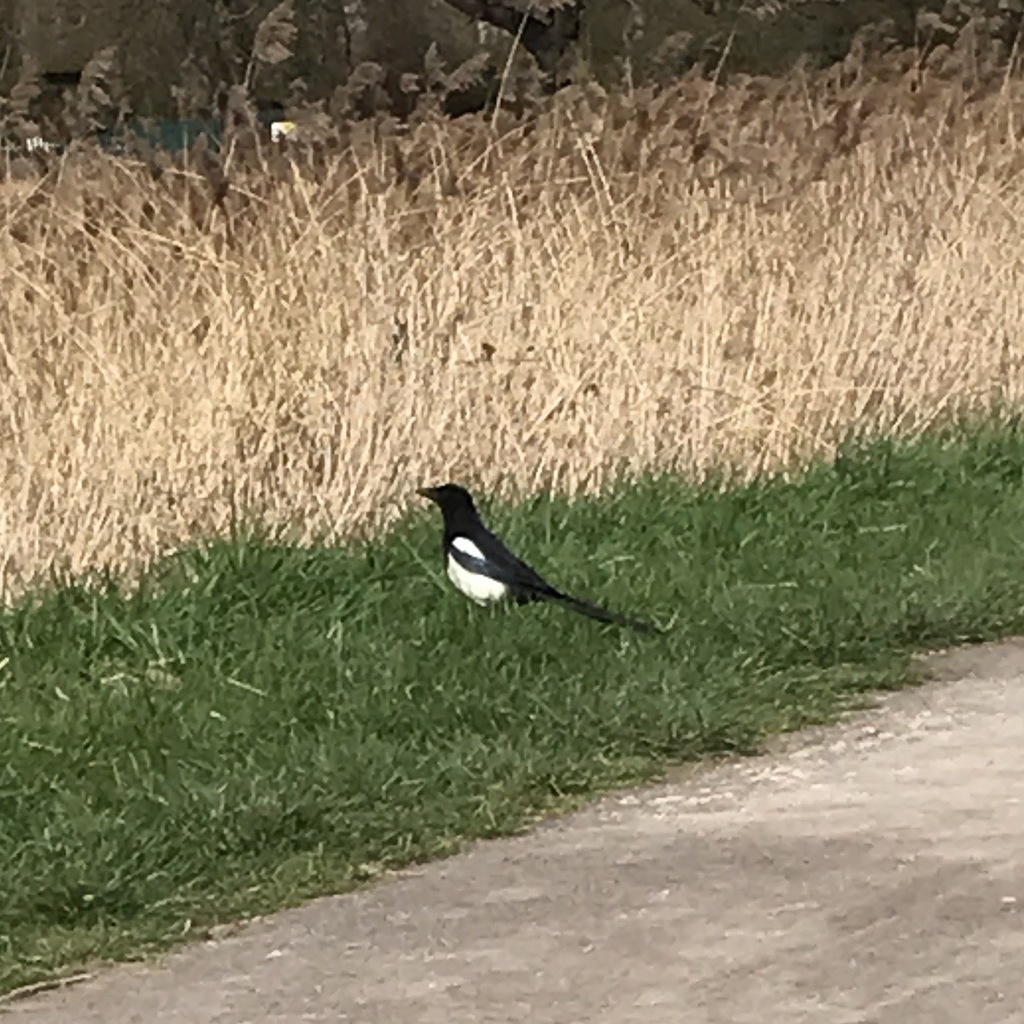 Anglers too like to see pairs or more, since it is a forecast of good, warm weather and suitable for a good days fishing to see them out together. "A single magpie in Spring, foul weather will bring" goes the saying. Sir Humphrey Davey, he of lamp fame, was a keen angler and suggests the reason for this belief arises from the fact that in cold and stormy weather, one magpie alone leaves the nest to find food, leaving its mate to remain sitting on the nest or caring for young ones.

Magpies always catch my eye. Their beautiful black and white plumage which, if you get close enough has a bluish sheen coupled with the green of their tail, is handsome and their swagger and daring give them a rakish air. In recent years they have flourished in urban environments, and have increased in numbers, up 112% in 30 years after receiving protection from the law.

Yet they still get a bad rap. Okay it's not unknown for them to raid nests, but they are not responsible for the decline in songbirds or game birds, as some would have you believe. Spoiler: it's humans and our insatiable destruction of habitats and food sources. In fact, they are mainly scavengers, nature's cleaners, and destroy pests.

Not all cultures vilify them. In Korea where it is the national bird, it's considered to be a bird of great good fortune and sturdy spirit and a provider of prosperity. Shamanism holds that the magpie is wise, has a gift of prophecy and brings good luck.

So here's to this clever, cheeky garden bird. The RSPB says of them, " It's their challenging, almost arrogant attitude, that has won them few friends. "But magpies are beautiful, striking birds."

Agreed and, as the song goes, Magpies "you've got a friend in me."

Yes, Liz, I rather like the magpie. It really does have subtly beautiful plumage. And personally I like its chatter too.

My mother was very superstitious about seeing just one magpie and she couldn't settle until she'd spotted a second (which I suppose might have been the first one somewhere else but no matter) and as a result I can't quite shake off the anxiety myself.

That first picture is lovely- looks rather like an Audubon or certainly "after Audubon".

Permalink Reply by Liz on March 31, 2017 at 10:20
It's from an 1811 book by George Graves called 'British Ornithology' via the British Library Flickr stream which released a huge number of out of copyright illustration from its collections a couple of years ago. I do like early 19c natural history books when the science was largely amateur and lots of people had a go at drawing and writing about nature. Tottenham's very own Priscilla Wakefield wrote botany and insect books for children which were "best sellers" although who did the illustrations is not known.