How could they get it so wrong? 4,000 votes excluded from Haringey election turnout figures 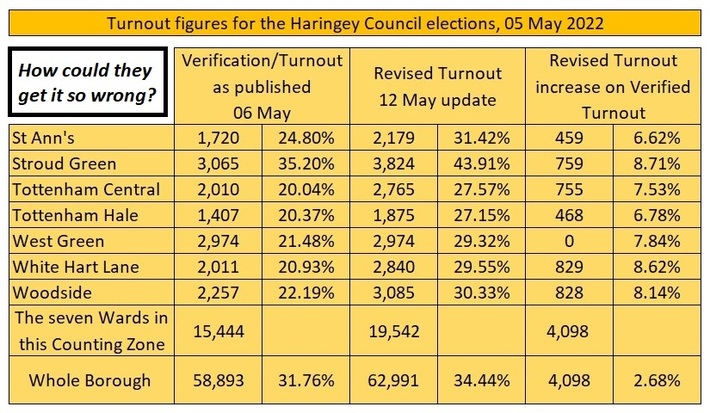 Six days after the count in Haringey’s borough council elections, 4,098 votes have been added to the turnout following representations by eagle eyed residents.
Such mistakes could never have taken place in a properly conducted election. Now people of goodwill are asking, what went wrong?
Did the Council’s Twitter account accidentally post mistaken data in good faith, and then later on, did computer operators accidentally post incorrect election results online?
Or were there errors made in the counting process itself?
Working in partnership with Councillors and Council officers, we hope to be able to address these questions more fully within the next few days.
But one thing is crystal clear.
Following the defective Love Lane estate demolition ballot, we now know that Haringey Council cannot run an election or ballot without getting it wrong.
Haringey Defend Council Housing is supporting resident demands for an independent enquiry into Haringey Council's demolition ballot at the Love Lane council estate opposite the Spurs ground. This ballot is the key to a huge gentrification and social cleansing scheme.
During the demolition ballot, Council officers collected ballot papers door to door, even though they had been told not to do so.
We will be bringing forward new evidence that the supposedly independent Ballot administration company Civica (formerly the Electoral Reform Society) gave strategic advice to the Council as to how best to get a YES vote in the resident ballot on demolition.
The future of Love Lane will be a key issue for the newly elected Councillors. The Council has been unable to get planning permission for the scheme, because it promised the land to two rival developers: Spurs and Lendlease.

Paul, as we both know, Haringey Council itself did not run the flawed, shaming Estate ballot on Love Lane Estate. Also referred to by the Council and developers with the utterly meaningless name of "High Road West". A planned renaming which wipes away the history of a real place. Substituting an empty non-name,  which could hardly be more  of an estate agents' or planners' invented Anytown Anywhere.

Though it appeared that Haringey Council staff were at least partly involved.  Paul, could you clarify this for HoL readers. And for new councillors who read this and may be confused by which staff did what.

I have no idea why the photographic and eye witness evidence was dismissed. It strongly indicated that this ballot was at minimum dubious and unreliable. That is putting things politely. A politeness which I confess to finding hard to keep to. Especially when remembering, for example. the photos of a fake ballot box. And of a pair of posters on railings; one stressing the reward for a 'yes' to homes demolition. 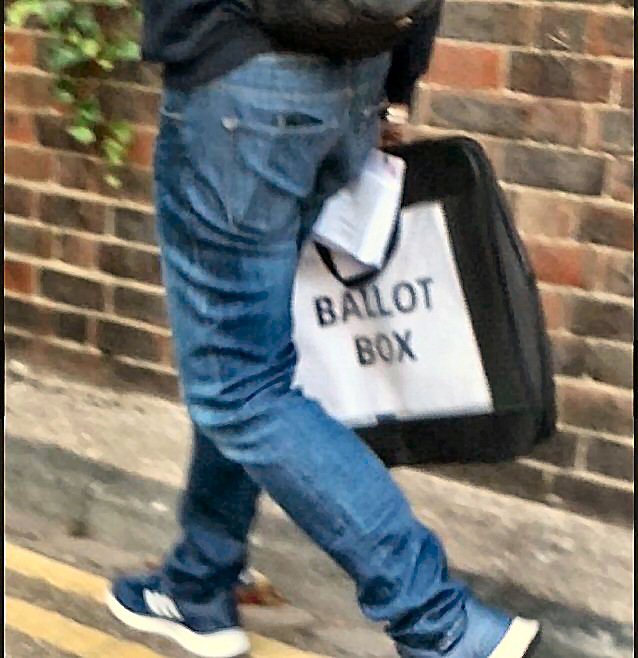 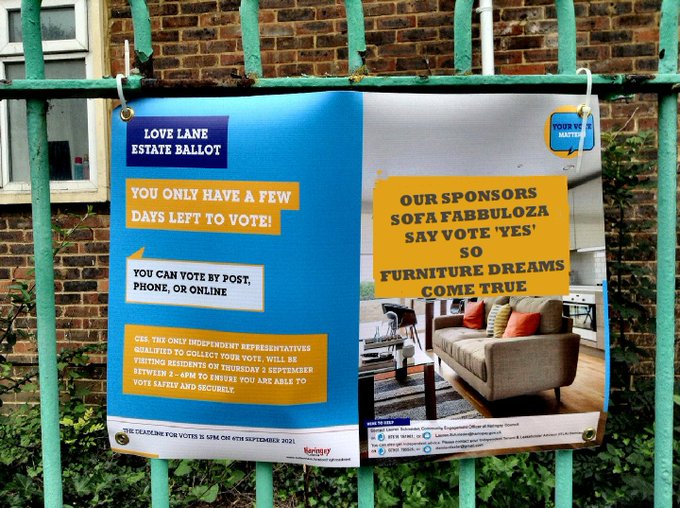 How much attention do you think Haringey gave to the written advice, comments and criticisms of Damian Tissier the Independent Advisor?

Alan, the second one is a spoof trying to encourage people to vote no.  Sofa Fabulosa is a made up name.

Thanks Michael for this observation. Of course I'll check this out and get back to you and others. Even as a spoof the aim appears unclear.

Of course I should have been more careful & checked before risking a silly error. Thanks Paul Burnham for the original double poster.

And for Michael Anderson, I hope more people can now see, the "Sofa Fabuloza" was a political parody aimed at pointing out what many people - including me - viewed as a significant measure of dishonesty at the  heart of the Council's "consultation" and resident voting.

How did this happen?

Makes you wonder whether they got the actual count right.