House Names on the Ladder 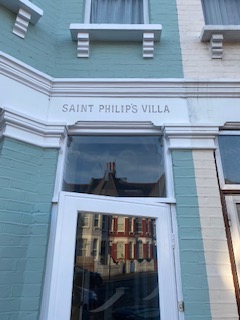 Had the front of our house repainted and painters discovered that it has a name carved into the lintel above the front door (Saint Philip's Villa) - did all houses have names or is this a one off? How can one find out more about the historic relevance of this name?

The same thing happened two doors up from us, three years ago.

The photo below shows the name just after it was uncovered. I'm glad to report that the builders cleaned it up and left it intact. The same question that you're asking also occurred to me. Why that particular name? A little research found the answer. Inadvertently, it also uncovered some of the history of our house and unmasked the previously mysterious first owner. I told the story here. The link to our house is revealed on the comments on page 2.

It wasn't unusual in Victorian times for whole terraces of houses as well as individual houses to be named. Most of the former quickly fell out of use after the end of century street numbering exercise. The latter stopped being used when the original owners moved on. In some cases, the new owners seem to have been so keen to erase all trace of the former owners, that they went to some lengths to cover up the house names. I'm not sure how many houses had names imprinted/carved in plasterwork. I'd have thought painting a name would have been more common, but perhaps the plasterwork option was more common than I'd realised. Three years ago, I hadn't heard of a single instance. Now there are at least two  - and I'm sure more waiting to be discovered.

Some research might uncover the story of the name on your house. Like Stoke House, it may be related to the builder or, if not then a former owner. A quick Google tells me that Philip was an apostle of Greek origin who was buried in a city now in Turkey. Whilst I imagine that the name is much more likely to have been carved early on in the story of the house, given the history of our area, I wonder if there's any geographic connection?

Thanks for this Hugh - very helpful - the previous owners of our house before we bought it in 1995 were Greek Cypriots - would that have something to do with it? Maybe, but that would mean it was carved sometime later possibly in in 2nd half of C20 rather than early C20

I checked the late 19th C street directory - no mention of the name there, but sadly its absence means little. By the time the mid Ladder houses were built, names were already being discontinued in the street directories. As I said, I suspect it’s more likely to have been earlier rather than later, but you never know!

Love these nuggets you uncover, Hugh.

Indeed! On the Hornsey Station estate map a lot of us got a few years ago through Hugh there are names on a lot of the houses. Ours had a name which looks like it’s under the plaster like the one here

Very faintly on the glass above the front door you could see Anscombe House, our house at the bottom of Seymour Road.

Back in the 50s/60s we lived in Frobisher and there was a plaque on our house saying 'Tashbrook' - my parents nicked it as a kennel club name for their dog breeding business!

The house where I was born (1948) was built in the 1890s. It was in Albany Road, near/ west of Harringay West station, and was in a terrace block of 9, It had the word "MONTROSE" carved into the lintel above the front door. Don't know if it was the name of the builder, or his origin town in Scotland, or what. Anyone local got any ideas?

Many late Victorian and Edwardian house names seem to have been drawn from a fairly narrow collection of grandiose bucolic sounding epithets. The 1892 Kelly's directory only lists three house names in Albany Road. They included Fernbank and Ingleside, both fairly common house names that fit the mould.

The third name belongs to a rarer group that might have had personal meaning. It is rather more intriguing. Lu-Shan was the name given to number 32.  Who knows what the origins of that might have been. The residents at the time were a couple in their mid-thirties "living on own means".

If I had to guess, I'd say that Montrose is more likely to have been in the first group. Let us know if you find out any more.

Thank you, Hugh, for your reply/ information. I will certainly let you know if any further info. Many thanks indeed..