Evaporating traffic? Time to Think again about a Low-Traffic Neighbourhood for Harringay?

With all the discussion about Wightman Road recently, I came across an article originally published on the London Living Streets website, by the campaign group's vice-chair, Emma Griffin. It sets out the case for low-traffic neighbourhoods, using evidence collected over many years.

Low-traffic neighbourhoods can be life-changing for the residents who live in them. Since the neighbourhood improvements in Walthamstow Village in 2015, people are walking and cycling more, children play out, air pollution has improved and life expectancy increased.

More information on what low-traffic neighbourhoods are and how they work is available here.

But bold traffic plans such as this are often introduced amid concern and opposition. This series of blogs explores these questions and presents research that helps fill missing gaps and tackles any misunderstandings.

Here we examine concerns that low-traffic neighbourhoods may divert traffic onto main roads leading to increased congestion and air pollution.

Experience reveals that predictions of traffic problems caused by low-traffic neighbourhoods almost always fail to materialise, and that significant reductions in overall traffic levels across an area can happen as a result of people making a wide range of behavioural responses to the new traffic configurations.

The most comprehensive study of the phenomenon of disappearing or “evaporating” traffic was carried out by Sally Cairns, Carmen Hass-Klau, and Phil Goodwin in 1998 and followed up in 2002. See below and here.

This brought together experience from 70 case studies of roadspace reallocation from general traffic, across 11 countries, with opinions from 200 transport professionals. It shows that traffic does not behave like water moving through pipes, finding an easier path as another narrows. Instead it is a force of human choice, driven by people making all sorts of different decisions when driving conditions change. The respondents in the Cairns study, for example, changed their mode of travel, chose alternative destinations, or the frequency of their journey, consolidated trips, took up car sharing or didn’t make the journey at all.

In half of the case studies, over 11% of the vehicles which were previously using the road or the area where roadspace for traffic was reduced, could not be found in the surrounding area afterwards.

What’s really encouraging, is that one of the most significant behaviour changes following implementation of low-traffic neighbourhoods has been a shift to more walking and cycling.

Just one year after the implementation of  schemes in Outer London, including Waltham Forest, residents were walking 32 minutes and cycling on average 9 minutes more per week. This ongoing London School of Hygiene & Tropical Medicine and University of Westminster study is available below and here.

As Rachel Aldred, reader at University of Westminster and one of the study’s authors says, “new infrastructure often takes some time to have an effect on active travel, but in this case we are seeing positive results after only one year”.

This demonstrates that if councils improve the conditions for walking and cycling (and make driving just a little more inconvenient), people take the bait very quickly. And as time goes on, as active travel becomes embedded in lifestyles, more will follow leading to long-term change over an entire area.

Low-traffic neighbourhoods are not, therefore, about rewarding one group of people while punishing another: they are part and parcel of shrewd city planning, making long-term decisions about how people travel.

And the potential for change is massive: currently around 1.6 million, or 22%, of all car trips made by London residents every day are under 2km and could therefore be walked (2.7 million more could be cycled). See below and here.

Any measures for converting these car journeys to active modes should be of paramount importance for London boroughs – not just to reduce traffic volumes but to improve the health of communities through activity and lower air pollution.

A 2018 study by King’s College London (more below and here) linked the boost in active travel in Waltham Forest’s low-traffic neighbourhood with increased life expectancy as a result of improved air quality, increased activity and shift to active travel on the school run.

This research also found that more than 51,000 households in Waltham Forest are no longer living in areas with dangerously high levels of air pollution compared to a decade ago.

So what about the main roads? Even with traffic evaporation, main roads will shoulder some extra traffic. But evidence suggests the impact of this isn’t as big as some fear.  Waltham Forest’s research shows that bus journey times (on main roads) have not significantly increased following introduction of LTNs.  That research is available here, chapter four.

King’s College London research, based on modelling work where traffic volume is used as one of the inputs to determine air quality, suggests that there has not been a decrease in air quality on main roads following introduction of LTNs. That report is here, page 8-9.

Main roads were also designed to take the majority of traffic, so can absorb increases in traffic better than their residential counterparts. These streets have wider carriageways, with buildings set further back. They also have better crossing facilities and safer junctions.

A small increase in traffic on a main road is also less noticeable than the transformation brought about by a dramatic reduction on a residential street: of a child riding a bike to school, of walking to the local shops, or hearing birdsong again. And given the majority of people in London live on residential streets, these sorts of improvements could be life-changing for millions.

For an illustration of how non-local traffic can degrade the environment and safety of residential roads, watch this video Stoke Newington, London. https://twitter.com/mum_on_bike/status/1138444799139356683

Counts on main roads in Waltham Forest also showed that traffic was more spread out across the day following introduction of the low-traffic neighbourhoods. In fact, maximum peak hour flows were lower on the main roads. In other words, the traffic Armageddon that some expected never arrived.

All that said, any increase in traffic is hard to accept if you live on a main road or send a child to school there. As a result, main roads also demand urgent attention.

One solution, being adopted in many cities across Europe and in Britain (for example in Glasgow), is to reconfigure main roads as urban “boulevards”. London also has the benefit of the Healthy Streets Approach to help deliver this sort of change. Urban boulevards could feature, for example:

These wider policies, plus redesigns of main roads and low-traffic residential schemes should all be addressed in unison, even if they are delivered over different timescales.

Doing nothing is no longer an option

The alternative — of proponents of different approaches falling into opposing camps – will only result in inaction, or watered-down schemes and lengthy delays. And there isn’t time for this.

London’s population is set to grow from around 8.6 million today to 10 million in 10 or so years. There simply isn’t space for all these people to fit in cars on roads. Climate change, air pollution and the health impacts of inactivity are also at crisis point, requiring immediate and drastic action. As the research listed here demonstrates, low-traffic neighbourhoods are one of the easiest, quickest and cheapest ways to take on this challenge.

Impact of LTNs on traffic volumes and active travel

This would be a wonderful thing for Harringay, I have long been an advocate of measures like this. I walk everywhere but am affected by pollution, would be so much nicer without traffic. Let’s have wider pavements, larger bus/cycle lanes and no parking on Green Lanes. How much nicer to sit outside a local restaurant without loads of pollution!

Have a look here if you want to see Council Capture by Traders... ...apparently the Council wants to " create a cleaner, greener and safer experience for all users of Turnpike Lane" - how many street trees are there currently on the entire stretch of Turnpike Lane? How many are they proposing to plant? How many cycle Lanes are there? How many are they proposing to implement? It's principally focussed on the traders, advertising, customers' cars and parking spaces... 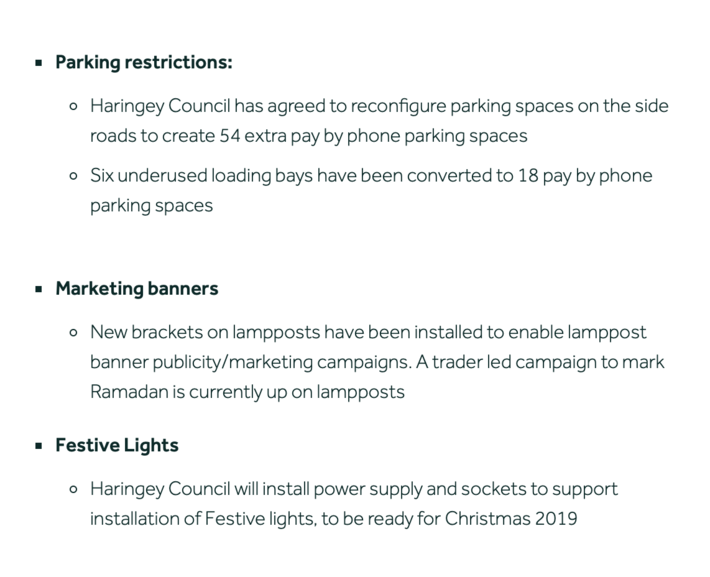 I think they should install/reinstall a tram that runs from Manor House to Turnpike lane.

The Orford road example, whilst looking nice ..is part if the Mini Holland scheme in Waltham Forest and has been a source of huge local tension and upset in the borough. Socialy divisive AND just a disaster. ..even the london ambulance service have complained about ...but as long as people in The Village are happy .

Actually Fiona, there was an FOI request to the emergency services which confirmed there was no significant impact on vehicle response times. Orford Road used to be a traffic-clogged disaster but now 51000 households are benefiting from cleaner air, what's not to like?

Can you explain what you mean by “socially divisive”?

Actually the only divisiveness has been the antis against the cllr Loake and others who proposed and instigated the scheme .

It has been a huge success.

Up the road in Enfield they have also had huge resistance for the cycle lanes on the top part of green lanes, but they successfully defeated a hugely negative campaign and they have been in for just over s year.

I have been persuaded to cycle to work, enfield to euston via Green lanes manor house finsbury park and Camden.

The section to the north circ is fine, then you enter the wild west in Haringey.

Green lanes is a nightmare you, could easily get a cycle lane down there, or you do something with Wightman, i refuse to cycle on Wightman as it looks too dangerous.

The myth that the traders need all this vast amount of parking is exactly that, a myth.

Experience in Enfield was that it was the shop owners own cars that they wanted parking for in most cases.

Yes that would be interesting but remember cyclist like to shop too, dont just want to be hidden away.

The enfield green lanes scheme was all about cyclist wanting to go down main roads to down centres in the most direct way. The anti, Save our green lanes campaign, came up with some terrible counter plan that sent the bike lanes down the new river and meandered slowly through back streets, which would be lovely for a quiet way but not for anyone actually wanting to go someplace useful!

You might be able to repurpose the New River Path but at the moment that prohibits cycling.

Unfortunately, the curvature of the flyover line between Hornsey and Harringay extends up to the railway boundary, I think, and the bridge over the Goblin is a pinch point.

But it is this sort of radical thinking that at least starts the conversation (everything gets watered down so why not open the bidding at a billion quid?). And Harringay station could do with a new bridge anyway... maybe Great Northern could spend some of that 15m quid on it. Probably be quicker to ride between FP and Ally Pally than get the train.....

The tension was from inconvenienced drivers who got very agitated while the reaction, largely, from the local community was incredibly positive. I would love something like Miniholland introduced in Wightman. I say it a lot. Our health: mental health and physical health comes second to the drivers passing through the borough. It’s unfair and absurd. Our life expectancy is curtailed to provide the convenience of drivers who don’t even live in Haringey and it has to stop. Also, we have something called a climate emergency, and this should also be addressed. It’s quite urgent, I understand.

The traders on green lanes would never allow it.

what would they do with their big mercs and range rovers?