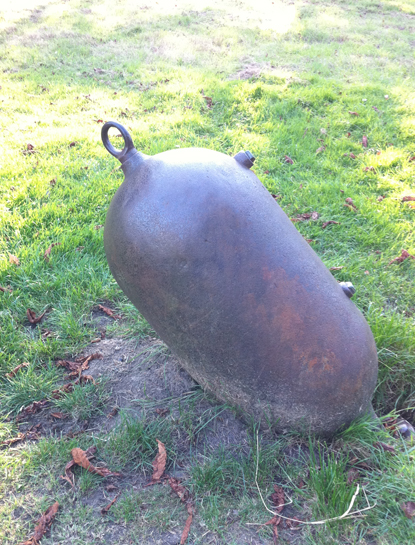 The Foundation is dedicated to every aspect of kites http://www.drachen.org. A website devoted to Cody is here www.sfcody.org.uk

Another photo of the banqueting hall - can't find anything much about it from googling: I don't know how big the German influence was, but many of them were interned at the Palace during both wars...

I first flew a kite as a five-year old in Finsbury Park in 1928, under the guidance of my father (the kite-maker!).  He built Malay kites from brown paper and split cane, and I learned the basic skills on a 2 ft version, with a 4 ft tail.  By the time I was 10, I could handle a 6 ft Malay kite.   I recall that a kite-flying club, consisting predominantly of male adults, used to meet regularly in the Park, flying very large box kites, some controlled by small winches staked into the ground.  I also seem to remember that some of the very large kites had small lights attached, which made a brave show as dusk fell on the Park.

Permalink Reply by Hugh on October 5, 2011 at 10:52
Thanks for that Arthur. According to this Wikipedia article the Malay kite is also capable of lifting a man. Is this the sort you used?

Precisely!  The photo in the Wikipedia article is exactly the type my father used to build, and which I in turn produced, firstly to entertain my children, and then my grand-children.  Hours of good clean fun, no smoke, smell or vibration, eco-friendly .... and all that rhubarb!

My father attached a tail to my first Malay simply to get an extra bit of stability for a learner.  Thereafter the tail was omitted.   One Malay kite could not 'lift a man' and, as the Wiki article states, nine were needed, linked linearly.  I remember seeing three or four Malays flying that way in Finsbury Park in the late 1920s. I seem to recall, however, that Benjamin Franklin (in the USA), built a very large box kite which, flown solo, was man-carrying.

Jean Roberts, noted Cody expert and owner of www.sfcody.org.uk has passed this to another Cody expert - Paul Chapman, who emailed to say he too thinks it's maybe a WWII object - these people should know so I guess it's not old. Paul also mentioned a Mr Barton who built and flew his airship from the site (1905).

Before this I spent an enjoyable time googling, so thought I'd post here anyway. Even though it's nothing to do with the object, it does relate to the Park.

I was able to find out something about three characters, all of whom had a strong connection to Alexandra Palace, SF Cody, A E Gaudron and Dolly Shepherd:

Here's a photo I found on Jean's website that shows the need for a tether (behind the wagon) although this photo could be anywhere, it might very well be the park: 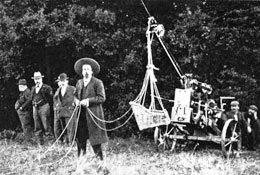 It may show how Elizabeth (Dolly) Shepherd was hoisted aloft. Her book, co-authored by her daughter Molly Sedgwick (herself no mean parachutist) and Peter Hearn, was published in 1984 (a year after Dolly died).

Her book relates how, at 16, she got a one-night job as a waitress at Alexandra Palace so as hear a Souza concert. She also saw Colonel Samuel Franklin Cody's show. During his trick of shooting a plaster egg off his wife's head on stage, the bullet grazed Mrs Cody's cheek so she quit on the spot. Dolly offered to replace Cody's wife in the act and 'Mrs Cody' returned to America.

Jean Roberts points out that, as well as Cody, the aeronaut and ballon-maker Auguste Gaudron conducted a number of "Aeronautical Displays" at the Palace involving captive balloon ascents, parachute descents etc. It was probably in his workshop that she got the half-hour training needed to join Gaudron's parachute team and picked her stage name - Dolly.

In 1904 at age 17, in knickerbockers, she would have seen damp grass or straw was dumped in a fiercely burning firepit. The resulting smoke was driven into the cotton-muslin balloon often suspended above on two poles, the balloon could well have been anchored by the object at the top of this thread that prompted me to write this.

With Dolly already attached to her 'chute, hanging on to a trapeze bar, the balloon rose to 5,000ft. Thus she became the first female parachutist. Carlotta Myers and Nellie Thurston were some of the other well-known women on other 'teams'. Showmen would often attempt recruitment by pick pretty girls out of the audience. Demonstrating bravery and quick-thinking, those that took up the challenge reportedly managed higher safety and professionalism standards than the men. You can just see the parachute in the forground of this photo, taken in Wolverhampton in 1910:

It was dangerous and many people died during these early years. Dolly was due to jump in Coventry on 9 July 1910, but another member of the same Gaudron team, pioneer balloonist and aviatrix Edith Maud Cook, took her place at the last minute, only to be dragged off the roof by her 'chute by the wind and killed. All of them pioneering aviation.

By 1908, when Dolly was 21, it was usual to send two girls up together. She effected the first ever rescue of a parachutist (a girl called Louie) whose parachute failed to release at 11,000ft. Dolly got the girl out of her harness, told her to wrap her arms and legs around her own body and thus they became the first ever tandem parachutists. 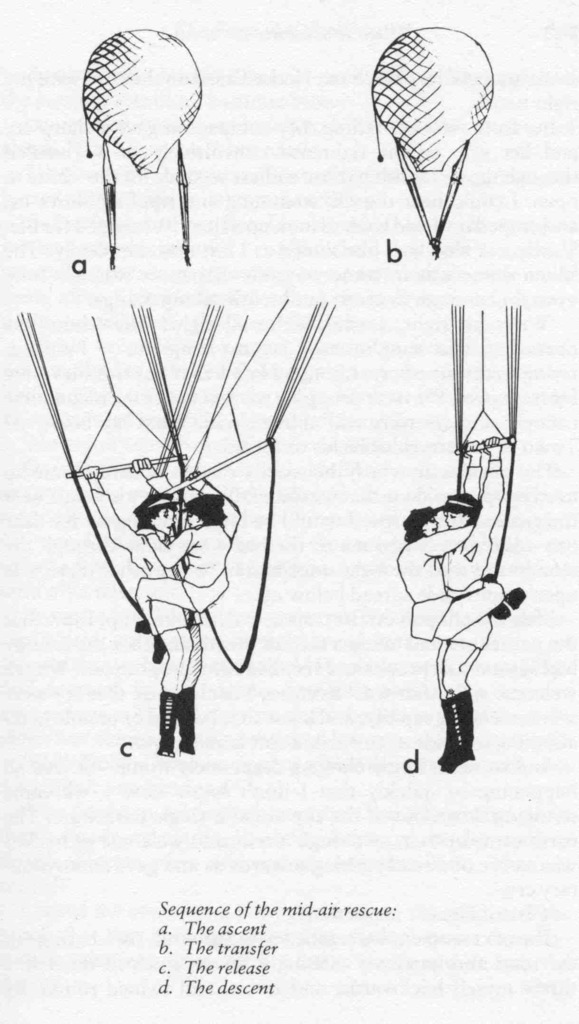 Dolly severely damaged herself when she hit the ground, taking the fall for Louie, who escaped unharmed.  She was given electric shock treatment for her injuries - totally unorthodox, but it worked.

At one point she found herself hanging on for dear life to a runaway balloon, which nearly took her high enough to pass the point of consciousness or freeze to death. She survived that too, coming down three hours later because the balloon had leaked.

She had toured the country with the balloon and was well known, with songs written about her. Here she is at around age 24:

When she was 26, on a very calm day (in 1912), her daughter Molly tells how Dolly heard a voice when she was high saying 'Don't come up again or you'll be killed', so gave it all up because 'the feeling was broken'. Her mother took her place for several weeks during her paralysis.

She was a driver mechanic in France during WWI, married a Captain Percy Sedgwick and was a shelter staff officer during WWII.

Family disapproval of her stage career saw her end up working in her aunt's Holborn feather shop. Her last flight was with the Red Devils at the age of 90. She died in 1983 aged 97. Her funeral was attended by members of the Red Devils and parachute team RAF Falcons.

'When the 'Chute went up -the adventures of an Edwardian Lady parac... (local library link) or on Amazon. Let us know if you read it - here's a reprinted copy:

There's supposed to be a mural of Dolly in her flying suit on the walls of Alexandra Palace - anyone seen it?

Professor/Captain Auguste Eugene Gaudron set a few records himself  too, crossing the channel to England in a balloon. Buried in Highgate Cemetery, he had a workshop - 'Alexandra Park Aviation Works' at 77 Duke's Avenue, Muswell Hill.

In 1901 he proposed an "aerial torpedo boat" 100 feet long (a snip @ $10,000. He designed it to carry five passengers at 30 miles an hour. It would be driven by petroleum motors, with propellers, and the lifting power was hydrogen gas. 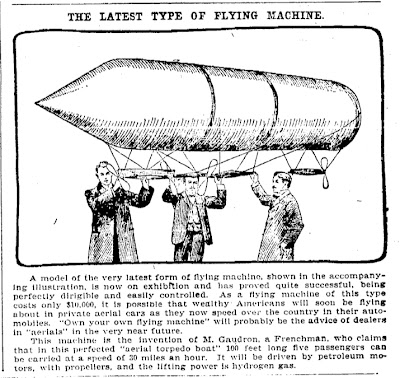 By 1905, he tried to sell a design, capable, he stated, of flying 200 people via four propellers at 60mph to another pioneer - Patrick Young Alexander. With a team of Frenchman, he had built the 'North London Flying House' in Alexandra park: 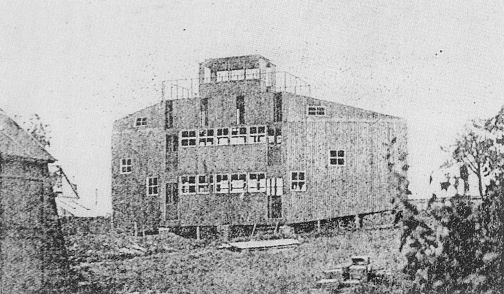 On 18 November 1908, together with 'Daily Graphic' reporter C. C. Turner and Essex Regiment army officer Captain Edward M. Maitland, he flew the' Mammoth' balloon from Crystal Palace to Meeki Derevi in Russia - a distance of 1,117 miles in 36.5 hours. As this American newspaper described in detail - it was 'the greatest balloon voyage ever made'.

Here he is on the left, getting ready to take off: 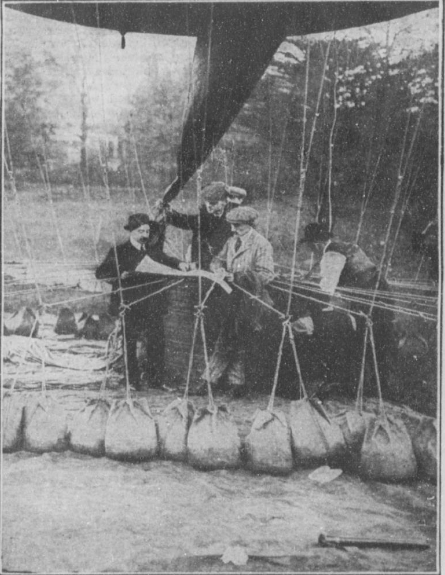 Jean Roberts, maintains an interesting site about him at  www.sfcody.org.uk. Cody and his kites were in the Palace by 1903 and Jean Roberts has kindly consented to publication of these photos from amongst her collection of Cody materials: 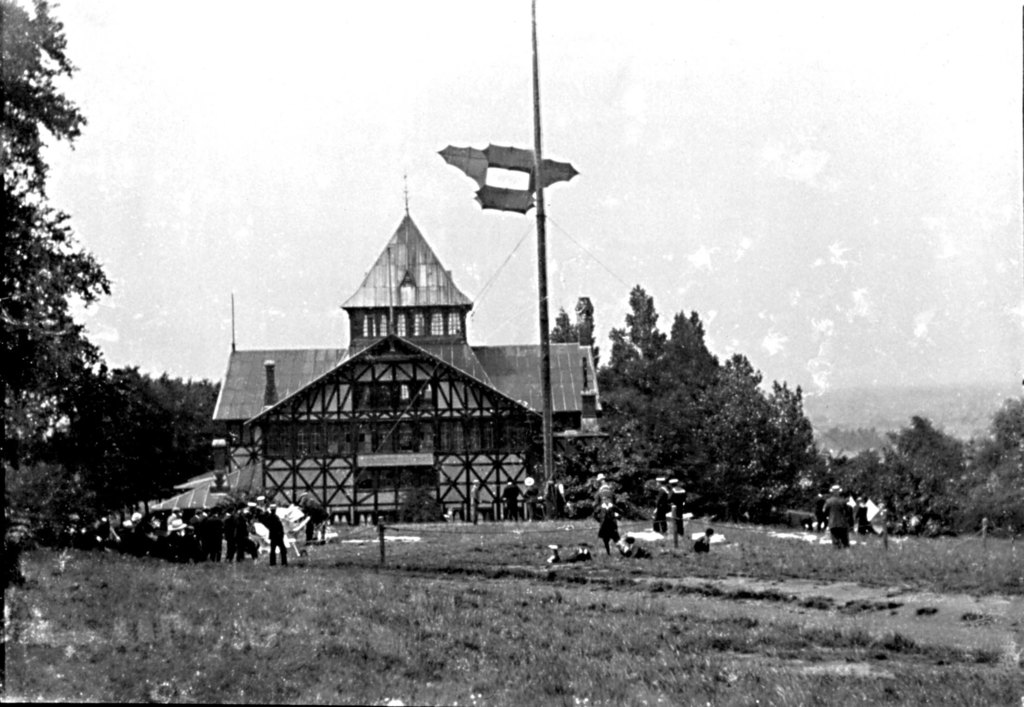 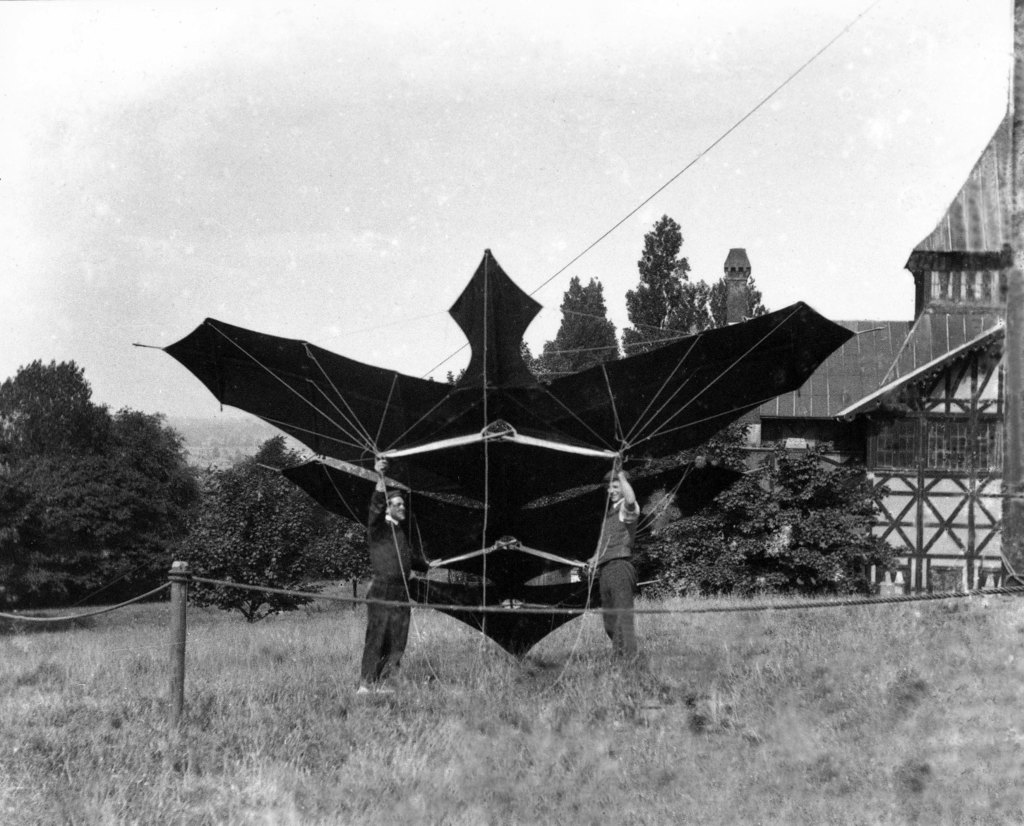 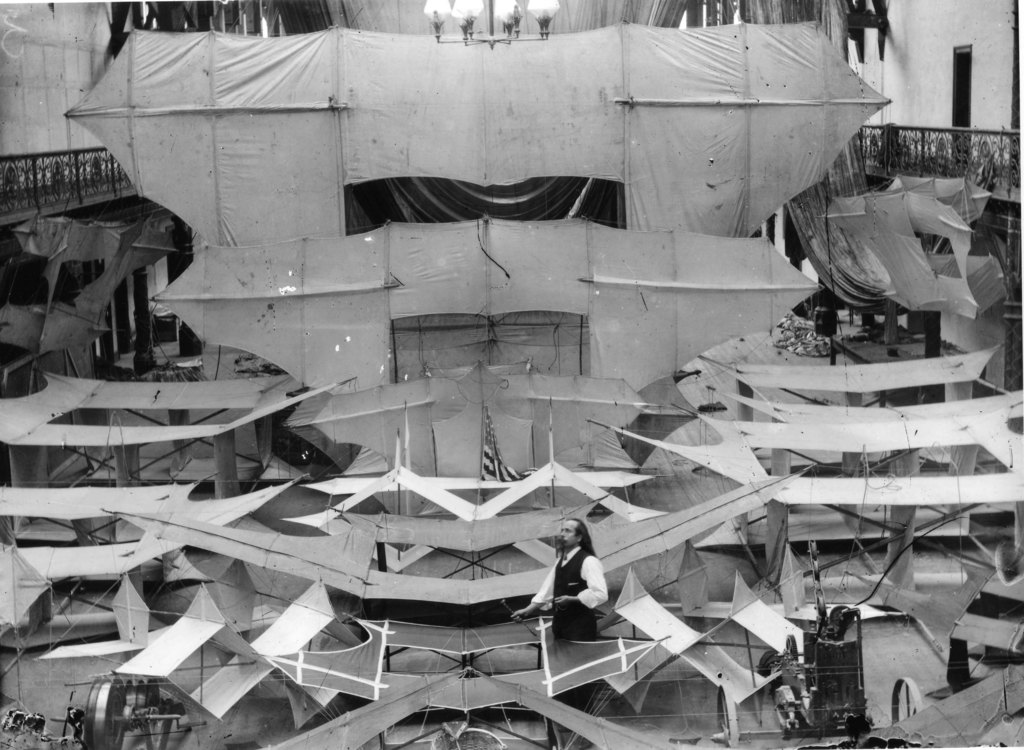 Thanks for all the work you put into this this Chris - fascinating stuff. I'm not sure how, but I completely missed it at the time you posted, as I imagine may many others.

On the point of the anchor, did your first paragraph meat that Chapman's the conclusion is the the bomb like structure is a WWII object?

Hi Hugh - nobody knows what it is for sure - it's almost certainly nothing to do with Cody though.

Pity - on one score, but on the other hand, I'm also glad it's still a mystery to be solved and that it catalysed the telling of a great story for which I thank it - and you.

I hope you'll consider it a tiny bit of payback for all the hard work you and Liz put in - thanks for enabling, Hugh.