Another little piece of Harringay's history on sale

Every now and then small (and some not so small) mementos of Harringay's history pop up for sale on online auction sites.

Ten years ago, there was the wonderful story of the Harringay map which a group of Harringay Onliners ended up clubbing together to buy. Then there was the match case of the Queen''s Head landlord, which Lesley Ramm bought.

Recently, I posted about the sale of a clock from Griffin of Harringay and a quarter of a million pound Lotus sports car. Sadly, no one local stumped up for either, as far as I'm aware;

This week, I noticed a wee memento from the Edwardian era from a shop on Green Lanes at the corner of Endymion Road. It's on sale on ebay for £75.1 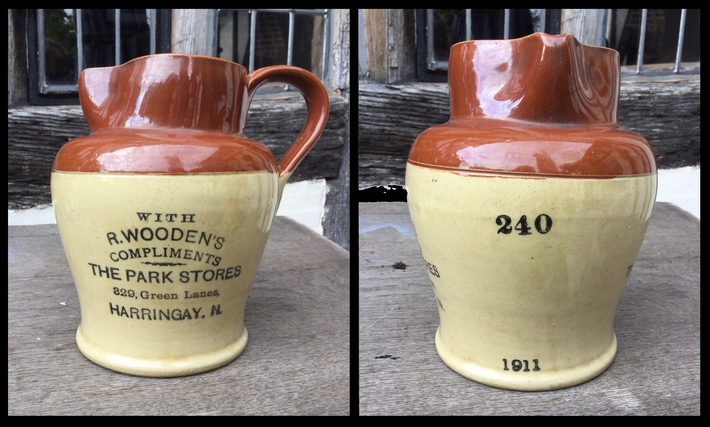 Starting its life as 1 Sybil Terrace,2 329 Green Lanes spent its first twenty years as a grocer's, changing hands four or five times over the two decades. Then in 1911, it became a wine and spirit merchant under the ownership of Richard Wooden. I assume that the earthenware jug shown above was a produced as a marketing tool at around the time Wooden took on the shop.

The premises remained as a wine a spirit merchant until at least 1984. Then in 1986, it became M.G. Furniture. Finally, in 2005, it was set up as Parkview Estates, who are the current occupants.

The full shop hitsory of 329 Green Lanes is given below.

The shop seems to have evaded inclusion in all HoL's photos, with the exception of the one below, where it just manages to sneak into the background on the far left. 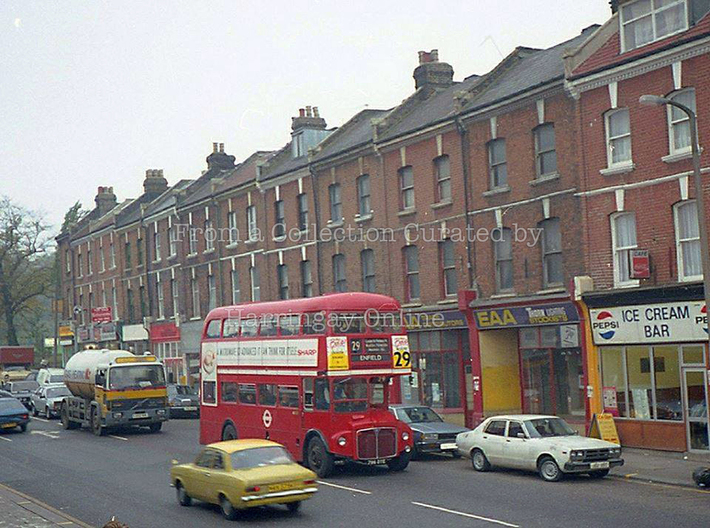 You can also see the shop in the excerpt in a Britain from the Air Photo of 1947. Let us know if you buy the item!

1. Because I'd viewed the item, I was contacted by the seller and  was offered a reduced price of £68. Out of interest to see the response, I countered with £25 and received a second offer of £60. I'm not looking to buy the item, but if someone else is interested, I suspect that a realistic offer below £60 might be accepted.

2. The roads to the south of the Tottenham & Hampstead railway were built up as the Finsbury Park Estate in the late 1870s. All of the roads were given names of novels by Disraeli. Following this pattern, the terrace from Endymion Road to Lothair Road was named Sybil Terrace. I can find no surviving physical evidence of the name on the building, but the mews running behind the shops is still called Sybil Mews and the and still appears on present-day maps. 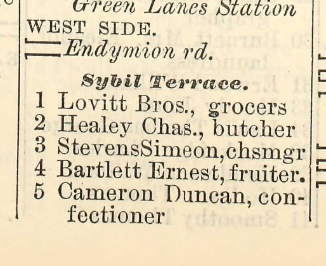 I remember Mr Brodie. I used to run around the corner from our house in Lothair Road North for sweets in the ad breaks of television programmes! Therefore I was always in a raging hurry, which he found hilarious. It sounds like he was Brodie Junior? Did his father have the off-licence before him?

He joined one brother and twin sisters.

Raymond married Betty in 1956 in which year he took on the shop. He and his wife continued to live above the shop with Harry and Florence.

It's nice that you remember them. Can you recall anything about the shop?

Thanks to Peter Brooks for reminding me of the Britain from the Air Photo that included the shop. Now added above.

Many times in the late 40’s and early 50s I was sent/asked to pop down to Brodie’s, to take back the empties, get some crisps or cigarettes.
At Christmas, as a special treat, we’d buy a whole tin of Smith’s crisps – with the little blue waxed paper twist of salt. There was a hefty deposit on the tin, three shillings I think.

The tins were marked "Property of Smiths, etc". and were well printed advertising and really intended for shop display. The retailer would have been required to return them to the wholesaler.

There are several on that well-known online auction site starting at £35.

Biscuit tins of the same dimension were often very useful storage boxes. My dad’s shed had many full of plumbing and electrical handy goodies. A side could be cut out making a perfect wind-shield for your paraffin Primus stove (I have one somewhere) when camping.

Two of my aunt's worked for Smith's Crisps factory in Plymouth, their job included working on the friers or putting one little blue twisty packet of salt in each bag of crisps by hand, on boring days they would put several in a bag  at a time and none in the next few just to break the monotony: and that is why you may have been the lucky one to get extra blue twists of salt.

Now we know the secret. We belived that if you got two twists of salt you would marry your girl friend!

Phyllis and Eileen would love to have known that they spread a little love!