A Short History of The Printers Almshouses Wood Green

The history of almshouses stretches back to medieval times when religious orders cared for the poor.  They were originally called hospitals or bede houses, in the sense of hospitality and shelter.

By the middle of 1500s, there were about 800 medieval hospitals spread across the country but the dissolution of the monasteries meant that many  were either sold off to landowners or left to ruin.  During the late sixteenth century craft guilds founded their own 'hospitals' to provide care for the “elderly decayed” members in their declining years.

In Georgian and Victorian times, almshouses became more urban in character.  During the Victorian era housing became a huge social problem as people migrated to towns looking for work. In response trade associations established financial provision (pensions) and accommodation for their retired members. Tottenham and Wood Green were popular locations for almshouses due to is rural location close to London.

Established by the Printers' Pension Society, one of the almshouses set up in Wood Green was the Printers Almhouse.

At its founding the Society aimed to 'grant Pensions in the decline of life to such infirm and afflicted Journeyman Printers and their Widows as may be thought most deserving'. The process to be selected as the 'most deserving' was, apparently, not for the faint-hearted!

Probably shortly after its founding thoughts turned to supporting retired printers. By 1847 the Society had decided to purchase a plot of land in Wood Green, adjoining that of the existing Fishmonger’s and Poulterers Almshouses (foundation stone laid 1847). According to the Builder (19 June 1847) the goal was “to erect thereon six almshouses, containing two rooms each, to accommodate twelve persons and their wives, with library &c.”

The land was the area currently occupied by the rather ugly BT building located just south of the junction of the High Road with Bound Green Road. It ran south to the corner with Watsons Road. On the opposite corner stood the Three Jolly Butchers, an old coaching and drovers’ inn dating from 1781.

Architect William Webbe* was employed to design the homes and in June 1849 the foundation stone was laid, almost exactly two years after the decision to buy the land. The Almshouses were formally opened in June 1856.

Although each home sounds as though it was quite small, both the architecture and the setting were delightful. The Morning Chronicle of 13 June 1856 carried a report on the opening ceremonies which included the following:

“From the well-elevated situation, they (the almshouses) command, in all directions, a beautiful and uninterrupted view of the country for miles around.” 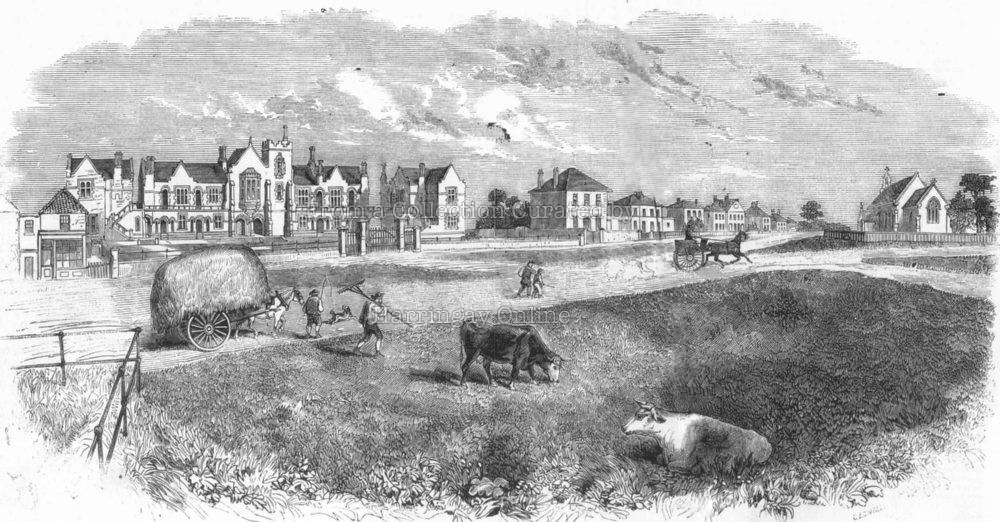 Printers Almshouses 1858
(All the houses to the right of the almshouses on this picture still stand today, except for the closest one)

The original almshouses were built of red brick with bath stone dressing and were 180 feet long. As planned, they included homes for just 12 pensioners, six on the ground floor and 6 on the first. At first floor level, a balconied walkway ran around the outside of the building with stairs to the ground floor, giving access to the upper apartments.  In the centre of the terrace was a tower with a niche which held a statue of William Caxton.

In October 1867, the council of the Printers Pension Corporation established a fund to build new wings to increase the almhouses' capacity. The foundation stones were laid in November 1870 and the new wings opened in August 1871. The southern wing added further eight homes for married couples whilst the smaller northern extension added homes for four widows. There were now a total of twenty four houses.

In 1891 two new houses, apparently called “the Albany Extension (after the Duchess of Albany who formally opened them in October 1891) were added to the northern side, completing a uniform set of buildings arranged around a courtyard. A formal arched entrance gate was also built. The changed footprint of the building from its first incarnation to its last can been seen on two Ordnance Survey maps. 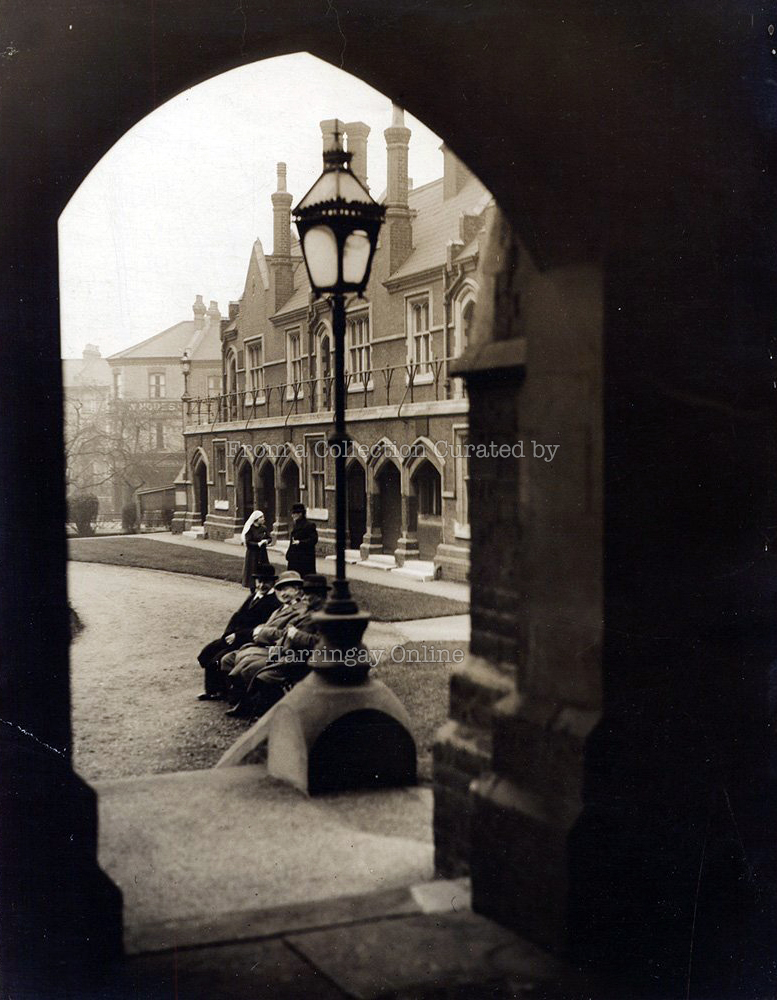 Looking out of the courtyard south east across to 240 Wood Green High Road (which looks like it was W Nodes Funeral Directors at the point this image was taken), c1950 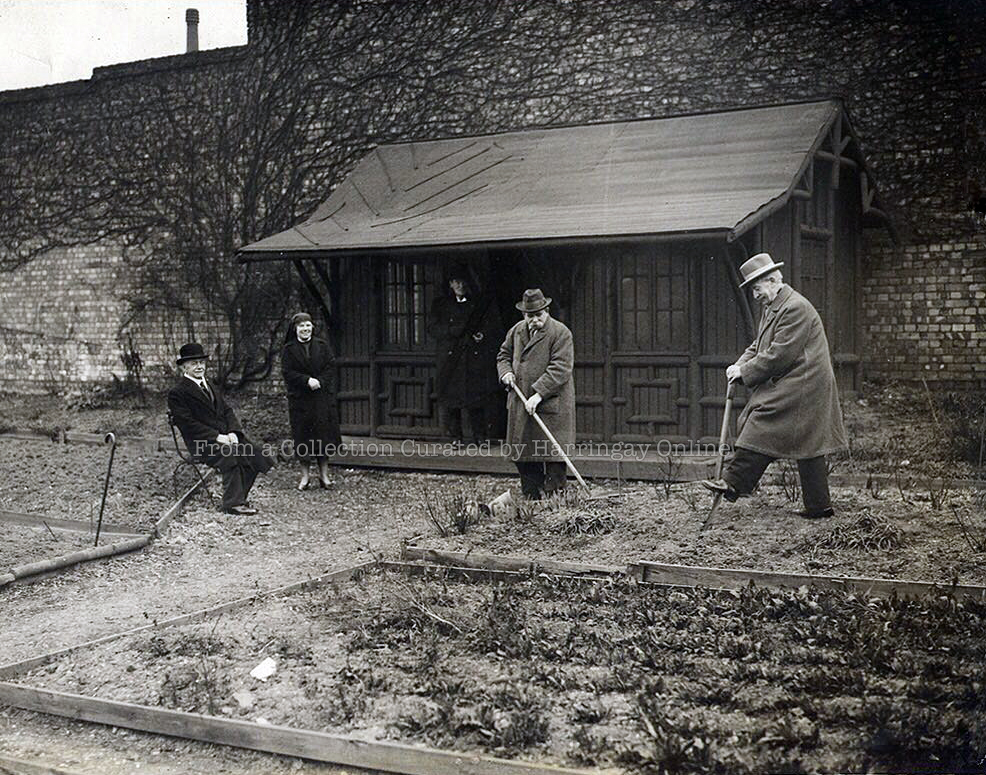 In 1948 the homes were passed to The Lord Southwood Homes of Rest. Lord Southwood was the owner of Odhams Press. In 1969 the alsmhouses moved to Southwood Court in Basildon and soon after the site was redeveloped by the GPO (now BT).

*Although little is known what became of Webbe, another, more humble, example of his almshouse design work still stands today on Nunhead Green in South London. Designed as the Beer and Wine Homes, it opened in 1853.  Just one year later, in June 1854, Webbe was recorded as declaring himself bankrupt.

An interesting wee snippet that didn't quite fit into the main narrative was published in the Bath Chronicle and Weekly Gazette on 6the November 1862:

One of the heroes of the Nile died on Tuesday last, at the Printers' Almshouses, Wood Green, Tottenham, Mr. Robert Hall, at the ripe ape of 84. The deceased was engaged in the first great naval victory, obtained by Lord Nelson of the Nile, on the 1st of August 1798, which victory he survived.

After quitting the naval service he resumed his original occupation of compositor, in the employ of Mr. Clay, of Breadstreet-hill, and continued with that gentleman upwards of 30 years, when, in 1854, he was elected annuitant the funds of the Printers' Pension Society. Subsequently, in 1857, was elected inmate the ' Printers' Almshouses, where he continued till his death.

He is kindly remembered by his former employer and other friends, with tolerably good health, till a few weeks prior to his decease. Leaves an aged widow, who will remain an inmate of the printers' haven of rest.

A big thank you for this article and the photographs some of which I have never seen before. I remember as a boy walking up and down the stairs and along the balcony.

I've just added a photo of the huge fireplace which I assume stood in the main hall.

Another new photo added, showing the site of the Almhouses just before the construction of the current building.

I remember that there were also Arms Houses where Civic Centre was built. Anyone know anything about them?

Yes thats right, the Fishmongers and Poulterers Almshouses. Demolished around 1956 for the Civic Centre. The Civic Centre is closed for refurb at present and has a hoarding with several interesting historic photos- well worth a look!