When I was a boy, Maynard’s was a ubiquitous presence in the North London scene, with confectioner’s shops in every high street, graced with their distinctive-scripted Art Deco “Maynard’s” fascias.

The company was incorporated in 1896 and in 1906 the expanding concern moved a mile or so to the Harringay site in the picture.

Also around the turn of the century, Charles Gordon, heir to the candy firm, suggested to his father that they diversify into making “wine gums”, an idea that outraged Charles senior, a strictly teetotal Methodist!

Nevertheless, Charles Riley gradually came round to the idea when his son persuaded him that the projected new sweets would contain no actual alcohol.

A classic was born!

The manufacture of Maynard’s Wine Gums commenced in 1909. The new factory site below an embankment of The New River, permitted clean Hertfordshire spring water to be used in production whilst the proximity of The Lea Navigation and numerous railways afforded coal and sugar to be cheaply shipped from the South and gelatin from the North. London itself provided a ready market of some ten million people, and the World’s largest commercial port was within five miles.

The works grew consistently, irrespective of trade depression or war, to become a four-figure employer of local labor.

In 1990, Maynard’s combined with the Tottenham licorice mill Barrett’s plus effervescent candy firm Trebor. Later in the same decade this combine merged with the Anglo-American soda pop and confectionery conglomerate Coca-Cola Corporation as part of its Cadbury chocolate and candy arm. Retail assets were divested.

In 1998, the London factory closed and Maynard’s Wine Gum and associated sweet manufacture was continued at a Sheffield premises that had come on-stream in 1991. By 2002 worldwide sales of Maynard’s Wine Gums alone had reached a value of forty million pounds sterling per annum.

The Harringay premises is now a warehouse for The Oriental Carpet Company and its associated Turkish concerns.

Permalink Reply by Alison Smith on November 10, 2007 at 11:11
The Barrett's name was well know amongst North Londoners - especially where I & my family grew up in N7. My Dad as a lad in the 1930's was ofen left with free time on his & friends hands. This combined with the general poor level of slum housing & echo's of the edwardian workhouses became very enterprising young men.
They were once sometime circa 1940 a small group who were freely liberating (stealing) some sweets from the Barrett's factory off York Road (now called York Way) when spied by a policeman. The ensuing chase had them jumping from factory roof to factory roof trying to evade the police & ultimately the wrath of parents finding out. All was going well, until my Dad accidentally fell through a glass skylight on onto an engineers workbench some 20 / 30 feet below.
There was not time to chat, escape, or enjoy the ill gotten gains. There was only the reality of the policeman taking him home for a good reprimanding from his own father who was not the kindest of men. I believe that he did manage to get some of the sweets from a friend at school sometime later on.
The Barrett's factory chimmney & derelict factory was still visible when as a teenager I travelled regularly on the North London line to get to school at Parliament Hill in the 1980's. I unfortunately haven't travelled that way recently & fear that this part of history may well have made way for the new Channel Tunnel Rail link opening next week at St Pancras.
My Dad has many memories of Harringay Arena & Stadium especially the 1950's & 1960's. I will try & glean some more info & post it for those interested.

Did you see the old press cuttings on this site? I was amazed by how many riots there seem to have been at the Stadium. And there was me thinking things were more orderly in the early 20th century.

There was a Barratts factory between where the Wood Green Shopping City and the Great Northern Line. The old office buidling survives today. If you look at the old photos on thsi site you'll see an 1860s view south from where Ally Pally was built. The Barratts' factory chimney shows on that.

Permalink Reply by Alison Smith on November 12, 2007 at 11:53
Hugh,
Civillisation is often not civillised at all - I thought you knew this!!

Look up Sidney Street siege in 1911 for a fascinating insight into how crime doesn't pay, how immigration / intergration hasn't changed in 100 years or more. & how something that started as an "outrage in Tottenham" went on to shape personal (mine) , local, national, & international events for the next 30 / 40 years! Also shows that you should never take politicians too seriously sometimes!

Permalink Reply by StephenBln on February 5, 2008 at 17:23
There was also a Barretts sweet factory on Station Road in Wood Green. My grandmother joined her elder sisters and started working there during the First World War. There seems to have been quite a fluctation of workers between Barretts and Maynards, because all my Great Aunts & Grandmother ended up working at Maynards. (We used to get reductions on bags of Wine Gums not considered to be up to standard).
I can remember waiting at the Maynard's factory gates in the early 1960s and can distinctly remember the factory hooter sounding at 17:00 and the rush of workers hurrying to clock-out. It always amused me and somehow was reminiscent of some of the scenes in Fritz Lang's Metropolis.

Here are some pics I took of the factory today. The bottom picture is taken at the bottom of the huge chimney: 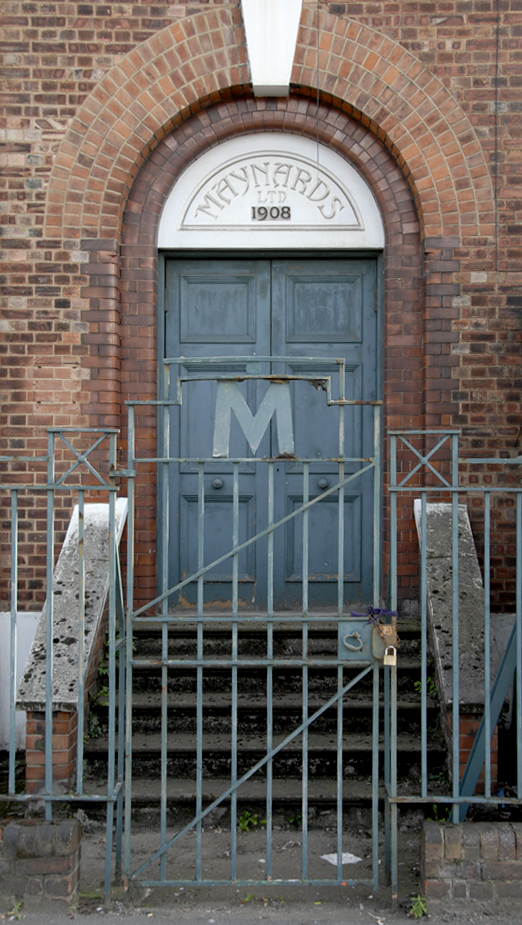