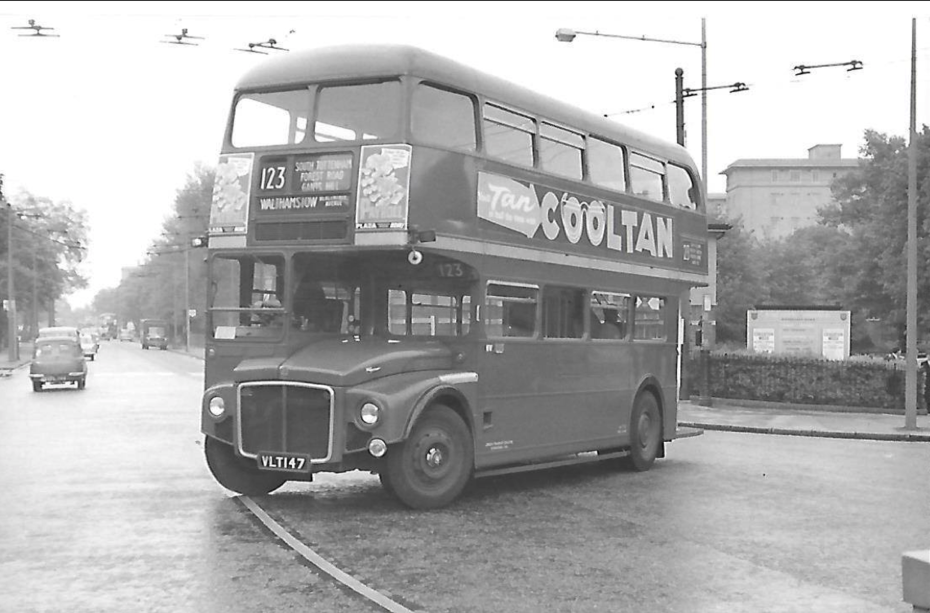 The 123 (Manor House to Ilford) was the first Routemaster operated route in the area. It replaced the 623 trolleybus on 27th April 1960. The overhead wiring remained here for another year until the last routes were replaced by buses 127, 259, 276 & 279. Some still familiar today.

I was taken for a ride on the first day by my mum and my 'first RM' was RM136 (VLT136) working WW36. Watching virtually the whole of the area's bus system being transformed over an 18 month period, as well as the dismantling of all the trolleybus equipment, was quite something for a kid to watch and was no doubt the spark that got me interested in Public Transport.

Seven Sisters Road in the background, was still very green and quite narrow. The widening was completed in 1969. Turning buses across the flow of traffic was temporarily allowed in 1936, when the trolleybuses were introduced and continued for decades. I'm not sure if it's still allowed or not.

AFAIK, the 279 bus from Waltham Cross still does this manouevre. can't see where else it could turn?

Yes it does; it's always slightly hair-raising, but it happens far enough back from the junction to be more or less practical (though ensuring the distance from tube entrance to bus stop is just the wrong side of annoying, especially in the rain). On a separate note, I wonder if the rampant building of shoebox flats all over the area will mean anyone's thinking of introducing new bus routes. If the developments at Plevna Crescent and St Ann's Hospital go ahead, a route which goes all the way along St Ann's Road might be sensible.

don't know about this but can anyone tell me if the 171 bus still runs.  it used to be on a very whimsical itinery of it's own when i was using it in the 1950s and 1960s.  i live in california to my great regret and haven't been in harringay for 30 years.

Don't know where it used to run but the 171 now runs Catford to Holborn, according to this: https://tfl.gov.uk/bus/route/171/?Input=171&direction=outbound

the 171 ran from bruce grove up philip lane, or was it west green road, left at black boy lane (can you say that?) past woodlands park school, right at st anns road, left on to green lane and then to all parts south of the river.

The 171, which commenced in April 1952, was the replacement route for Tram 33 Manor House > West Norwood. It was re-routed to Forest Hill in 1957 and cut back from Tottenham (Harringay) in 1986. Being replaced firstly by a 171A which later became today's 341 route. An earlier 1966 version of the 171A, a Sundays only route, ran from Tottenham (Bruce Grove) to Woolwich and Abbey Wood, one of London's longest routes at the time.

There has been a service along the eastern part of St Ann's Road, across Seven Sisters Road since March 1979 when the 67 was extended from Stamford Hill to Wood Green.

Brian, yes, the 171 was the most unreliable of all the bus routes in Harringay in the 50s and 60s as it is also ran on a 10 minute headway, which seemed an eternity back then, when most other services ran at 2-3 minute intervals.

Interesting for bus route enthusiasts is the eternal triangle of routes 67, 171 & 341. The original route 67 ran from Tottenham Garage via Stoke Newington, Moorgate, Waterloo, Clapham Common, South Wimbledon to Raynes Park. It was cut back to run Tottenham - Waterloo at the beginning of WW2 in 1939. The 171 joins the story in 1952, running Tottenham(Bruce Grove), Harringay, Angel, Embankment Westminster Bridge, Brixton, West Norwood. It was rerouted at Westminster from 1957 to run via Elephant & Castle to Forest Hill. The 67 was withdrawn as a consequence of the London Busmen's Strike in 1958 and the 171 was rerouted to cover it between Holborn Hall & Waterloo .. via Fetter Lane & Chancery Lane. A new 67 was introduced in 1961 running Northumberland Park to London Docks (Leman Street) via Aldgate. It was cut back in 1971 to run Stamford Hill to Wapping, where it was extended in 1966. The 171 was cut into two in 1986 and the northern section became the 171A Tottenham to Waterloo and later from Northumberland Park. It's replacement the 341 now runs to Waterloo to Northumberland Park. The 67 was extended to Wood Green in 1979, which had been the planned terminus of 171 before it was introduced in 1952.

Phew, I hope that makes sense.

Very interesting! So there's never been a bus that ran all the way along St Ann's Road (even now, you have to cross the road to change buses across Black Boy Lane to do so on the 341/67)?

No, there has never ever been a direct bus service from St Ignatius to the Salisbury - door to door. Even Route 60 in 1914 was very short lived, running only from March to June 1914. In those days, long before surveys, bus routes were introduced on a speculative basis - in the hope that they'd drum up new business. If they didn't, they didn't survive.

I have the L.G.O.C. April 1914 in my collection. It shows Route 60 running to South Tottenham, but via Nag's Head & Manor House. The Omnibus Society listings show it as running via Newington Green. As I said, routes ran on a trial basis, so it might have been planned to run the 60 via the Nag's Head, but the routeing was changed at the last minute. The scribbling on the map is now a hundred years old as was done by Ben Lazarus, correcting the map to September 1914 after the cuts made at the beginning of WW1 were made. From Holloway, he donated his whole collection of bus maps from 1910 to 1965 to me, way back in 1976. Now long gone, I'm grateful to him for helping me build my bus map collection up.

RTL 1262 on Route 171 shortly after introduction in 1952. Interesting Harringay is that the Intermediate Blind shows Green Lanes, St Ann's Rd, Philip Lane. Obviously shown to advertise the new routeing, although Manor House, the former tram terminus has been left out. Seen at West Norwood.