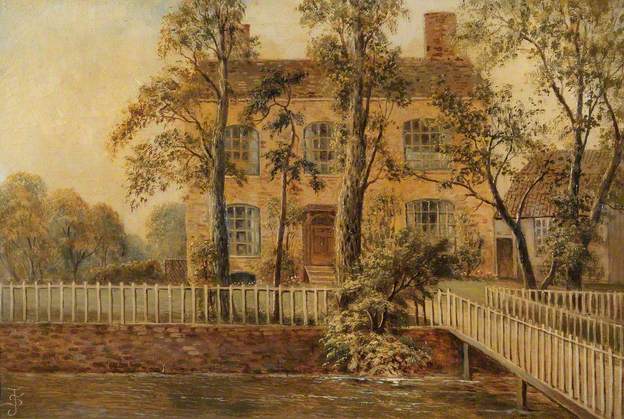 In the reign of Edward III, the Manor of Duckett's was in the possession of Sir John de Longford, the Lord Chief Justice. Joan, the widow of William de Brighte, released all rights to Duckett's to John and Alice Dover, and in 1460-1 Thomas Burgoyne and others gave it to St. Bartholomew's Hospital in Smithfield. At the dissolution of the monasteries, Henry VIII seized it and in 1547, granted it to Sir Robert Cecil. It was afterwards held by Lord Burghley; Edward, Lord North; William Parker; Lady Anne Compton; Thomas Sutton, the founder of Charterhouse; Sir Francis Poppam; Sir Edward Scott; and Dr. Edmund Trench, who having scruples about keeping property stolen from the Church sold the Manor, and until within comparatively recent years it was held in turn by a number of farmers.

Subsequently the house became a school, and was finally demolished about thirty years ago. The house was not a very pretentious one. It was surrounded by a moat, which was crossed by a bridge, and at one time possessed a fine chimney-piece of sixteenth century workmanship.

From 'Wood Green A History' http://freepages.family.rootsweb.ancestry.com/~treevecwll/wgh.htm

The painting can be seen at Bruce Castle Museum.

Thanks Liz for this very interesting piece. I wonder when this text was written.  The latest date mentioned is 1921 which would point to "about thirty years ago" meaning about 1890.  Looking at the map for 1863-1879 Dovecote House is still standing just north of eight large houses called Dovecote Villas and six smaller houses along what is now the High Road.  At that time these 14 houses were the only buildings on the East side of the High Road north of Turnpike Lane.  The 1896 map shows that by that date, the whole area was built up on both sides of the High Road, Dovecote House has gone and Bury Road has been built across its grounds together with a little street connecting the two where the original drive to Dovecote House used to be.  In 1896 this little street was called "Dovecote Avenue".  It seems that all of the buildings (mostly large villas) on the East side of the High Road between Turnpike Lane and Lymington Avenue were replaced by a commercial terrace and still later buildings.  It is nice to see that Dovecote Avenue is still there as a pedestrian access between the modern buildings near Barclays Bank.  I think that the house used to stand more less where the entrance now is to the Bury Road car park.

Noel Park's entry on Wikipedia suggest 1881 was the last recorded occupancy of the manor before the site was cleared, so your estimation of 1890 sounds about right.

I just came across a mention of what I think is this house. The Swinburne Letters: 1883-1890, Volume 5, Author Algernon Charles Swinburne, Editor Cecil Y. Lang (1962) includes mention of a letter hand-written by Theodore Watts to his friend, poet Algernon Swinburne, from "Dovecote House*, Wood Green", on March 3 1889.

The only connection other than this that I can find for Watts to Wood Green was in a 1904 biography of Watts by James Douglas, which includes the following. "He was a great pedestrian, and, being very much attached to the north of London, would take long, slow tramps ten miles out in the direction of Highgate, Wood Green, etc."

Most of Ducketts was bought in 1862 by Thomas Clark, who built twelve houses south of Dovecote House but retained the rest until 1881. The Ordnance Survey map of 1869 shows that the moat (visible in the picture) was still intact. We can track Clark's sale of the land in the contemporary press.

The London Encyclopaedia has it that the house was destroyed in 1870, but I can find no corroborating evidence for that yet ther is evidence to suggest it lasted beyond that date.

On 24 May 1881 the Daily Telegraph & Courier carried the following advertisement:

Tottenham Parish—A highly valuable Freehold Building Estate, comprising 96a. 2r. 12p a plot land in the mam road (next the station), and a plot la a side toad, the property the late Alfred Jones, Esq.

MURRELL and SCOBELL wiII SELL, at the MART, on THURSDAY. June 16. at one o'clock punctually, by Older the Executors and Trustees, in three lots:

Lot 1. The Freehold Estate, known as Dovecote House (Duckett's), situate in the Green-lanes. Wood-green, adjoining the station of the Great Eastern Railway and within a few minutes of walk Hornsey and Wood Stations on the Great Northern, and comprising a homestead and 96a. 2r. 12p. of pasture land, having good approaches from Green-lanes and Lordship-lane, and ripe for immediate conversion to building purposes. The estate contains good brick earth and is let on lease (with power to the lessors to take the laud for building as they may require), at a rent of £400 per annum

Lot 2. A plot of Freehold Building land, next the station, on the high road, and fit for shop property

Lot 3. A Plot of Freehold  Land with frontage to Wellesley-road adjacent, with return frontage Boundary-road.

May be viewed. Particulars may be had of Messrs. Roberts and Barlow. Solicitors, 49 Lime Street, E.C.; at the Mart ; and of the Auctioneers. 1, Walbrook, City.

The 1893 OS map shows a number of semi-detatached houses built on the site of Dovecote House. So, if the Swinburne reference is accurate, and not referring to a later building that had taken the name, we might assume that Dovecote House was knocked down at some point between 1889 and 1893. If the Swinburne reference proves to be misleading, we can be sure that the house was demolished at some point between 1881 and 1893.

The houses developed after the 1881 sale weren't to last and were themselves demolished for the development of Cheapside in 1911.

(*By the middle of the nineteenth century the building that had been Ducketts Manor, then Ducketts Farm had become Dovecote House. In 1862 7 pairs of villas, called Dovecote Villas were built immediately to the south of Dovecote House.)

Here's an article from the Islington Independent (9th Jan 1878) mentioning seeing this house form the new train line built just behind it: Interesting reference to the poet Algernon Swinburne, a remaining house (probably one of Thomas Clark's) from the 1880s can be seen behind the single-storey shopfronts opposite Nationwide Building Soc. in the High Road.

Yes, I'd been wondering if that might be half of one of six pairs of semi-detached villas called Dovecote villas built in the 1860s. (Though I suspect not since a surviving photo of one of the pairs shows no rounded arches on the third storey windows - I'm assuming that all the pairs were identical - though of course they may not have been!).

The history of thee houses seems a little confused. Albert Pinching writes of 'twelve pairs of houses', but the 1863 OS map suggests that there were seven pairs, twelve houses. Newspapers of the time make mention of various people living in the villas, but no mention is ever made of an address any higher than 14 Dovecote Villas. Kelly's Directory confirms this.  They used to stretch from just north of where Whymark Avenue is to day, to just north of where the old M&S building was.