This water colour shows a view looking west along Priory Road towards the bottom of Muswell Hill. The view is from roughly where the junction with Danvers Road is today.

In the foreground on the right is the Pound, an enclosure for stray animals. The group of buildings beyond is shown in other views (see tag link for the Pound, below).

I assume that the bridge on the left crossed a tributary to the Moselle. It was just after the point where the St Jame's Brook, which ran down Muswell Hill joined with another tributary running down where Cranley Gardens and Etheldene Avenue are today.They used to form a pond just to the west of Park Road. The stream then ran on along the south side of Priory Road before joining the other Moselle tributaries near Middle Lane. 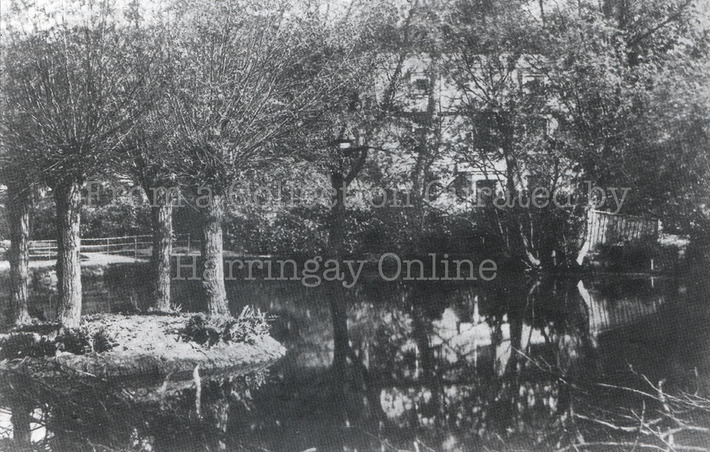 Pond at the junction of Park Road and Muswell Hill. Although the pond was in the grounds of Lalla Rookh Cottage (photos here), I believe that the photo is taken looking north across the pond towards the first house on Muswell Hill. I think the driveway, beyond the fence to the left of the picture led off to Lalla Rook. The photo is dated to around 1860.

For six months in 1817, Lalla Rookh was home to the poet Thomas Moore. Wikipedia shares the followig:

The name Lalla Rookh or Lala-Rukh (Persian), means "tulip-cheeked" and is an endearment frequently used in Persian poetry.....(Moore's poem, Lalla Rookh) was completed in 1817 while Moore was living in a house in the countryside of Hornsey, Middlesex, and the house was renamed, possibly by Moore himself, after the poem.

Tags (All lower case. Use " " for multiple word tags): priory road, the pound
Albums: Historical Images of Hornsey | 2 of 2

There's a photo of Lalla Rookh from the V&A here.

Very surprised at the size of the pond. I wonder what happened to all that water after building over it. Presumably why that area floods from time to time!