The Hornsey National (or British) School for Boys school was established on the north side on Priory Road by 1815. In addition to a schoolroom, the building included accommodation for the headmaster and his family.

By 1873 the school had moved to the site of the present-day Grieg City Academy on the High Street.

Between at least 1841 to after 1851, the school was was Richard Lowe, He lived in the schoolhouse with his wife and three sons.

The census of 1861 shows that one of the last heads was William Drake. Born in Camerton, Somerset in 1824, his father is recorded working as a servant at the time of his birth. By his mid-twenties he was the head of a school in Milverton Somerset. Ten years later, he was heading the Hornsey National School where he lived with his wife Mary and their three children aged between 12 and 2. By 1871, he was living in a large house on Green Lanes in what is now Harringay and described himself as an accountant. Ten years later he was at 1 Stapleton Hall Road, working as a shorthand writer.

The former school buildings were not immediately demolished. Instead they were rented out as living accommodation. I assume Drake's former accommodation was readily usable as a rented home. The electoral register as late as 1886 included an occupant at Old School Cottage, Priory Road.

The photo below was taken on 1898. Recently built houses on Priory Road (just to the west of Priory Avenue), can be seen on the right of the image. 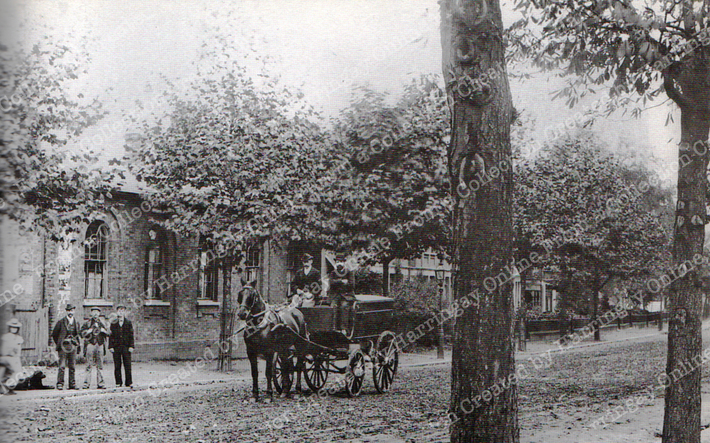 The 1881 census below, shows it in the occupation of a gardener and his family.

The school building was demolished shortly after the photo was taken. Today numbers 48-54 Priory Road (link to Google Street View) stand on the site.

The new school, St Mary's, occupied from 1873 and altered in 1929 courtesy of an endowment by local grocer, David Grieg. The photo was taken in 1976, shortly before the building was demolished. So is the mentioned David Grieg (or Greig) the man behind the chain of David Greig Grocery Stores that once featured in High Streets ?

That's the one, John. He got his start on Hornsey High Street.