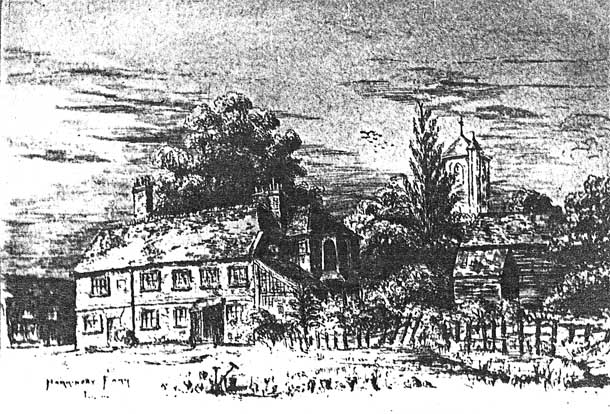 This building stood to the eastern side of Tottenham Lane. You can see the church which remains today near the corner of Rokesley Road.

If you'd like to learn more about the history of Harringay , see my article on Wikipedia providing an overview of the History of Harringay. The series box at the top of that page will take you to more detailed articles I've sketched out on periods in Harringay's history.

The spire of the Holy Innocents church is distinctive: 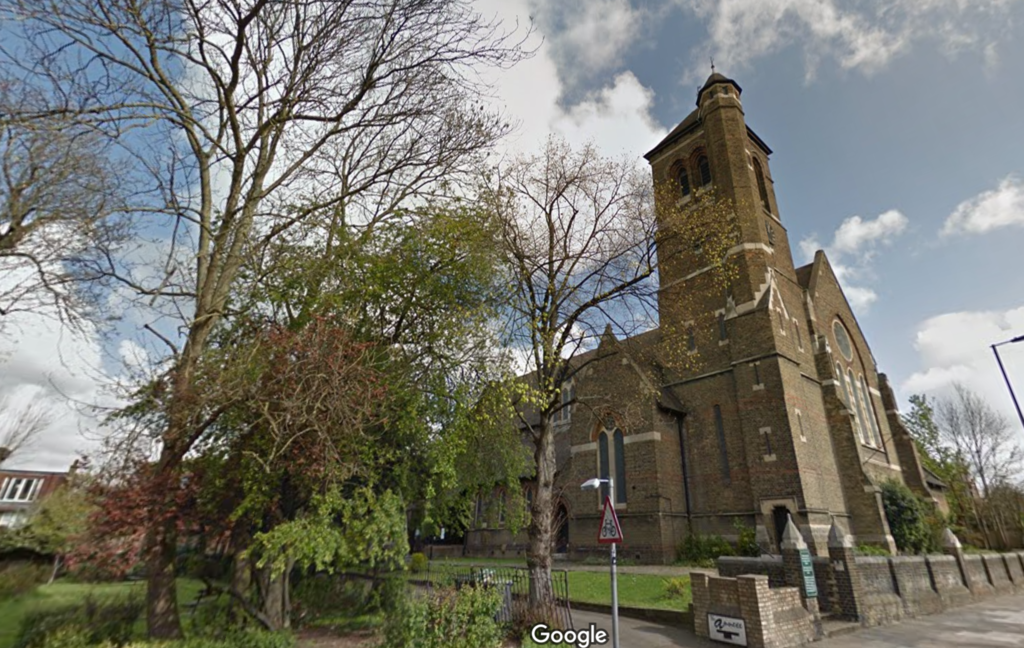 I found this from https://archive.org/stream/historytopograph00llovuoft#page/292/mode...

"HARINGEY HOUSE, which stands on the eastern side of the railway behind Hornsey Station, is built on the site of a fine old Tudor mansion, which was pulled down about 1750, and which was the seat of the family of COZENS for some two hundred years. This family is still represented in the parish by Mr. Charles Smith of Muswell Hill.

Mr. Ide Cozens sold the property to a Mr. Grey, who in his turn disposed of it to Mr. Chapman, at one time a partner in the unfortunate firm of Overend, Gurney, & Co. The property has recently been sold for building purposes, and is now cut up by no less than nineteen roads!

There are some good houses both in Middle Lane and in Tottenham Lane, but none calling for special remark. At the corner of Ferme Park Road stood until recently an old house called Haringey Farm (see p. 294), probably the old manor house of Ferne or Fernefields, a small manor granted by King James to the Earl of Mar in 1603 ; 2 it must have been of inconsiderable extent, as it was only valued at £10 per annum."

I wonder which 19 roads they are talking about :)

A little research I did ten years ago, Joe, showed that the idea of a Tudor mansion on the site of Harringay House was almost certainly a load of tosh. See this settlement section in one of my Wikipedia articles, and in particular footnote 11. The  "Tudor mansion" was probably a mix-up with Harringay Farm (above) which looks like a likely contender for a much older building of some local significance.

The most recent mention I've found of the Cozens family relates to their acquisition of the freehold of Farnefields Manor in the early nineteenth century.

I've speculated about what this house was previously, but without a good deal more research it's not certain. It's certainly looks to have had a certain grandeur, but when I compare my 1754 Rocque map of Hornsey with a map showing the boundaries of Hornsey's manors it's not clear that the building pictured above was on Farnefileds land. It looks as likely that it was on a plot called Farmers Field which ran alongside part of Farnefields.

Are these the right Cozens from Magdalen Laver: http://www.enfieldindependent.co.uk - Ide Cozens being the son of John Cozens Jr and Elizabeth Ide?

The timing of the sale to Gray seems right: "Some time before April 1782 John Cozens mortgaged the estate to Mrs. George Sealy for £750. He died in 1784 having stipulated that the estate should be redeemed out of the proceeds of sale of his freehold lands in Hornsey (Mdx.)" (from http://www.british-history.ac.uk)

This map of 1822 (overlayed on google) shows the houses on Tottenham Lane of Cusenau (?), Reeves and Simmons round about where Ferme Park Road is now:

This is what I was referring to:

It was inherited in 1765 by Thomas Wilcox of Westminster, bookseller, whose widow surrendered it in 1800 to William Wilcox, who in 1808 sold it to Edward Gray of Harringay House. (fn. 49) The freehold estate passed to John Cozens, nephew and devisee of William Cole, and in 1772 to his eldest son John Cozens of Magdalen Laver. (http://www.british-history.ac.uk/vch/middx/vol6/pp146-149)

So, what appears to have been the copyhold only was sold to Gray about 20 years after he built the house. Records suggest that the manor lands had been long broken up by this time. Where Harringay House was built was in Farnefields land, but I  cant recall any evidence to suggest that it was on land leased from the Cozens (but it may well be that i've just forgotten).

This makes it sound likley that the portion of land on which Gray's house was built was never related to the Cozens. By the way this section from which this second excerpt was taken shows a more comprehensive history of Farnefields. Below is the excerpt of the map showing the lands within the Bishop of London's Hornsey Manor including the subinfeudated Manor of Farnefields. I can't vouch for its accuracy since it was drawn up by a couple of early twentieth century historians. I hadn't previously spotted the Cuseneau name on the 1822 map. They may well be the Cozens, or they may not. I hadn't ever studied the section of the Harringay Farm picture showing the church in too much detail. I'd always assumed that the picture showed the house almost opposite the church, to its east. Looking at it more closely now, I can see that my assumptions were wrong. I can see that in fact the picture shows that the southern face of the church tower faced towards the farm house. That means the site of the house could  match the spot where the Cusenau house is on the 1822 map, but if what we read about it having been on a site near where Ferme Park Road meets Tottenham Lane, the Cuseneau house is too far to the south - but good sleuthing. Perhaps they owned more than one house?

It's almost certain that the reference you found to the Cozens is the same as the Hornsey one. The Enfield Independent says:

A lucky man in terms of fortune, John Cozens’ father, also called John, had worked as a servant to the wealthy landowner Henry Cole who lived at the manor house in Magdalen Laver and owned properties stretching from Ongar, through North Weald and into Hornsey, then in Middlesex.

When Henry died a bachelor, in 1760, he left all of his personal estate to John Cozens snr who suddenly found himself a man of fortune

Further up in the book from which my first quote came we learn that the Cole family owned at least a part of Farnefields:

In 1729 King conveyed the freehold to his nephew William Cole of Magdalen Laver (Essex) (fn. 45) and left the copyhold to William and his heirs male, with remainder to his other nephew Henry Cole. By 1731 King and William Cole had died and the copyhold had passed to Henry Cole. (fn. 46) It was inherited in 1765 by his cousin Thomas Wilcox ...... etc

BUT, I've just found reference to John Cozens will:

(ii) will of John Cozens, snr., 1782, devising all freehold lands in Hornsey, co. Middx., to John Trayhearne of Stanstead Abbots, co. Herts., upon trust to sell the same in order to discharge mortgages of £2000 and £750; (iii) in pursuance of above trust, sale of lands in Hornsey, co. Middx., for £3981 14s., to Messrs. Edward Gray and thos. Godson (http://seax.essexcc.gov.uk/result_details.aspx?ThisRecordsOffSet=1&...)

Cole left the his estate to a John Cozens who died in 1766. His son died in 1782. I think we can safely assume, as you do, that Ide-Couzens was the grandson of the John who died in 1766, the son of lovers John and Elizabeth. So in fact it seems likely that the Cozens did sell Gray the land for Harringay House - and it's also very likely then that as I've long suspected that the "fine old tudor manor" was indeed Harringay Farm, which was once under the ownership of the Couzens. This may also explain Gray's; choice of the name of his new home and hence our neighbourhood.

For anyone digging more about this, it's worth mentioning that Fernefields Manor wwas known variously as:

"This may also explain Gray's; choice of the name of his new home and hence our neighbourhood."

Possibly, but do we have any evidence that the building known as Harringay Farm in 1880 was actually called that in 1790 when Gray bought the land?

I found Harringay Farm in the 1881 and 1871 censuses inhabited by a family called Collingwood. In 1861 the house they live in is named as Manor Farm (actually Mavor Farm thanks to character recognition). I haven't managed to find either in the 1841 census yet as I don't have a paid subscription. But it seems possible that this house (which I agree is a highly likely contender for the original manor house of Fernefields Manor) become known as Harringay Farm because of it's association with Harringay House rather than vice versa? I think I prefer the idea that Gray wanted to resurrect a name which had fallen into disuse :)

Good sleuthing, but you're right to be cautious. For what it's worth here's my source:

In the early 19th century buildings were scattered along the east side of Tottenham Lane from near the junction with Church Lane to near the modern Ferme Park Road, where they became continuous. Harringay or Ferme farm-house was a stone building of two storeys and three bays, to which two bays had been added at one end and sheds at the other.

(From Hornsey, including Highgate: Growth before the mid 19th century, A History of the County of Middlesex: Volume 6: Friern Barnet, Finchley, Hornsey with Highgate).

My understanding is that Ferme Park Manor, Ferme Field and Fernfield, Harringay Farm and Manor Farm were somewhat interchangeable. With all our apparent sophistication today, look at all the names our own neighbourhood has! I have a copy of a letter of attorney from 1605 making it clear that Harringay and Fernfield were at that time one and the same. It may have varied over time. What's the earliest mention you've found of Ferme Park?

I've tracked down another 1880 image of Ferme Park Manor today, but may find it ends up being the same as the one above.

Another meagre offering to throw into the pot (if for no other reason than to gather together for myself related bits of info for future rediscovery!).

On the name of farn-/farne-/fern-/ferne-field/s, it's one of at least a handful of similarly named places around the country. All the references I can find suggest that its name originally referred to a field of ferns - not rocket science!

One source has the following:

This interesting name is of Anglo-Saxon origin and is a topographical name used for a place where ferns were abundant. The derivation is fern from the Olde English pre 7th Century word fearn, a collective noun. There are a number of variations of the modern surname, ranging from Fern(e), Fearn(e), Feirn, Farn, Fairn and Vern(e) to the plural, genitive forms, Ferns, Farnes, Varnes and Varns, meaning "of the ferns", the forms with "V" for "F" being the southern and south-western Middle English variants.