This photo shows the Criterion Buildings, erected in 1896. It replaced the much photographed old smithy that used to stand at this junction (Broadway with Crouch Hill and Crouch End Hill).

This image was taken shortly before the building was demolished (c1938), the junction remodelled, the current bank buildings erected and much of the east side of Crouch End Hill redeveloped. Whereas previoulsy, it had been a relic of Crouch End's vllage past, it was soon to become one of the most modern parts of the town.

The new bank building was set back, further south than the late nineteenth century one. This is evident when the 1936 Ordnance Survey map is compared to the 1951 map. 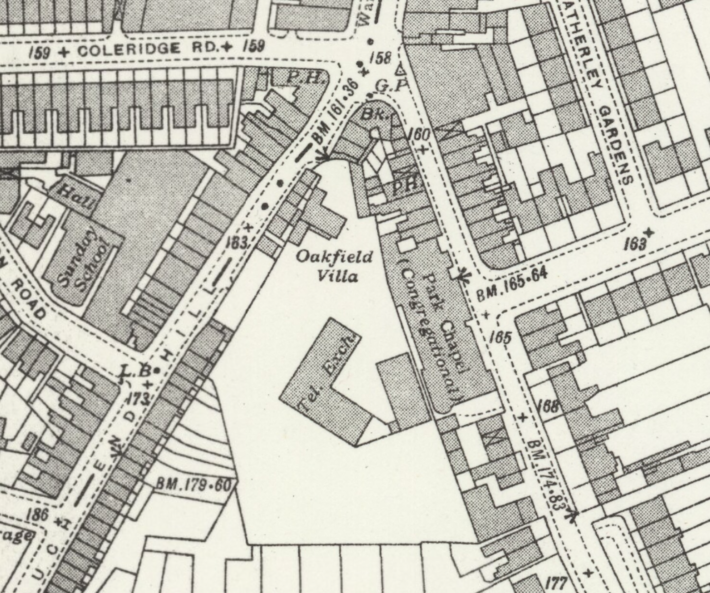 The gap behind the Criterion Buildings. on the left of the photo, shows the space where 155 Crouch End Hill had  been demolished in preparation for the forthcoming changes.

On the right of the photo (if you click View Full size below) you can see the Railway Tavern built in 1937/38, an early result of the remodelling. The tree just behind the bank building was in the garden of Oakfield Villa, the home of City fur and feathers merchants, the Sugdens.

The villa was bought by the Office of Works in 1933/34 and was used by the Hornsey Social Services Council as a recreational centre for local unemployed for three years or so.

The area was then redeveloped. At the time of this photo, beyond the old villa, set back from Crouch End Hill, the Mountview telephone exchange had just been built as a new base to replace the building that had stood to the north of the New Hornsey Town Hall. The former exchange building was incorporated into the newly completed Hornsey Town Hall, as an Annexe.

Back on Crouch End Hill, the space between the new bank buildings and the Railway Tavern was partially filled with 3-5 Crouch End Hill (which still stands today). However, development was then interrupted by the War. It was completed in the 1950s with the erection of another building abutting the 1930s exchange building. Further up the hill, Exchange House was built.

An earlier view of the building can be seen in this c1905 photo.