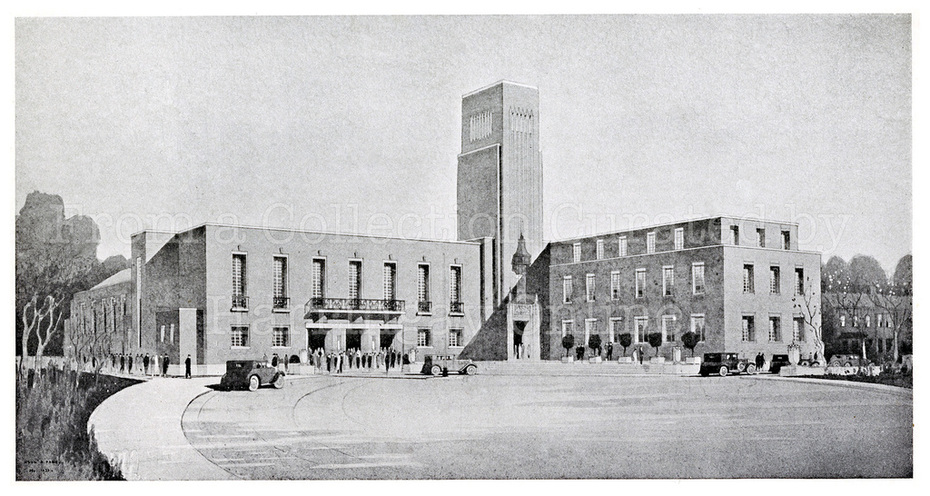 I love the 1930's chic in this image. It's signed in the bottom left hand corner by A Parry or "Something A Parry" and the date appears to be May 1930. If that's right, since the town hall wasn't opened until 1935, I'm assuming that this must be an artist's impression".

I think this might have been submitted as the winning entry in the Borough's 1933 design competition for Hornsey Town Hall. 218 entries were assessed by Charles Cowles-Voysey, who had recently designed Worthing Town Hall. Charles was the son of the famous Arts & Crafts Architect/Designer Charles_Voysey). That could be why many of the interior fittings were also architect-designed.

The prize of £150 was awarded to Reginald J Uren, an architect who had worked his passage aged 24 (in 1930) as a stoker from his native Christchurch, New Zealand to study at the Bartlett School of Architecture, part of UCL.

It's hard to imagine that this sketch could have been drawn in 1930. It's pretty much an exact rendering of what was actually built (the 'missing' bit on the left was added a few years after HTH was built). 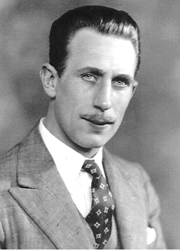 R J Uren would have to have immense clairvoyant powers to be aware of his solution in 1930, given that the constraints on the site published in the brief were not available then.  He wrote later of his success at fitting the solution to the awkwardly-shaped space - he surely could only have known that by reading the competition brief, probably in 1932.

Sadly most of the paperwork associated with Hornsey Town Hall has not been preserved, so we may never obtain proof. This issue is still relevant today - our Council has a huge amount of paperwork but do they look after the old stuff?  Who knows what may be of vital interest in future?  A lot of work they've done around Hornsey Town Hall in the last fifteen years they hold in secret under 'commercial confidentiality' grounds. There is no 50 year rule or whatever - information wants to be free!