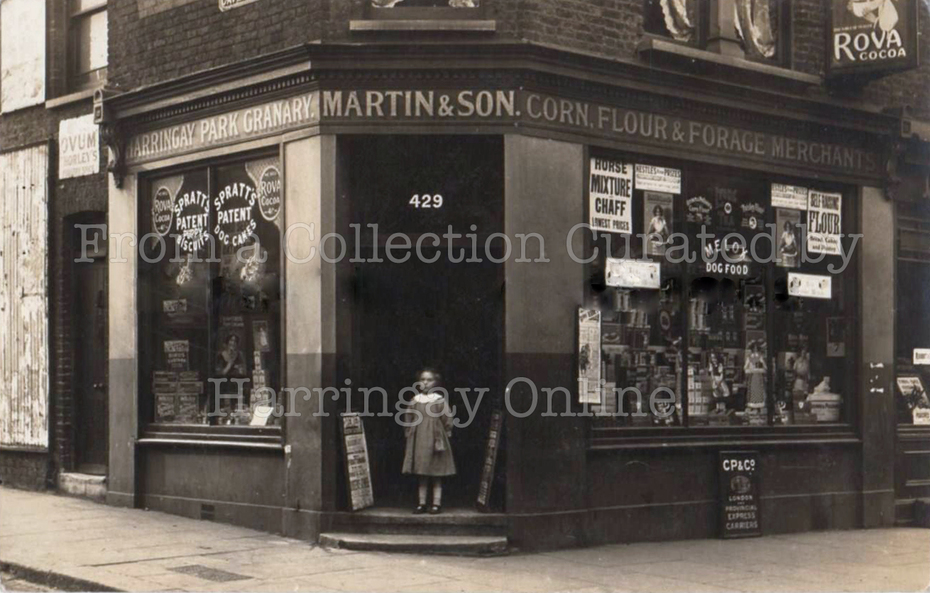 This image shows the building on the corner of Cavendish Road, which has stood empty for the past few years but, until recently, still carried the signage of Vadi restaurant.

Proprietor George Martin was apparently a keen photographer himself. In 1890 he is recorded as having been appointed as the Honorable Secretary of the North Middlesex Photographic Club. This group published some of the oldest pictures of Harringay carried on this site.

Here's how Martin was advertising the store in the Islington Gazette in 1904.(A later ad shows that once the typo in the first line is corrected it should read "TO HEADS OF FAMILIES"). Both 429 and 431 Green Lanes were built by Alfred and Thomas Pryor, trading as the Pryor Brothers builders. The brothers’ partnership was dissolved in 1891 and Thomas carried on as a builder trading under his own name. He gave his address as Harold House, Cavendish Road. The cow heads at the top of the facade of 431 Green Lanes give the game away as to which houses he may have built on Cavendish Road, but I'm uncertain as to whether he styled one of these as Harold House or if it was perhaps one of the buildings behind one of the shops.

Electoral register records show that Martin was running the Harringay Park Granary on Green Lanes from at least as early as 1885. From 1897 the address is shown as 429 Green Lanes. It is also indicated as his dwelling house. He surrendered his lease for the premises in 1921, after 36 years. He must have been one of the first traders to set up on Green Lanes and we might assume that he stayed there until his retirement.

Records also show that between at least 1892 and 1904, Martin was recorded on the register of electors at 37 Leather Lane in the City. In 1905 he was at number 64. It may well be that this was where he started out and kept on a second premises there. Oddly I can find no record of him or his family in any census.