220 Clyde Road is long gone. It was near the junction with Phillip Lane. 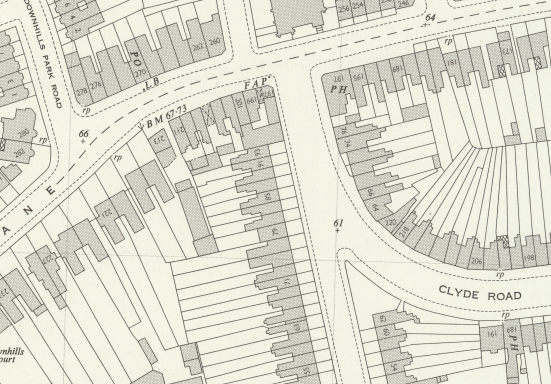 In the photo, next to the door, are adverts for Harringay's two early cinemas. The Hindoo, showing at the Premier Electric was released in 1912 (this is where I got to 1912 date from).

Henry Harby was born in Peckham in 1861. In 1863, his father, Alonzo died. Four years later his mother Mary Ann (nee Jubb) remarried (to Reuben Harby from Spalding) and by the time of the 1871 census Henry was living with Marry Ann's brother, William Jubb and his wife, Hannah, both from Spalding, Lincolnshire. The family were living at 220 Clyde Road, where Jubb was running a grocer's shop.

Jubb was also running an ironmongers next door at 64 Summerhill Road (see map - it was actually part of the same terrace even though -t had a different street address). In fact records show that he owned 64-66 Summerhill Road.

In 1883, Henry married Gertrude Sayers and we can see from the Register of Electors that the couple moved into three rooms at 7 Summerhill Road, a property also owned by Jubb.

By 1898, Henry had moved his family into 220 Clyde Road and was running the shop under the name Harby & Co. In 1901, the census records that he had two sons, Alonzo 16 (named after Henry's father who like his uncle came from Spalding) and William 14.

William Jubb had retired and was living next door at 64 Summerhill Road. Before his death, he moved to a house at 238 Phillip Lane.

From 1899 to 1902, Jubb was Chairman of Tottenham District Council. He died in 1903. Something of his story was told in one of his death notices.

The last record of the grocers shop is in 1914. 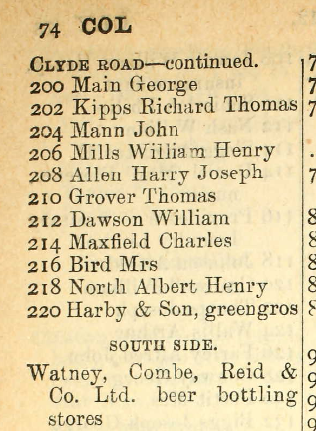 Thanks to Norman Stuckey for the photo.

I sent this through to Alan Swain of the Summerhill Road website yesterday. He seems thrilled with it all and has drilled down to the next level of detail. He intends to write a piece for his website.