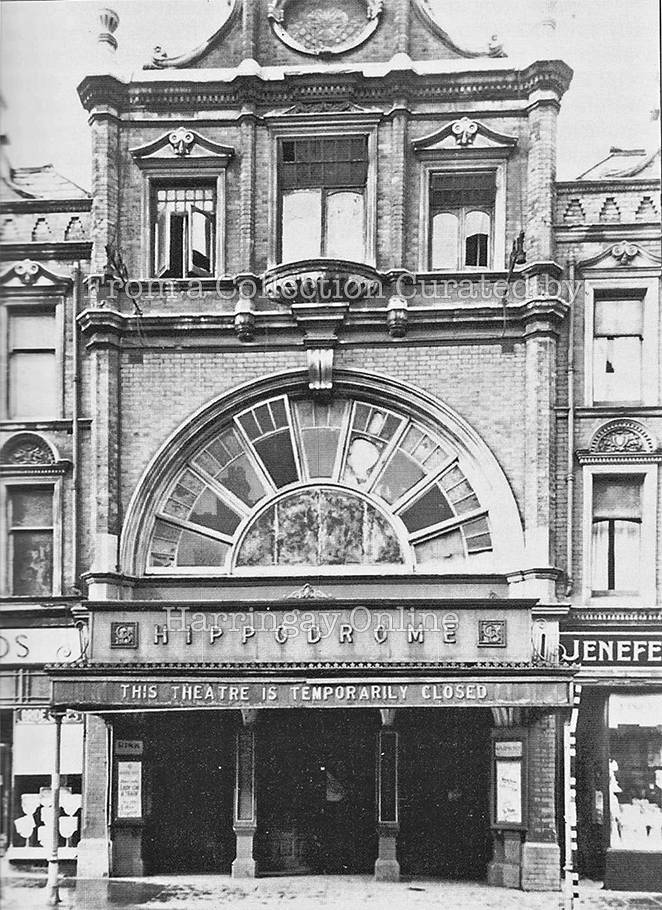 Topsfield Parade itself was built in 1895, as a parade of shops, with flats above. Number 31 was used as the entrance to a public hall built at the rear. This short-lived incarnation of the building was called the Crouch End Atheneum.

When the Opera House opened two years later, the opening show was a production of “The Geisha”. With an intimate auditorium, with a seating capacity of 1,200, several famous actresses appeared at the Queen’s Opera House in its early years; Ellen Terry, Mrs Patrick Campbell and Lily Langtry.

On 24th December 1904, during rehearsals for the pantomime “Sinbad the Sailor”, a piece of scenery caught fire, igniting stage curtains and drapery. The resulting fire destroyed the stage and dressing room section of the theatre and did some minor damage to the auditorium.

The damage was eventually repaired and the theatre re-opened in January 1907 as the Hippodrome Theatre, presenting vaudeville, with occasional plays. On 4th August 1913, it ’re-opened’ as a full time cinema. Occasional use of the stage was made by amateur operatic companies and amateur dramatic groups.

In 1928, the Hippodrome Theatre was taken over by the Gaumont British Theatres chain. They employed architect William Edward Trent to make alterations when sound was added in 1929. Seating was reduced to 1,000. At the end of April 1942, during the height of World War II, it suffered from a major fire and was closed permanently.

In 1948, a dancing school occupied part of the building. Then in the early 1950s, like the Harringay Arena, it started to be used for storage. On 20th January 1958, Grattan’s mail order company took the building over and removed all the remaining decorative features, using the building as their London distribution point. They covered the facade in black tiles.

After many years, they vacated the building and the remaining part of the auditorium was demolished, leaving the facade and foyer intact.

The building behind is now home to a health club.

Gosh how beautiful. Such a shame the facade wasn’t preserved.

Most of the facade was preserved - but that's about all that was.

Just flicked between old a new and noticed that a correction is in order.

What I had thought was a preserved facade. looks to me like a completely rebuilt-in-the-style facade. A few of the plaster adornments of the original facade may have been reused or recreated, but it looks like most is a rebuild. The overall height has also been reduced to fit with the surrounding facades.

I think you're right Hugh. The present façade was rebuilt - I believe - about 25 years ago, it replaced an ugly building with black windows. I think that the gym/health club that bought the older building had to rebuild it in the original style or they wouldn't be able to buy it.

My husband Michael Wallis, born in 1950, lived at 26 Topsfield Parade. He remembers playing in the bombed-out shell of this building. He tells me he can remember the wall lamps inside that were shaped like large cow-horns. When Mike was about 12, he worked at the Bordsley's pet / grocers shop around the corner in Park Road.