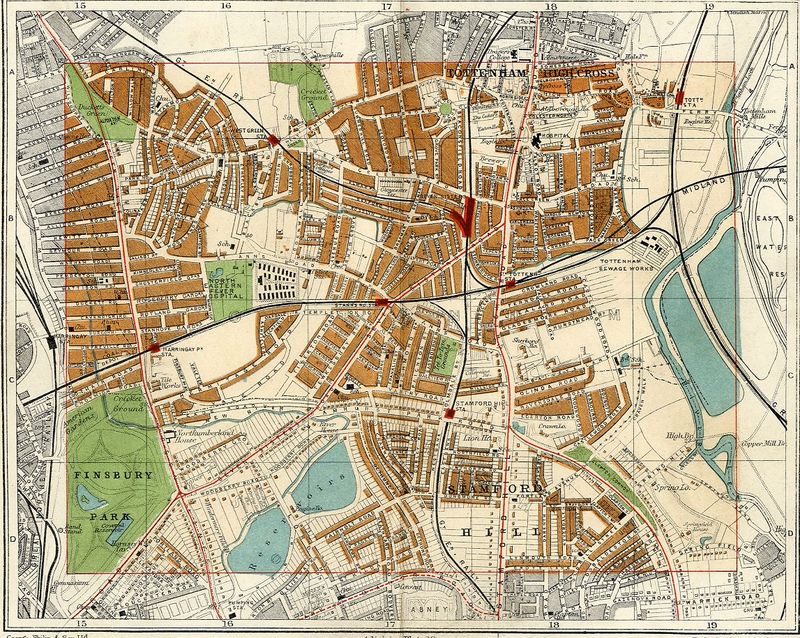 Interesting for several things, including:

Comment by Takaokagiejin on May 6, 2013 at 9:51
There appear to be no buildings along the East side of Vale Road and Vale Grove. However the Victorian terraces here were built in 1891. It even says 1891 on the outside of one of them. Either the map is older than we think or it's incorrect.

Good point. I think during the late Victorian period, building was happening so fast, mapmakers didn't always keep up. In the case of commercially produced maps, like this one, I assume it was for reasons of cost.

St Ann's Hospital wasn't complete till 1892. That would suggest a later date, but the Vale Road date suggests that something doesn't add up. I'm assuming that these are just date inconsistencies by the mapmaker.

Great link, but in what sense is the map wrong?

What does the brown on your map indicate? If it indicates houses then I'm quite curious because it shows houses on Oakdale Road but all the houses there are 1930s ones. Also your tunnel map doesn't show any houses there, but seems to be laid out in preparation for construction. What is the date of that map?

The original map I added shows the original buildings, but not the later ones which suggests it's working on pre-1901 data. As Tako pointed out earlier, it seems to be working on OOD data or I was given the wrong date of publication.

There seems to be some inconsistency in dates on the workhouse.org page you linked to. The article from The Builder says, as I believe, that the hospital was originally opened in 1892. Elsewhere in the article it gives a date of 1882. It also refers to the new building as taking place twenty years after the original, but elsewhere it says it happened in 1901. I guess they'd have taken that 20 years from 1882.

The years I'm working with are 1892 for the original build, 1901 for the subsequent build with around 1930 for the replacement of the original temporary buildings.

You'll also note that The Builder referred to the hospital as being in Stamford Hill. I think that was normal up to about WWI.

Yes, I had noticed that too. What is the date of the map you have with the tunnels?

Not sure about the date. I'll have to dig it out and take a look. I know that some of the other maps that came with it are 1947.

Just a couple of points The railway was completed in 1868. I imagine the underpasses date from then? I can't imagine them being built later.

As for the map showing Oakdale as built up.. I actually think the brown denotes 'streets already laid out'.

Obviously, Oakdale road was planned at the same time as Ashfield and beechfield Roads which do have housing from the edwardian period.

The red lines down the centre of some of the roads must indicate street tramways.For example, look at Manor House junction !  Unfortunately I know little about Tramway History, but could this be used to accurately date the map ?  http://anidea.co.uk/lower-edmonton/transport/road/trams.html According to this MET and LCC linked together in 1906 at Stamford Hill. I agree with previous posts in that this mapmaker's job is just to sell maps for a profit & not to accurately record every spec builders development. Hope this helps?