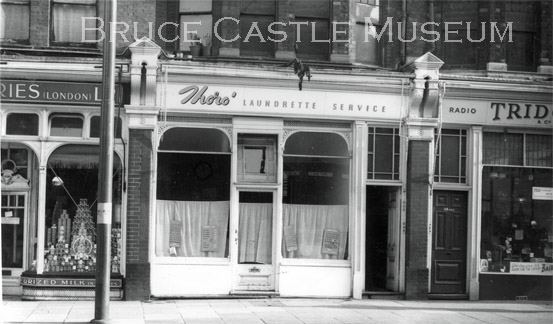 Between Stanhope and Rutland.

Comment by Hugh on April 7, 2008 at 21:10
Just look at those shop fronts, particularly the door and windows on United Dairies. Now all gone. Very sad.

Comment by alistairj on April 7, 2008 at 23:19
Seems lavish detailing on the dairy for the selling of 'pasteurized milk' but a real shame that it is now lost. Fortunately not all local dairy architecture has gone the same way.

Comment by matt on April 8, 2008 at 6:57
There was a Dairy still operating until about ten years ago, on Turnpike Lane. A older couple ran it with her looking after the shop and he doing the milk rounds. He parked his float on land next to their end of terrace shop. Capital Accommodation have now in filled that with their offices. The Dairy was operated like yesteryear - wonderful. Gone forever now as the couple retired and the next generation of business moved in.

Does anyone remember the name of the laundry on Green Lanes that did what my mum called bag wash?  We used to take our sheets there.  Also the place on, I think, the bottom of Frobisher, near the Regal cinema, that sanitized old rags.  It had a very distinctive smell as you walked past it. As kids it kind of spooked us and we used to run past it.

it back  in white linen bags.

I think Stephen's right. It was Oceana Laundry that used to offer a bagwash laundry service. But they weren't up by Colina Road. That was another laundry. Oceana was on St Ann's Road, but had a receiving office at 30 Grand Parade.

- Wise's Laundry, Colina Road (The listig below is from the 1955 London phone directory).

There were a range of smaller ones, includimg one just south of he Beaconsfield. The following is from the Tottenham and Edmonton Weekly Herald, 14th May 1909.

There was also Wise's Laundry Hugh, up the other end of Oakwood in Colina Mews.   This has now been converted into flats or apartments.  Think it may have had another name at sometime.

My Mum and Dad both worked at The Oakwood Laundry probably in the 40/50s and Mum also later worked at Wise's.  Very convenient as we lived in Harringay Road !   Colina Mews (or "The Lucky" as it was known)  was second home to us kids.   We used to spend hours playing up there and in Oakwoods scrap parcel of land which was known as "The Coals".    Coal used to be stored there for firing the boilers and the hot cinders would also be dumped there.

Thanks, John. Hadn't heard of Wise's. It keeps it head down in the archives! The only place I could find any trace of it was in a mid-century London phone book. (see edited comment above).

I can see that they moved into the premises formerly occupied by Rest Cartwright Organ Builders (who also built the organ for the Coliseum Cinema). Shown below on 1952 Ordnance Survey map. 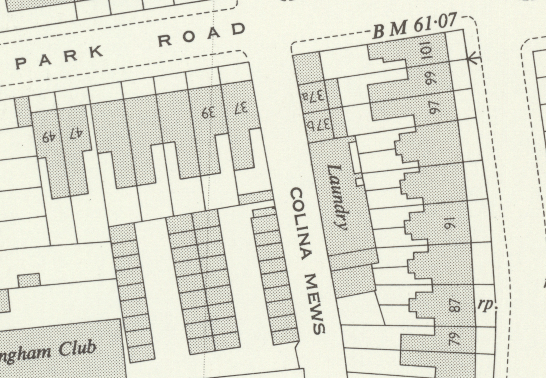