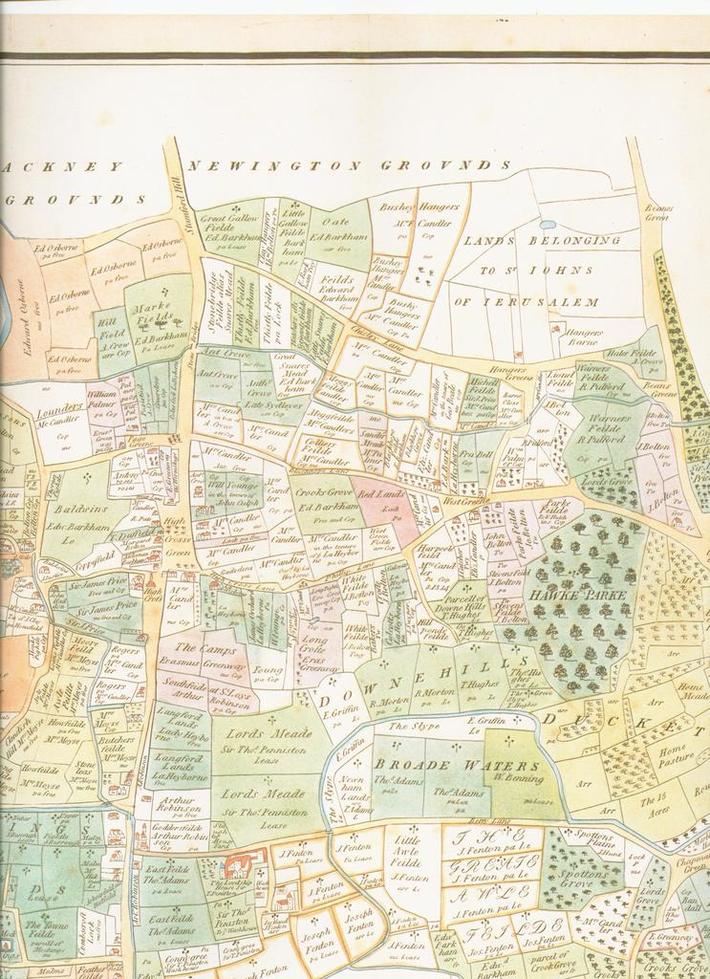 This is the high res version of the 'Dorset' map of Tottenham available in the Wikipedia entry on Tottenham (here: http://en.wikipedia.org/wiki/Tottenham). What is interesting about it is that it includes (in the top right corner - it is oriented with south at the top) the old shape of St. Ann's Road ('Chisley Lane'), the rough location of Chestnuts Park ('Hangers Greene') and the area of the Gardens Streets is marked as 'Lands belonging to St Iohns of Ierusalem'. It also seems to show the course of Stonebridge Brook to the north of St Ann's Road and, worryingly, a pond bang in the middle of the Gardens (where has it gone?)

The pond was roughly where Sainsbury's is today and was fed by Hermitage Brook. The Brook was culverted and still flows undergroud today. Once the brook was culverted the pond naturally drained. Further north the culverting of Stonebridge Brook was less successful and regularly caused flooding of Green Lanes,  Harringay Gardens and surrounding low lying roads. For more about Haringey's lost streams and rivers, read:

St Ann's Road was also known as Hangar Lane for much of its history.

I added what I could find out about the area now covered by the Gardens to one of my History of Harringay articles on Wikipedia.

Comment by pamish on June 6, 2011 at 0:14
If you like the map, or want a closer look, Bruce Castle Museum has print copies for sale.

Took me a while to suss out what was where - South being at the top!

Is the Bruce Castle Museum version the entire map?  I've just found a b/w image of the Western section of this which is cut off the above image (and looks to have the top end of Hornsey on it)

Comment by Hugh on June 6, 2011 at 11:11
Yes, the map at BC is the entire map as you've linked to. It doesn't show Hornsey. The more westerly bits are still Tottenham. If I had a scanner big enough I'd happily scan my copy in. Its large size is why I've only ever posted an excerpt of it previously.

Thanks for the further detail Hugh - I was confused that the 1619 still marks the land as belonging to the Knights of St John after the dissolution.

But the lingering 'publicness' of the land is arguably present in the development of parts as 1) a hospital, 2) an arena (of old) and 3) a public housing estate (which is what the Gardens originally appears to have been). It's also interesting that it's right on the borders of this land that 'Hangers Greene' (and lane) was located (I came across a couple of references to the use for hangings of this corner of land, later incorporated as former 'wasteland' by the Chestnuts owners into their grounds; naturally I've now lost the references).

Comment by linka on June 6, 2011 at 11:51
(though I've now read your footnote on 'Hanger' which suggests the above could be a folkloric fill-in!)

Right, for the sake of completeness, those two references:

There's a great description of Riddell in the lodge in the reminiscences of Wemyss Reid:

"She and her husband lived in a rambling old house in the Green Lanes, Tottenham. Here she entertained many of the notable men of letters of her time, and here I had the pleasure of making the acquaintance of not a few of them. The establishment was a somewhat primitive one. The workshop in which Mr. Riddell carried on the manufacture of his patent stoves was at the back of the house, and a rather large central hall, dividing the dining-room and the drawing-room, was used as a kind of show-room in which choice specimens of Mr. Riddell’s wares were displayed. The special feature of these patent stoves was that they were ornamental as well as useful. They were made to look like anything but what they were. One stove appeared in the guise of a table, richly ornamented in cast-iron; another was a vase; a third a structure like an altar, and so forth. But whatever their appearance might be, they all were stoves. One winter’s night, when there was an inch of snow on the ground, I went out to the Green Lanes to attend one of Mrs. Riddell’s literary parties. It was bitterly cold, and one of the stoves in the hall had been lighted for the comfort of the guests. We were a merry company, including, if I remember aright, George Augustus Sala, and some other well-known journalists.  In the course of the evening Mrs. Riddell asked a well-known barrister, who at that time dabbled a little in literature, and who has since risen to fame and to a knighthood, to favour us with a song. He was an innocent young man in those days, and tried to excuse himself. “Now, Mr. C----,” said Mrs. Riddell, “I know you have brought some music with you, so you must get it and do as I wish.” The young man admitted that he had brought music, and blushingly retired to the hall in quest of it. Suddenly, those of us who were standing near the door heard a groan of anguish, and, looking out, we saw Mr. C---- holding in one hand the charred remains of a roll of music, and in the other the remnants of what had once been an excellent overcoat.  He had laid his coat, when he arrived, on what was apparently a hall table. Unluckily for him, it happened to be the patent stove that had been lighted that evening to cheer and warm us when we escaped from the storm outside. I draw a veil over the subsequent proceedings."

Back to Hangers Greene, the history of Chestnuts as outlined in the Council Park management plan 2008-2012 says the following:

"The owner of The Chestnuts, Mrs Haynes applied to the vestry in 1880 for permission to enclose the ‘waste land’ at the corner of Black Boy Lane and St Ann’s Road, including realigning the intersection to 90 degrees. It was probably carried out some years later, after 1896."

So that's the end of the mysterious Hangers Greene, I guess.

Linka- re your point about dissolution under Henry VIII, this snippet (no idea how reliable) might hint at why the Knights Hospitaller owned the land in 1619:

On the accession of Queen Mary there was a brief revival of the order, by patent of 2 April, 1557. This revival was of special interest in Northamptonshire, for Sir Thomas Tresham, of Rushton, was appointed grand prior of St. John Angliæ.