It's amazing how many different names are used to describe the neighbourhood that's situated on both sides of the stretch of Green Lanes between Finsbury Park and Turnpike Lane. It's variously called:

So which is right and how in hell's name did we get to be blessed with so many different names?

In 2004, when I first started searching on the web for an answer to what the difference is between Harringay and Haringey, it was almost impossible to find an answer.

In the intervening years I've tried to put that right and have added a number of web articles, both short and long, on the difference. To keep it simple Harringay is the neighbourhood, Haringey is the borough. I gave the short version of what's behind the difference in an article I wrote for h2g2 (originally part of the BBC):

Harringay developed in the late Victorian era as London expanded into the countryside to the north of Islington. It took its name from Harringay House, the grounds of which occupied most of the area between Green Lanes and the Great Northern Railway, from Finsbury Park to Turnpike Lane.

The name Harringay came from the Saxon, Haering's Hege — the enclosure of Haering's people. During the following several hundred years, spellings were rarely fixed and the name went through 162 recorded variations. The Harringay variant was first recorded in 1569. The variant for the nearby area of Hornsey appeared in 1646. But oldest of all, Haringey, was first recorded in 1387.

The choice of the Harringay spelling in 1792 by Edward Gray, the builder of Harringay House, led to this variant being bequeathed to the neighbourhood that developed in Victorian times and to its survival as the proper name for the area today. The spelling's survival was not always safe however. In the early 20th Century the Municipal Borough of Hornsey tried to enforce use of the Haringey spelling. It was only resistance by local residents that prevented its adoption.

In 1965 local government in London was re-organised, and a new borough was created by combining Hornsey, Wood Green and Tottenham. (Harringay had been split between Hornsey and Tottenham). At this point the descendants of the early burghers of Hornsey got their revenge on the former residents of Harringay and chose the name Haringey for the new borough. Whilst there's no record about why they chose that spelling it's likely that they went for the oldest recorded form.

You can read the full article here and a more detailed explanation in one of my many Wikipedia articles on Harringay.

Back in 2007, when I started HoL, I worked up a map of Harringay with the early hundred or so members. You can't draw bold lines to describe London neighbourhoods since people will always have different notions. None is wrong. Our neighbourhoods are where we think they are. So the map, shown below, doesn't claim to give the definitive answer to where Harringay's boundaries are. What this map does represent however is both a historically derived and a shared contemporary view of what most people who know the area agree is Harringay. Since I'm interested in neighbourhoods defined by personal notions, the map is most certainly not a respecter of often arbitrarily drawn administrative boundaries, be they by the electoral Commission, the local council or the Post Office.

It took four years between 2008 and 2012 to get Harringay on Google Maps and in the right place.

Here's where Harringay's four districts or sub-neighbourhoods map on: 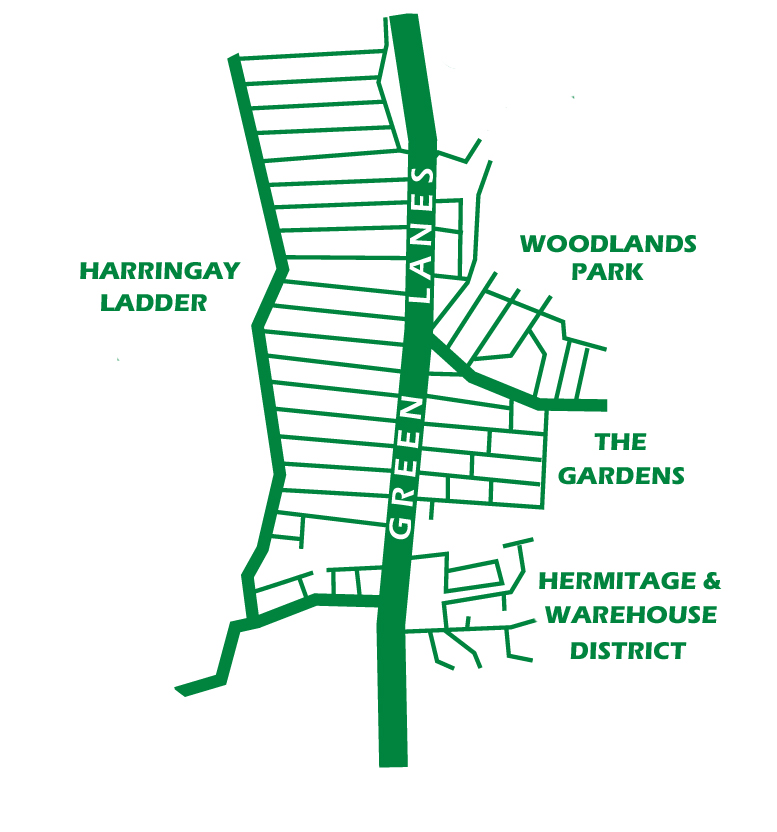 As if the spelling issue wasn't puzzling enough, even once people have that one straight in their minds, there's still more confusion. Between them the Council and British Rail have done a great job of ensuring that people are mixed up about the name of the area.

There's a split as to whether it should be called Harringay, Harringay Green Lanes or Green Lanes. The Council have been muddying the waters ever since they chose a new name for the borough in 1965. It sometimes seems that they've been jealously guarding the name they appropriated and, for Harringay, encouraging the use of any name apart from the one the neighbourhood grew up with.

British Rail haven't helped either. Rail and underground stations are key markers for people finding their way around London and people commonly (and reasonably) assume that a railway station bears the name of the area in which it's based.

The station in the west of Harringay isn't really an issue in the Harringay confusion stakes. It started life in 1885 as Harringay and has kept the same name except for a twenty year period between 1951 and 1971 when it was called Harringay West. So far so good.

The most recent change is probably responsible for both the Harringay Green Lanes and Green Lanes epithets used by some to refer to the neighbourhood.

We can thank God for whoever is responsible for the road signs. Approach Harringay from any direction and you'll confidently be directed towards 'Harringay'. I'm assuming that TfL is reponsible for this. Good old TfL.

So what's the most commonly used term? In 2012 I conducted an exercise to take the temperature of what local people call their area. Harringay, the area's original and historically accurate name came out tops. The full results and how the study was undertaken can be seen here.

A satirical piece about how nonsensical is this situation that the Council has encouraged is here.

PS: You may also see 'Harringey' and 'Haringay'. Don't worry about those; they're just simple spelling mistakes. Who can blame people for being confused though!