This is the last of my three posts about Wood Green's Victorian Factories, occasioned by my curiosity about the vague outlines currently available for most of Wood Green's vanished industrial heritage.

For a few years now I've come across mentions of a piano factory in Wood Green that was bought by Barratt's when they first set up their confectionery factory. When I started to try and find out a bit more about it I read that it was the Allsopp factory, but there was no further information about it. By digging deeper, I've finally been able to unmask the true identity of the factory. It was in fact Henry A Ivory & Co.*

Ivory's was run by Henry Allsopp Ivory. Born in 1825, he married Eliza in 1848 or 1849 and soon after their first daughter was born. By 1851, Henry was living with his wife, his sister and two daughters at 52 College Place in Camden.

By all accounts he quickly made his way into the piano manufacturing business. But, the road, it seems was a bumpy one. By 1858, when he was 33 years old, he was winding up a piano making business he'd been running along with partners in Store Street, just round the corner from where Heals is today.

Three years later, it looks like he may have been beginning to prosper and had moved up the way to 275 Euston Road where he had partnered with former music teacher William Prangley and was trading as Ivory & Prangley. He was described in the census of that year as a "piano forte maker employing 14 men and 3 boys". In 1862, the firm was exhibiting at the International Exhibition, held on the site that now houses museums including the Natural History Museum and the Science Museum. 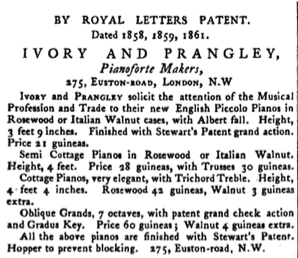 Then, in 1868, ten years after his first firm had closed, Ivory & Prangley folded.

Before long he had moved to Wood Green with his family.  By 1871 Henry he was recorded as living in Mayes Villas in a terrace of houses on Mayes Road. With him were his wife Eliza, three daughters, three sons and his brother. The youngest boy was 7. His eldest daughter was now 22.

Just behind his house he had either built or acquired a factory and he was trading as Henry A Ivory & Co. (also known as H A Ivory & Co.).

In 1873 Ivory was one of the few British piano makers at the Vienna Universal Exhibition. The official Austrian report said "The manufactory of Ivory & Co sent three pianinos, among them one with emroidery". 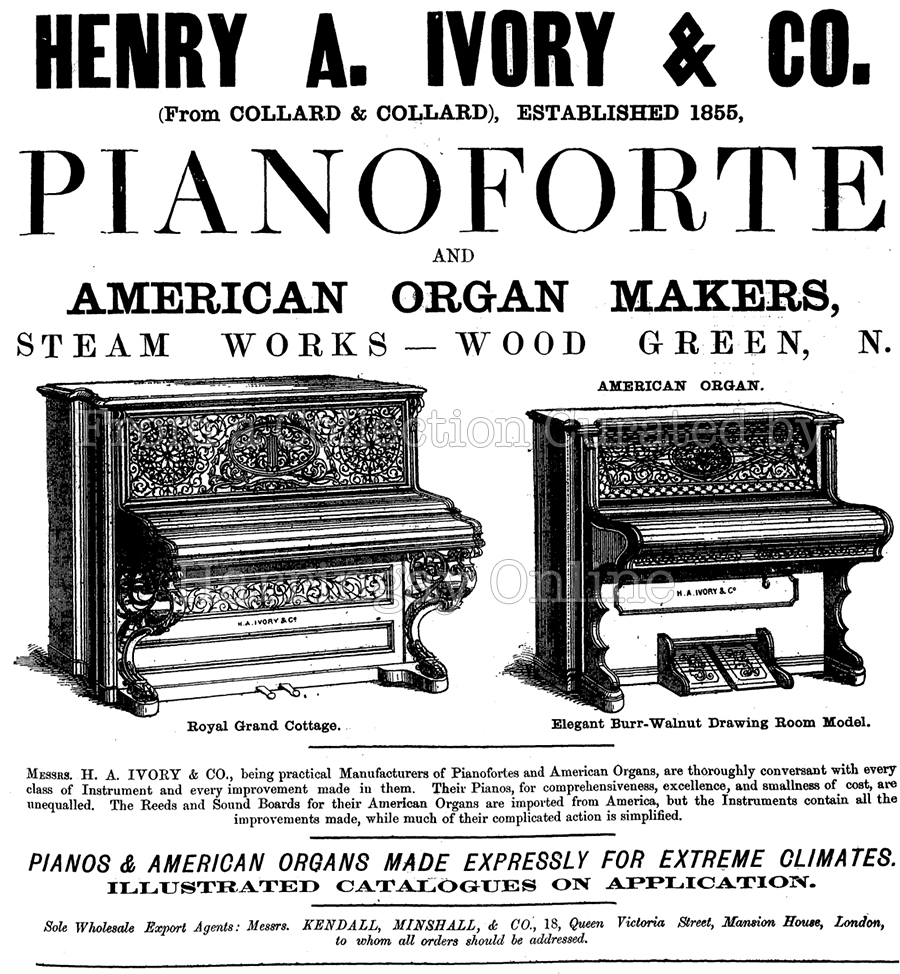 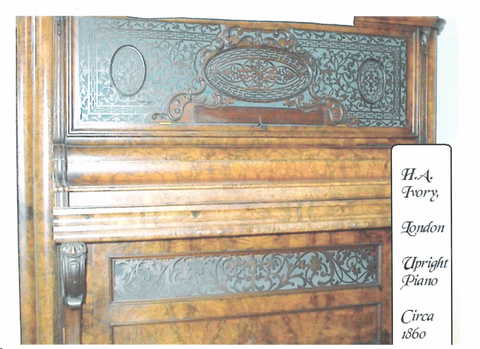 A more contemporary photo which looks like it shows
the 'Royal Grand Cottage' shown in the 1877 advert.

Ivory continued in business in Wood Green until the end of the decade. The last we hear from him in Wood Green was in an advert placed in 1880. In the same year he sold his premises to Barratt's confectioners who went on to grow one the the 20th Century's biggest and best known sweet manufacturers.

Perhaps it was ill health that occasioned the sale since Ivory died just four years later living at Fasset Square in Dalston, aged 59.

*The 'A' in 'Henry A Ivory & Co' stands for Allsopp. It was often written as "Ivory, Henry Allsopp". As seems so often to be the case, one historian made a mistake and decided that Allsopp was the owener's surname. This mistake was copied time and again, by respected historians and by the local council until it became an established 'fact'.

**The patent referred to in the advertisement was apparently for a device invented by music professor William Prangley to improve the third finger. So much time and money was spent on securing this patent that Prangley went bankrupt in 1859. Described in court reports at the time as a "music seller", he was then based in Salisbury.

*** The link with the much better known Collard and Collard seems to be explained ny an 1860 advert Hnery took out in the Bucks Advertiser & Aylesbury News, 1 December 1860: