More likely to be heard from a bedroom window than seen given the cloudy and chilly forecast as well as the time. It's the 'Valentine's White Rose' to York, which two years ago was the last steam excursion to pass us for sixteen months. Locomotive is, as then, the maroon 'Duchess of Sutherland'.

Friday 22 April mid-morning: 'The Great Britain XIV', a nine-day steam-hauled tour taking in Edinburgh, Inverness, Cardiff and Penzance. 'Duchess of Sutherland' is booked for the starting leg from Kings Cross.

Thursday 19 May 26 May about 0840 at Harringay Green Lanes: 'Mayflower' the apple green locomotive hauling an outing to Bath. Details here.  EDIT 20/05: this will now run diesel-hauled instead, as far as West London where the steamer attaches. Sorry to raise hopes, this is a late change to the plans.

Thursday 2 June about 0820: not steam, but on one of the Platinum Jubilee Bank Holidays this train is travelling to Norfolk as part of a visit to Sandringham, and is likely to be hauled by by the two specially-liveried diesel locomotives which are allocated to the Royal Train.

Hi Gordon, thanks for posting this. I am new to Harringay for steam train watching - any recommendations for the best place to watch?

The footbridge at the station.  Perfect view.  And thanks, Gordon.

Most people watch from the station platforms: on Platform 1 (southbound) you see the train from further away, on Platform 2 it's up close and personal. The Oxford Road footbridge into the side of Finsbury Park is also a viewing point though not as distant a view. I've never found station staff (who seem to be Mon - Fri only anyway) to question why you're there.

It was about five minutes late, which improved the daylight level a little. Despite the early hour, at least half a dozen watchers. 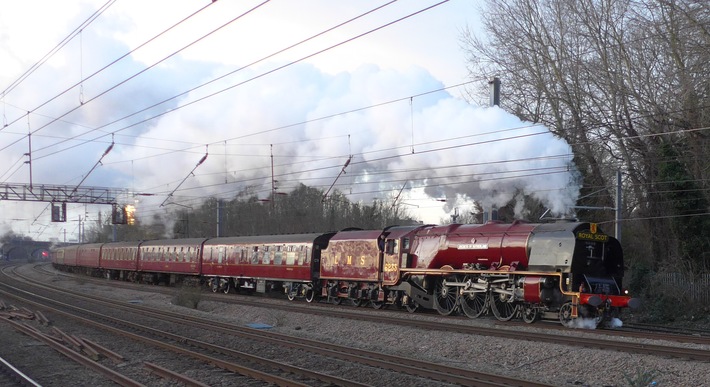 Hi Richard - right colour, but on a different locomotive. The pointy coupling on the front tells me it was made by Tri-ang, and it's a GWR Castle class loco - I know because I also had one, though made by Hornby-Dublo in a slightly larger size or 'gauge'.

It and the rest of my collection went as a fund-raising donation to a colleague who was running the restoration of the real steam engine 'Camelot' which runs on the Bluebell Railway. So I might have funded restoring the whistle, or something!

Yours is missing the nameplate over the centre driving wheels - it would very likely have read 'Windsor Castle' which is significant because the real one was used as the Royal Train loco on the Great Western Railway. And a bit more, in this Jubilee year: when the King died in 1952, 'Windsor Castle' was under repair, so its number and name were transferred to a different locomotive which took the King's body to Windsor. Thereafter the change remained.