I have asked the Green Flag Award scheme that the award for Finsbury Park be suspended for the duration of the concerts. While these events are happening then it is not the same park that deserves the award.

Have a read of the info for Finsbury Park on GFA website http://www.greenflagaward.org/park-summary/?ParkID=373

I believe this claim is not true today.

'… Finsbury Park … offers a peaceful green retreat in a dense urban environment. The grade II listed park … continues to evoke its undoubted value as a ‘People’s Park’. … Finsbury Park is looking better than ever, … '

If you share my concerns then please email greenflagawards@keepbritaintidy.org to let them know.

As a resident of the London Borough of Haringey and user of Finsbury Park I ask that because the concerts taking place in the park this summer so restrict public use and enjoyment that you suspend the Green Flag Award for the duration of the commercial occupation.

I have attached some photographs to show you how Finsbury Park is looking today with high security fencing having turned the 'people's park' into a fortress for the Wireless Festival.

If you were to walk around the park then you would not have the same experience as your judges had when deciding whether to confer a Green Flag Award.

Large sections of the park are off-limits to the usual public users. This includes the sloping hill and the open green space along the Seven Sisters Road side of the park. This is the space where your judge might have seen people playing sport or simply relaxing on the grass. Or, simply admired the view.

The children's playground is surrounded by high security fencing. I spoke with one parent who commented that his children had spoken about the difference it makes to the facility.

The rocks play area is within the hired-out area.

The view from the cafe is of the high security fencing.

So much of the park is under commercial occupation that the flagpole flying 'your' Green Flag Award is actually positioned inside the event security fencing. Yes; Haringey Council will sell the 'battle honours' of Finsbury Park.

After the events are finished - 11th July - I ask that you undertake an immediate re-judging of the park to ensure that it is in the fit condition to continue to have a Green Flag Award.

But for the duration of the events you have to send a message to Haringey Council that they can't expect to being allowed to parade your award while hiring a third (approximately) of the park to concert events that exclude park users.

They are fraudulently flying the Green Flag Award - as I said, behind the fortress fencing - claiming to be providing a beautiful park for people, but pursing an aggressive marketing policy of selling-off exclusive access to the very same park.

I am happy to discuss my concerns and invite you to visit to judge for yourself how for the period of these commercial events that Haringey Council are not worthy of having a Green Flag Award for Finsbury Park while the commercial events are taking place.

PS I live in the Tottenham Hale area of the borough and Chair the Friends of Down Lane Park organisation. This park has recently been awarded the Green Flag Award and our current occupation is that of contractors making significant improvements to the park as a resource for all the community on a non-exclusive basis.

Well done Martin. Here's what the Green Park award scheme have to say about our park. Some of it reads as irony. If these awards are being handed out to every park, or nearly every park, regardless of subsequent conduct, then the scheme will fall into disrepute. 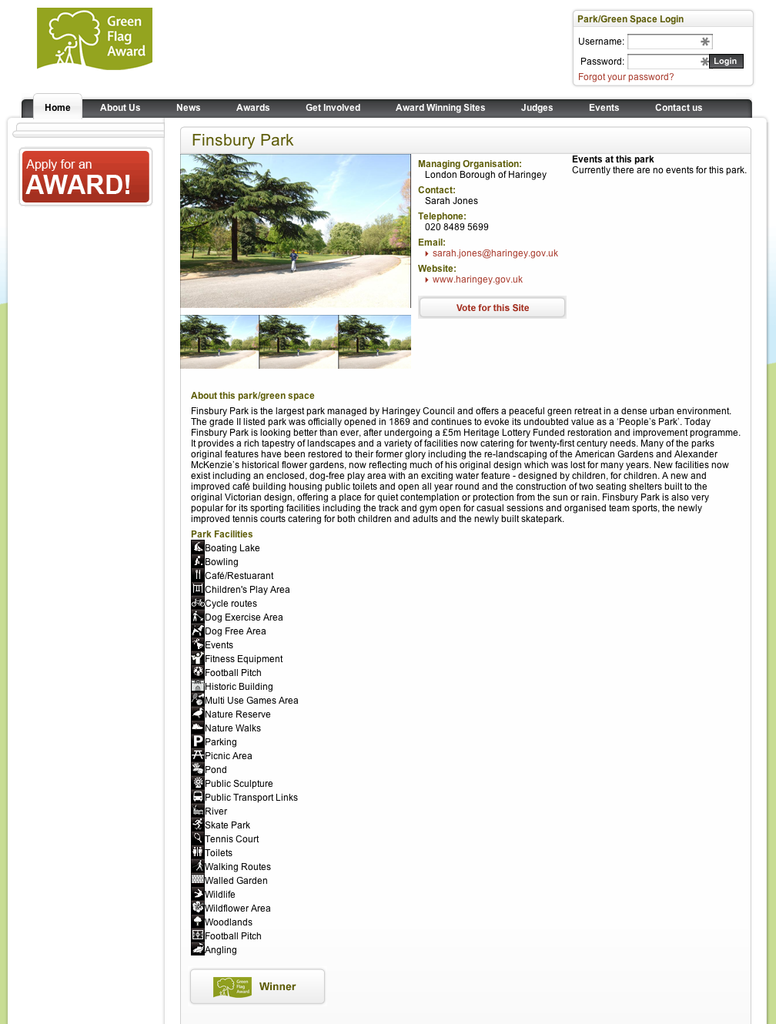 On 2nd July I received a response from the manager of the Green Flag Award scheme.

Thank you for your email and the information regarding the event in Finsbury Park.

A Green Flag Award is held for 12 months and is subject to an annual assessment by our team of assessors. Many of our winning sites hold events throughout the year which form part of a park’s offer and we accept that during these events access to parts of the site may be restricted. We would only suspended a flag if we believe a park has fallen below the standard we expect.

The management of events is contained within Finsbury Park’s management plan and therefore formed part of our assessment. Having consulted with our judge I can confirm that events were discussed during the assessment as event preparation was taking place during the judging visit.

Thanks for passing on this information Martin. I will consider writing to Mr Todd myself, to make it clear that you are not alone with 'your' concerns.

Good idea, I've just written to them too.

Thanks Martin, well done for highlighting this issue