Pioneering Cartoons Made in 1940s Harringay

Back in 2008, I posted an old piece of newsreel about a pioneering film studio based in Harringay in the 1940's.

Making some of the UK's first colour cartoons, the studio for British Animated Productions was in what is now the Kurdish Centre in the Gardens.

The driving force behind the project was American-born George Moreno Jr., who settled in England, probably followng some war service here. The studios were a bold attempt at creating homegrown Technicolor cartoons for British cinemas. To begin with the studios saw real success with a series of five cartoons about a couple of characters called Bubble & Squeak. Mr. Bubble was a geeky taxi driver, and Squeak his sentient car. The cartoons were popular enough to spawn a series of children's annuals. 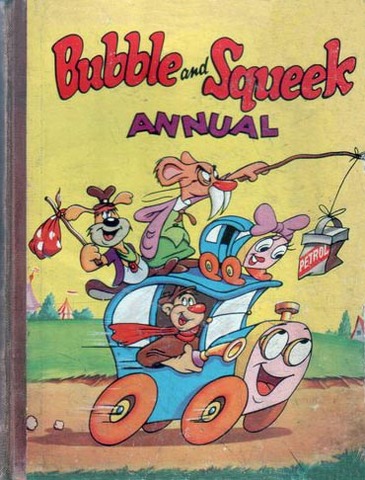 The studios opened in Harringay in 1947 and were listed in the 1949 Kinematograph Directory as being based at Hawker House, Portland Gardens, Harringay N4 (now the Kurdish Centre). 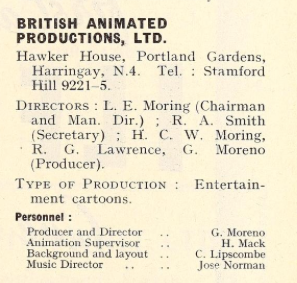 By 1950, the studio output seems to have dwindled and the businesss folded shortly after as the lifting of wartime restrictions on foreign products saw market flooded with cheap American-made cartoons.

Here are Bubble & Squeak in Funfair:

If you or your wee ones have had your appetite whetted, you can watch the whole series via our playlist through the embedded video above - they will run one after the other.

Read all about the history of the building where this business was based here.

British Animated Productions employed over 20 people to work on the cartoon series. Some were ex-servicemen, some were local and some, hired because of previous experience, may have moved into the area to be close to their workplace.

Below is a list of known employees, grouped roughly by date of hiring -- the first group  was recruited in June 1946 when the studio first opened, a few more at the start of 1947 and a further recruitment drive occurred in June 1947, mainly for more trace-and-paint staff (who copied the animators' drawings on the acetate sheets known as cels).

Does anyone know of any of these people? I am interested in the history of British Animated Productions.

Thanks, Peter. May I ask what drives your interest? Thanks

I worked for George Moreno for 6 months at Moreno Cartoons and then for Fred Thompson for 15 years. Now, in my retirement, I'm working on a database of British Animation (http://s200354603.websitehome.co.uk/) -- and wish I'd thought to ask more (indeed, any) questions about their past!

So, I take it then that your list of employees came from company records?