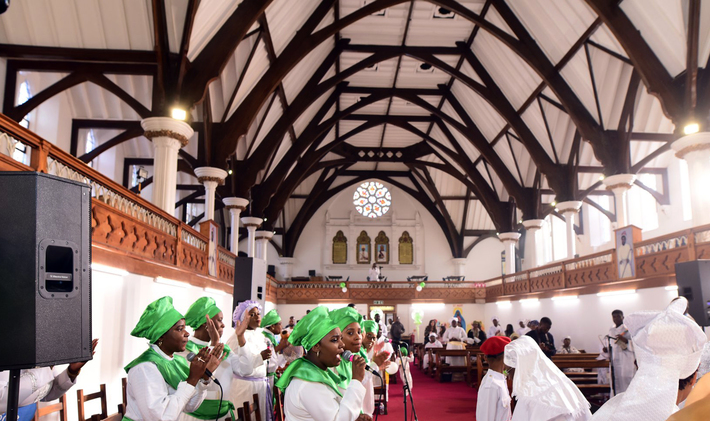 I recently wrote a piece on HoL about the history of Haringey Park, That included mention of Park Chapel which overlooks the west end of the road. In researching that piece, I learned that in 1974 the congregational church which had built and occupied the building since 1855 joined with Ferme Park Baptist Church to form Union Church, Crouch End. They moved to the newly built church on the corner of Weston Park and Ferme Park.

Following that change, the Park Chapel building was split in two. It is well-known that half was eventually bought by Dave Stewart of the Eurythmics and was used in the recording of the hit album Sweet Dreams. But I hadn't realised that the southern half of the building continued in use as a church. Today is is occupied as the Mount Zion Cathedral.

From what I can see, it is a church used by Londoners of African descent. The Local Prayers website offers the following.

Cherubim and Seraphim church based in Crouch end hornsey. Working to the glory of God.

Eternal Sacred Order of Cherubim and Seraphim church is a registered charity whose principal aim is to promote and advance Christian Fellowship. Provision of Christian literature in relation to the Holy Bible, support families facing hardship, offer holiday and recreation for children and families of all races and sexes.

Mission: The promotion and advancement of inter nation Christian fellowship and specially the principles relating to the Holy Bible.

In 2004 the studio half of the building was sold to music artist David Gray. In 2013, Gray decided to sell and the Church seemed under threat of falling into the hands of property developers. As things turned out, UK Producer Paul Epworth was on the hunt for a studio facility and a sale was agreed in October 2013.

More about the history of the building here.

I remember working in there when the upstairs was derelict apart from theatre props scattered around, including a life-size manakin of a knight which scared the s___ out of me!, the numbers for the last hymns to be sung were still on display, Hardwick and Bura were working on the model of Camberwick Green downstairs. There was also a trapdoor that gave access to the offices above the adjacent shops. The BT van park and linemens room were built on the cemetery at the rear, not sure if that would explain the phantom page turner often heard moving paper timesheets around in the afternoon.