Spurred on by the suggestion of using the Green Lanes regeneration as the opportunity for getting some wider traffic improvements made on the Ladder, and with the idea of chipping away at the problems one at a time, here is a proposal which would almost completely eliminate non-residential through traffic from all of the northern Ladder roads.

The north of the Ladder are the five streets Frobisher, Lausanne, Hampden, Raleigh, and Sydney, along with Wiloughby Rd and Duckets Common. This is an area of similar size to the Harringay Gardens, which gets a lot of car and truck traffic travelling through as a short cut and not stopping in the area.

Here is a single small, simple, and cheap fix that would almost completely eliminate all of that through traffic: 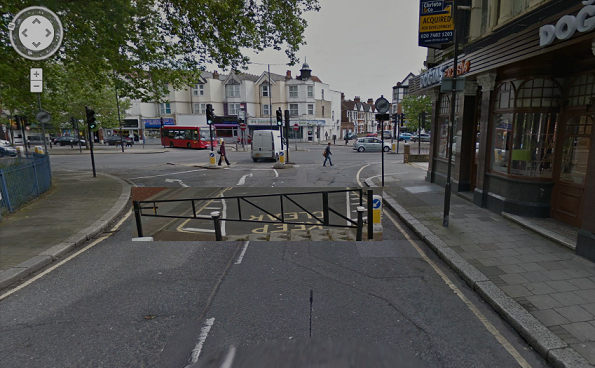 Installing a gate preventing traffic entering or exiting from Frobisher Rd to Green Lanes (also see red  circle on the map at the bottom for the location).

Along with eliminating the through traffic on the residential streets it would also eliminate that traffic from the streets along two sides of Ducketts Common giving a dramatic improvement to the quality of one of Harringay's few green spaces. But wait, there's more, if all that isn't enough this would also relieve congestion at the busy Green Lanes / Alfoxton / Frobisher intersection allowing the traffic there to flow more smoothly.

An initial reaction might be to think this traffic must just get displaced onto other Ladder roads, but no not really, most would get displaced onto Turnpike Lane and Green Lanes, "A" roads which is where that through traffic is supposed to be anyway, not on residential streets.

There is a possibility some of the East bound traffic coming from West Green Rd might still be tempted to detour via Falkland Rd. The solution to that is to switch the direction of Falkland Rd, which would make the detour not worth it and the traffic would instead go up Green Lanes and left onto Turnpike Lane, which is exactly where we want it. The Falkland Rd residents already want their direction changed anyway, and, if the Hewit Rd change goes ahead then this Falkland switch will aid that by adding another West-to-East road to share the Hewit traffic. So win win win all around!

What do you say, how about it?

Update: Instead of the Falkland direction change (crossed out above) it turns out that a better solution for this and Falkland Rd is to have a No Right Turn in to it from Green Lanes, see here for more. 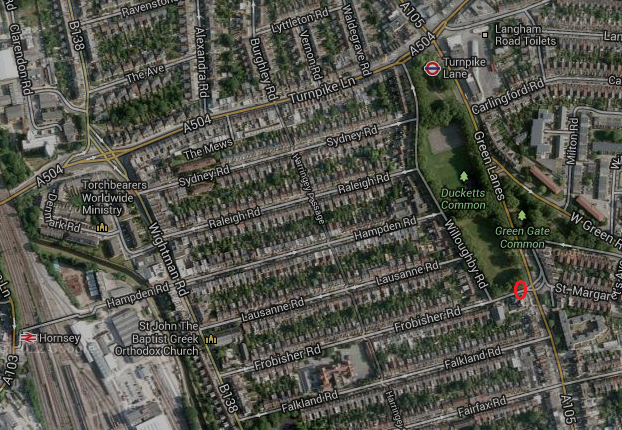 Permalink Reply by matthew cuthbert on June 18, 2013 at 11:57
I've gone to see how children and parents navigate this mess of a junction on a few occasions in the morning, crossing to get to school, and it was raised at a HRRA meeting and consequently to local ward councilors, it's accident prone and pedestrian hostile, I hope they get it right, Wood Green junction got a lot of attention, with a header from Oxford Circus's Tokyo inspired pedestrian crossings.
The barriers from Dogtas car park encroach right up to the footpaths edge from when it was a beer garden,
this obscures the view of pedestrians from Frobisher Rd traffic as well as making it congested for foot traffic,
when you want to cross the junction, plus allow for push chairs and those wanting to turn right and left on this corner,
the barrier or low wall also tapers the footpath at the junction along Green Lanes.
The wall should be partly removed or set back.

I would have thought a table top or raised section of road, at the junction should be a transition for cars to slow,
for a pedestrian friendly crossing at Frobisher Rd, together with a southern park entrance for a path that continues the length of the park, along the East side of Duckets Common, which I enjoy walking along towards Turnpike Lane and Wood Green, when I can get off the immediate footpath, which is grim from car noise and fumes.

Stan, I've already said on the other thread that the suggestion to reverse the traffic did not come from the residents of Hewit Road. Whilst the residents welcome suggestions that will ensure the success of the Alison-Salisbury piazza and pocket park as well as sharing the burden of traffic more evenly across the Ladder, the current reversal suggestion came from the Council. I understand that this fact has been confirmed by the Council to the LCSP.

Wightman Road is part of the Ladder.

Hear Hear!  Indeed, John, I'm moved to wonder whether four of those roads (Lausanne, Hampden, Raleigh and Sydney) have any real claim to being Ladder Rungs at all, so severed are they from any contact with Green Lanes and so tenuous is their dovetailing with that contorted dog's hind leg that is Willoughby.

You're right of course. Sorry. If the proposal doesn't get shot down in flames for being completely misguided then I'll happily reword it to correct that.

I'm no expert on traffic on the ladder (live in Hornsey) but your idea (or similar) sounds like the sort of thing Hackney Council would do at the drop of a hat - shame Haringey might need a bit a lot more coaxing... http://cycleandwalkhackney.blogspot.co.uk/2013/03/cycling-and-walki...

I'm not in favour of any more gating-off of small areas - the Gardens closure had a huge and negative impact on the rest of our local streets and I'm still annoyed about it. Traffic policy needs to address the whole area, not nibble away at sections and push the problem elsewhere.

It's worth noting that the 'Northern Ladder' in not within the boundaries of the Green Lanes regeneration scheme and therefore I'm unsure of what plans, if any, the council has for this area (it doesn't appear to be included in the Wood Green scheme either). I do recall reading somewhere of a proposal to realign the Alfoxton/Green Lanes/Frobisher junction.

As a Falkland Road resident, I am broadly supportive of this proposal provided a traffic study is undertaken prior to any changes being made and proper analysis during a set trial period (this might just amount to a traffic count). All results should be published and a commitment made to reversing the closure if there is a disproportionate increase in traffic to the surrounding Ladder roads.

Falkland Road has both Fairland Park and North Harringay Primary School and ought to be a quiet road but it receives more than its fair share of traffic. It is the first road on the Ladder which has direct access to Wightman Road for drivers travelling down Green Lanes, and it also gets a lot of the traffic coming east from West Green Road. It also has its fair share of lorries and is the black cab road of choice.

Trialling a reversal of traffic flow on Falkland road with or without this proposal could be a good idea for the reasons mentioned above. It should be noted though that it would be the first road travelling down WIghtman with direct access to Green Lanes if the traffic were reversed. There is potential that the displaced traffic could then funnel down Falkland that would otherwise have used the 'Northern Ladder' roads, but it could also be shared with Fairfax Road which I assume would remain as is. I'll give this more thought, but why not if chipping away is the only way.

Ant, all you need to do is shut Wightman Rd off at both ends. There is no reason for traffic to use the ladder as a shortcut other than to avoid traffic lights and congestion. You will not displace this anywhere other than on the A roads leading to the ladder. There is not a single journey you can make that if you take a shortcut through the ladder it is physically shorter, it's just a way for the council to hide traffic in our residential streets.

One issue that would have to be looked at is the no right turn from Turnpike Lane into Hornsey Park Rd but if there was no traffic coming from Wightman Road then I guess that would be simple enough.

Think big, John. Close off all roads that are not bus routes :)

What about stopping buses rat running through residential streets! (Like the W5).