The Council is a service, not ( as it already thinks ) a business.

The £86,000 cost that Sue refers to is the absolute minimum figure that the Labour-run Council could declare several weeks ago. Apart from staff badges and possibly lanyards, it did not include implementation costs. The true, full costs of our "identity rebrand" are likely to be much higher.

LAST week I spotted a new example of the of the re-branding roll-out, that gives an idea of the extent of the implementation.

The administrative headquarters of our Borough is River Park House opposite Wood Green tube station. Inside, on one of the upper floors, a large glass panel near a lift foyer has received identity branding attention. At first glance, it appears as though the 'Haringey' logo is a repeating pattern from one side to the other that is etched into the glazing, but another Councillor believes this to be some kind of decal or appliqué. All custom-made of course.

I haven't yet checked if others of the seven floors have had the same treatment.

That is beyond public gaze of course, but up the road at the Civic Centre, even around the dark back side by the bicycle lock-up cages, brand new signs with the new identity have appeared, where no branding has gone before. This is in plain view.

I don't believe Haringey have ever before engaged in such a comprehensive (and costly) branding.

While mentioning some of this yesterday on Twitter, I received a 'Good Morning Clive' message from the Cabinet Member for Economic Development, Social Inclusion and Sustainability*, who is responsible for the identity re-branding.

When I bade him a good morning I took the opportunity to ask him if the logo 'etching' on glass panels inside River Park House was not extravagant at a time of Council cuts. The Council Cabinet Member fell silent.

I would have been happy to publicise his answer.

*in an earlier post I incorrectly referred to the Councillor responsible as the
Cabinet Member "for Resources". I have now edited (this Cllr. would better
be described as the Cabinet Member for wasting Resources).

where can i buy some wallpaper?

Permalink Reply by Norah Borough on December 13, 2015 at 13:03
No need to shell out. Just borrow a five year old, give the kid a red pen and ask them to repeatedly write 'haringey' on a plain wall.

Evidence that the new brand identity may not be universally popular amongst our Council's own staff, is hinted at in recent Tweets from Tottenham resident Martin Ball.

It would be an irony and regrettable, if the costly identity rebranding whose object in part was to lift staff morale, had an opposite effect.

Hang on @BrokenBarnet There's serious debate over @haringeycouncil logo change. Even in 'Message from Nick' to staff pic.twitter.com/w1u0qdBVx8

My take is that at least some Haringey Council employees have a better sense of taste, value and propriety than their political masters (and mistress).

Thanks Clive for the information about the Haringey logo inside River Park House.  Seems the waste is never ending.
About the Civic Centre signage rebranding, on 7 October I walked from River Park House to the Civic Centre and then around the building. I took photos of each sign I spotted, posting them on Flickr in a set called The £86,000 Logo.  Including one at River Park House and another outside the Youth Offending Service building (next door the Civic Centre) I counted fourteen signs. (Click on the link if you think I'm exaggerating.)
Clive, are you seriously  saying that even more have been added?  I sincerely hope not. Though Cllr JoeGo Logo Goldberg does have a tendency to keep digging ever deeper when he's in a hole. 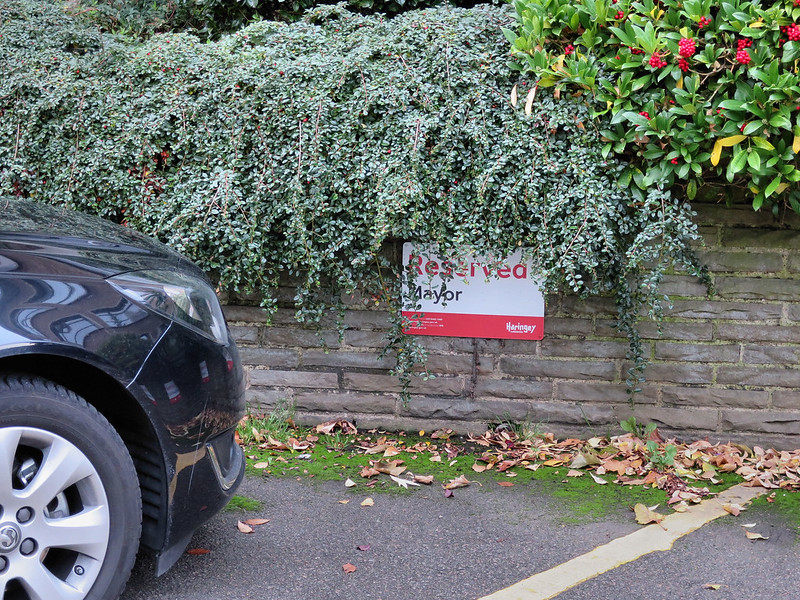 The discreet charm of the Mayoralty.

Thanks for the link Alan; I was unaware of your photo essay ("the £86,000 Logo") of the signs around the Civic Centre. You may well have included the signs at the back to which I referred (I don't want to be accused of double-counting).

Looking back at my original link in September, I saw the then declared breakdown of cost:

A few days after posting the link, I attended the Cabinet Member signing when these figures were presented. Some of the cash had probably already been spent at that point but some expenditure already committed, may not have been reflected in these figures.

"Haringey" identity rubbish trucks were spotted (and photographed) with the big new red logo in the week before the official roll-out. This spending may be the Agripa waste refuse panels, £8,000.

The official roll-out began within days of the signing. The identity rebranding of the website (that would have been costly) appears not included in the above figures.

Clearly there's been significant spending on the identity branding since September, but I'm not sure how accurate these figures were even then.

The true cost, that will eventually surface, is likely to be much more than the £85,936 declared. None of it sits well alongside the Council cuts.

At best the identity refresh is vain, mistimed and misguided, at worst … words fail.

Permalink Reply by Antoinette on December 22, 2015 at 9:48
I thought the Internet site was managed internally therefore just staff costs involved