How Woodberry Down Got its Name (and maybe Manor House too)

Till relatively recently I'd always thought that Woodberry Down was a council confection to sugar the pill of a fairly brutal looking council estate. It doesn't take much rooting around to discover that this was a very incorrect assumption.

In fact, in extreme contrast to its character for the second half of the twentieth century, Woodberry Down was developed as a home to the wealthy. It included some huge houses with gardens stretching from Seven Sisters Road down to the New River. Here's a potted history I added to Wikipedia some years back.

That entry ends explaining the radical change the area experienced about seventy years ago:

With the increasing suburbanisation of the area, mainly for the middle and lower middle classes, many of the original families had moved out by 1895 and others were being replaced by poorer people in 1913. Social decline continued, until in 1954 the district was inhabited mainly by students, foreigners, and the working class, with most houses containing four or five families and all in decay

You'll note that this text is on the entry for Manor House, London, rather than for Woodberry Down. This is another classic London story of 'What's my neighbourhood's name'.

In Victorian times, the area from Manor House Junction, north and south to the New River (as it loops around) and east as far as South Tottenham was widely known as Woodberry Down. After the building of the council estate given the name "Woodberry Down Estate" however, 'Woodberry Down' fell out of fashion as a name for the wider area, the majority of which had been subsumed by the estate anyway.

With the 'regeneration' of the area, Berkley Homes have clearly decided that they like the name and so it is experiencing something of a revival. I was keen to learn if this was just property developer's hype or whether there were any local roots to the name. So I started digging around.

The earliest reference I have to the history of the name so far is from The Survey And Valuation of The Manor of Stoke Newington in 1649. I found the following two excerpts:

One parcel of Pasture Ground, called by the name of Berrie Downs, in the occupation of Mr. Leverett, abutting on Mr. Chace's land on the north, containing by estimation 21 acres, which we value, to be worth per ann. £35.

One parcel of Wood Ground, called by the name of Berrie Down Wood, in the occupation of Colonel Alexander Popham, abutting on the New River on  the north, containing by estimation 5 acres which we value to be worth per ann 35s.

The next reference is from a 1734 map of the demesne lands of Stoke Newington Manor. It shows 'Wood Berry Downs Meadow'. Next to it it shows 'South Berry Meadow' and 'North Berry Meadow'. The common name here obviously was 'Berry'. Fascinatingly for me, ancestry.co.uk seems to think that 'berry' would have referred a 'fortified manor house'. As in many old maps, 'north is not up'. In this case east is at the top of the page.

With regards to the other part of the name, 'down', my understanding is that it refers to an area of rolling, grassy, treeless upland used for grazing.

An 1844 map suggests that a century after the demesne map the wider area had taken on the 'Woodberry Down' name.

So Woodberry Down certainly seems to have authentic local roots. As to 'Manor House', I've always been interested in how tube and train stations get their names. This case has proved the tipping point for me to actually try and get some hard information on this. I asked StephenBln if he could help and within a few hours his network is pointing towards the LU Design & Heritage Manager. So it sounds like we might get closer to an answer. I'm sure that one of us will report back on the findings.

In the meantime however, it seems that whether by intention or accident, London Underground's naming of the tube station as Manor House may not have been far off the historical mark.

See some images of old Woodberry Down here.

And of course, this is a great opportunity to remind you that on 1st May. the London Wildlife Trust is re-opeinung Woodberry Wetlands as an all-singing all-dancing wetlands nature reserve. Information about free opening weekend tours here.

Don't forget that the pub on Seven Sisters Road at Albert Road, now known as No.8, was also known as the Woodberry.

Thanks. I didn't know that.

Once again .. an 1885 shot of the Edmonton Steam Tram seen at the Finsbury Park terminus showing 'Woodbury Town' on the side.. 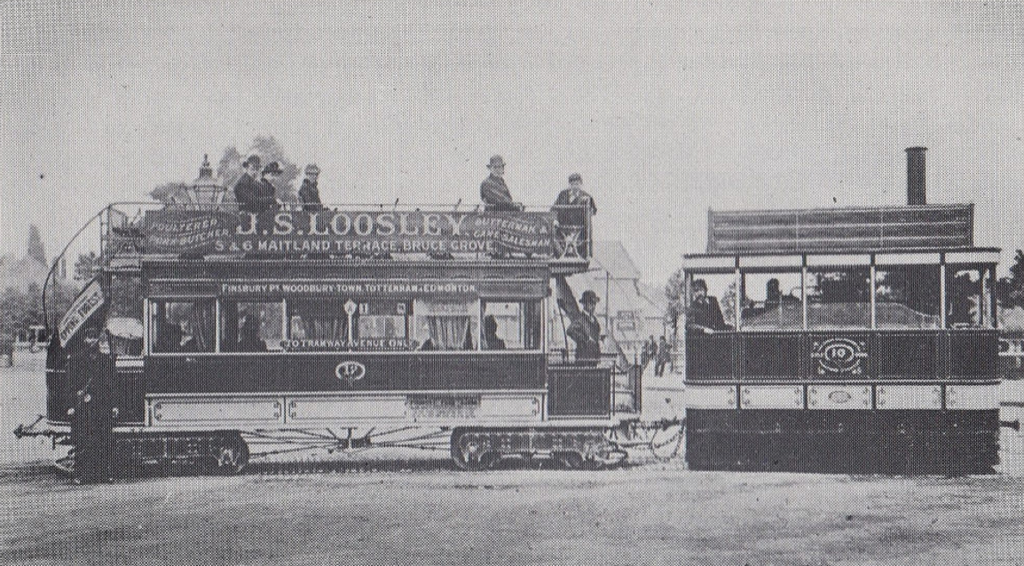 Were Foxtons sponsoring the buses in those days? (And they really are the oddest of contraptions)

Just added a picture of that pub in its heyday.

I'm now thinking that the section of Seven Sisters Road as far as St Ann's Road may have originally been known as Woodbury Town.. Note the name of the pub, now No.8, but not only that, the strectch of  shops between Candler Street & St Ann's Road was always known as the Town when I was kid.. That may still be the case?  I'd always wondered why. But never connected that with Woodbury Town before.

Perhaps when the area was developed in the 1880s, it was known as Woodbury Town and the local pub named after the development. But the Woodbury fell out of use and only the name Town remained.

The entrance to the Steam tram depot, with it's flat roof, can be seen here by  the 'n Si' in Seven Sisters: The brown area behind is where the depot stood until the 1970s. The Tram depot entrance.. I seem to recall that there were remains of track left, even in the early 60s. There was always a Fruit and Veg Barrow there weekdays.. right until the late 1960s. 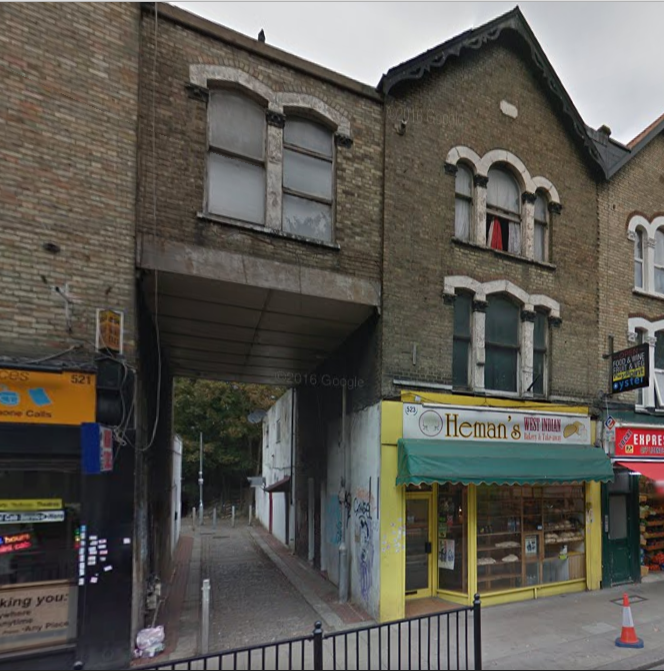 This map might also be of interest. It shows the Horse and Steam tram routes as they were ca.1891. The depot mentioned above on Seven Sisters Road can be seen on the map. All lines were mostly single track operations with passing loops. 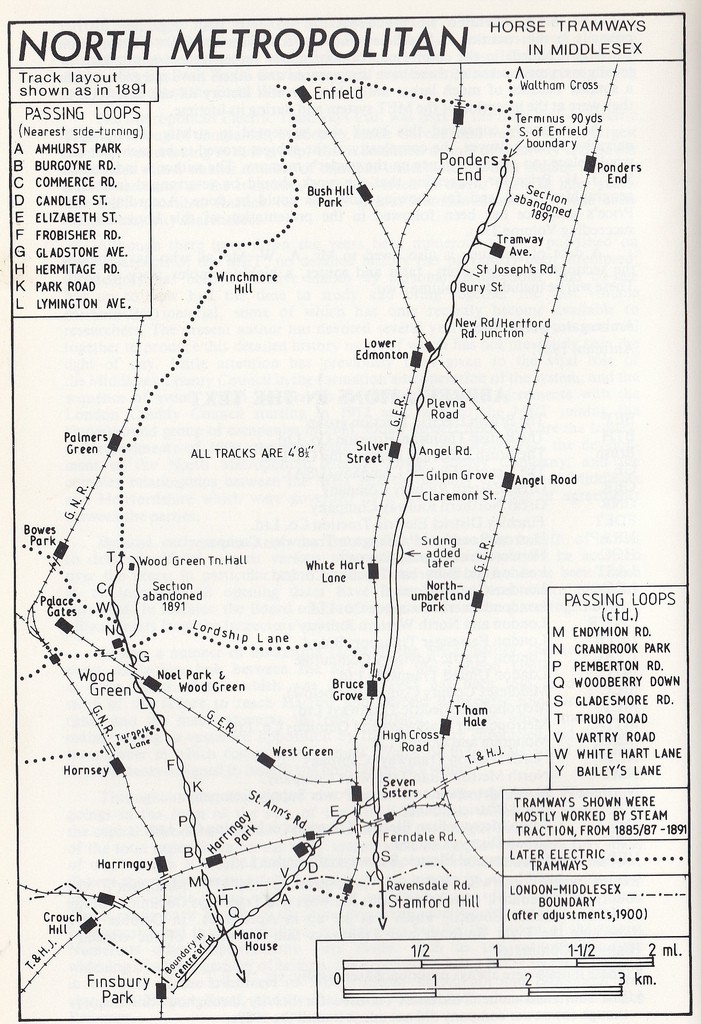 The only two mistakes on the map that I've found so far is that Tottenham Hale station was know as Tottenham Station right up until 1968. Passing loop E is titled Elizabeth Street .. is in fact, Elizabeth Road.

Wow, this is fascinating - I rather like 'Woodberry Town'. Plus, we locals do still refer to No.8 as 'The Woodberry' - it only changed its name a couple of years ago.

Also, I pass that little alleyway en route to work every day but had no idea it was ever a tram depot. These days it mostly seems to serve as an outdoor gallery for street art...

I wish they'd bring that fruit & veg barrow back!

Hey Abster.. do people still call it the Town?

Nope, this is the first time I've heard of it.

HMM.. there was a mention of it on the Tottenham FB page. I'll need to find it.

All I can find online is a single mention of Woodbury Town, Tottenham in The Times of 23 Aug 1890 reporting on a a bankruptcy case.