Friends of Finsbury Park to Mount Legal Challenge to Wireless 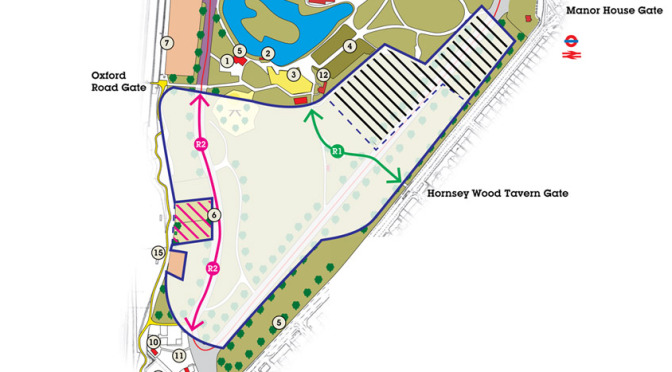 The Friends say of the Wireless Festival, "It is almost impossible to comprehend its vast scale and the impact it has on Finsbury Park. Last year’s Wireless Festival covered almost one third of the size of the Park, surrounded by an oppressive 8ft high green metal barrier to keep Park users out, in some areas stretching as far as the eye could see.

"Many local residents don't have gardens so the park serves as a vital outdoor amenity, and as events such as Wireless Festival take weeks to set up and take down the public is denied access to what should be public space.

Relationships between the Friends group and the Council have long been frosty. But now it appears they are breaking down altogether with meetings being cut short or cancelled and now a legal challenge. A spokesman for the friends group said "We've tried everything to get Haringey Council to enter into discussions with us, but they refuse to listen, stopping all public consultation and ignoring stakeholder groups, local residents and park users".

The group is now launching a legal challenge to stop the Council staging the festival and similar major events in Finsbury Park. I am not clear at this stage what the basis of the legal challenge is, but I'm guessing the clue might well be in a recent statement:

Finsbury Park is a public park that was formed by virtue of the Finsbury Park Act 1857; it is registered as a Grade II Historic Park and Garden and is also Metropolitan Open Land.

The group say they will have to pay up to £35,000 plus VAT for issuing the proceedings and having a one day hearing in the High Court. To raise the required monies, a crowdfunfing page was set up on Monday. As of today the page has attracted over £5,000 funding, about 12% of the total amount they may require.

Alongside the preparations for the legal challenge, the friends group have also lodged an official objection to the festival.

Permalink Reply by Protheroe O'Shea on May 5, 2016 at 23:53
Oi, don't bring Arsenal into this argument. The vast majority of us Gooners are local so we walk.

Permalink Reply by Pat on May 6, 2016 at 7:28
So when I go back from the games, why is there the massive queues outside Arsenal tube and the mass of fans walking to Finsbury Park? Sometime I get the bus and the police will close the road to allow fans to cross Seven Sisters to Finsbury Park station

Permalink Reply by Protheroe O'Shea on May 7, 2016 at 14:17
There are 60,000 + fans. Obviously some will not live locally including the away fans. Arsenal has been here for longer than anyone. You really can't compare the two.

For the record I have nothing against the park being hired out.

Thanks for the link Clive.
It's enormously helpful that Melvin Benn describes the Wireless event as "doing what the government is insisting every single local authority do: to sweat the assets that they have”.

A conversation called Finsbury Park needs your help! is over on Streetlife.

The Friends are very active there, why not ask them to engage here?

Permalink Reply by Antoinette on May 7, 2016 at 14:43
Able but apparently not willing....I've now asked on four occasions for Clive to tell us what happened at the Extraordinary General Meeting which I feel sure he would have attended.... what was the vote, Clive...?

Permalink Reply by Antoinette on May 7, 2016 at 15:46
And how many people does that unanimous vote consist of?

Don't give him too hard a time about the quorum. You only need a half dozen supporters in the Labour Party to become a councillor around here.

Antoinette, I'm afraid that no figure I could supply would ever satisfy you. I'm not sure you've ever had a good word to say about the Friends of Finsbury Park.

I appreciate that you don't agree with their decision to take legal action. That is your opinion and you're entitled to it. However, hectoring by a handful and implacable hostility isn't going to make a difference one way or the other.

The case will be considered by the High Court and the principles involved will first be tested by the Friends of Battersea Park (vis a vis Wandsworth Council and Formula E).

Permalink Reply by Antoinette on May 7, 2016 at 17:41
You were at the meeting...you can't make an educated guess as to the number of people in attendance?