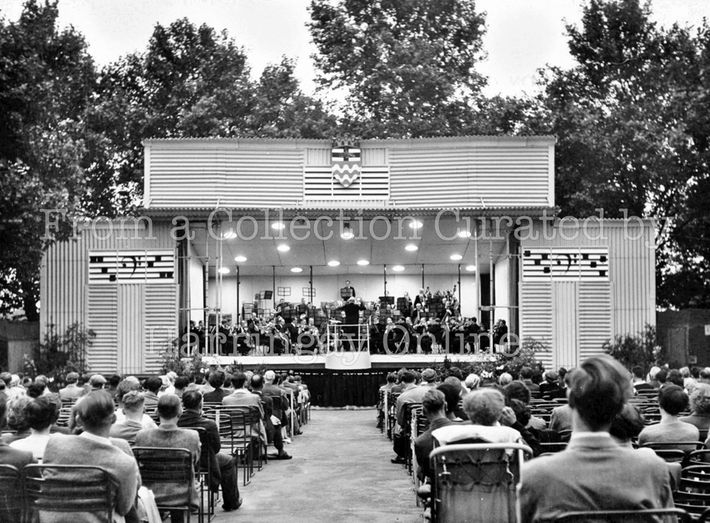 For a brief period from late in the Second World War until the following decade, Finsbury Park boasted an open Air Theatre hosting a surprisingly august set of performers.

Built by the London County Council, the Theatre occupied the space just to the south of the present-day cafe, which in more recent years has been a sort of adventure playground, I believe. 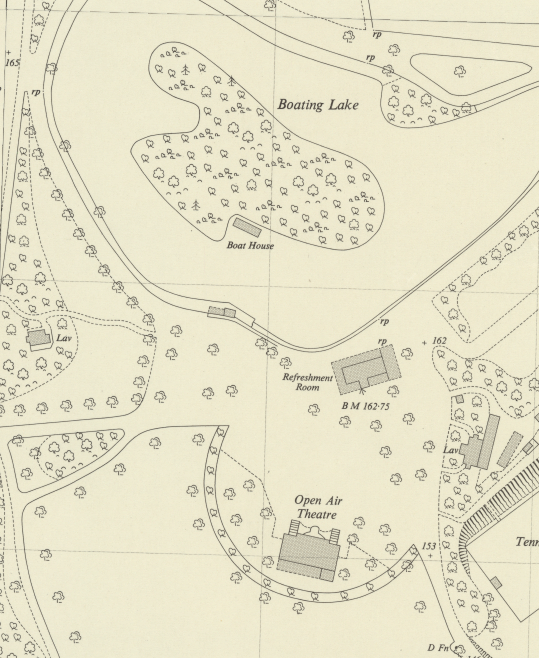 The theatre was built during the Second World War as a temporary structure. It was up and running by at least as early as 1944 when Australian escapologist Murray was on the bill.

The show was described as follows:

Round the world in magic presented by the king of entertainers--entertainer of kings Murray the amusing Australian escapologist mystery man. 6 beautiful scenes 30 marvellous illusions 60 delightful costumes 50 minutes in wonderland.

The only record I can find for the following year was a performance of the musical The Desert Song.

By 1946, however, the London County Council was in a mood to celebrate and started delivering very full summer programmes. In 1946 itselfe, the open-air theatre hosted a six week long season of performances to celebrate Britain's victory in World War Two, with a run of George Bernard Shaw's play St Joan, concerts by the London Philharmonic Orchestra (LPO) opera by the Sadler's Wells Company and ballet from the Royal Ballet.

In the following years symphony concerts became an annual feature, often performed by the LPO, who were the resident orchestra of the LCC's Southbank Centre from 1951.

In addition to the high-brow offerings. the LCC also put on some of its pwn shows. In 1948 it staged its ambitious London Story show. With over a hundred actors, this two hour show told the story of London over a thousand years in fifteen scenes from the building of the Tower to the Blitz.

Newspapers stirred controversy with reports that the show had cost £11,000 to stage and that only 20% of the theatre's 2,500 seats were sold.

The following year saw the staging of a Festival of Light Opera and the Ballet Rambert put on a full season. (See below for one of the programmes). In 1950, Warren Mitchell (later to become famous as grumpy TV character Alf Garnett) made his made his professional debut at the Open Air Theatre.

After 1953 performances at Finsbury Park became less regular, as the LCC focused their efforts on the concerts programme at Kenwood House and the Concert Pavilion at the Festival Gardens in Battersea Park.

By the late Fifties, Hogarth puppets (Britain’s best-known puppet company at home and abroad) were performing at the theatre. Their most famous puppet, Muffin the Mule, was a big hit.

As an LCC/GLC run park and at least until the early 1970s, Finsbury Park always had the atmosphere of a quality park, better than those under Tottenham & Hornsey/Haringey control. It was more like a regional park, rather than a local park. The amenities were better and the children's play area was always supervised, which wasn't the case for instance in Chestnut's (Woodlands Park) at that time. There were always a couple of park keepers present, who kept an eye on what we kids were doing, as well as the gardeners, who could always be seen working around and about the place. Chestnut's did have one Parkie, but no supervisors.

The same could also be said about Clissold Park, which also always felt better maintained than Tottenham parks.