Has anyone else been getting one of these through their letterbox? It was addressed to "St Ann's Neighbour" at our house.

Nextdoor has been a topic elsewhere on HoL, but this amounts to really dishonest marketing, as it contains the name of a neighbour (blacked out here), as if it were coming from or had been authorised by them.

Needless to say, this is the first the neighbour in question has heard of it. 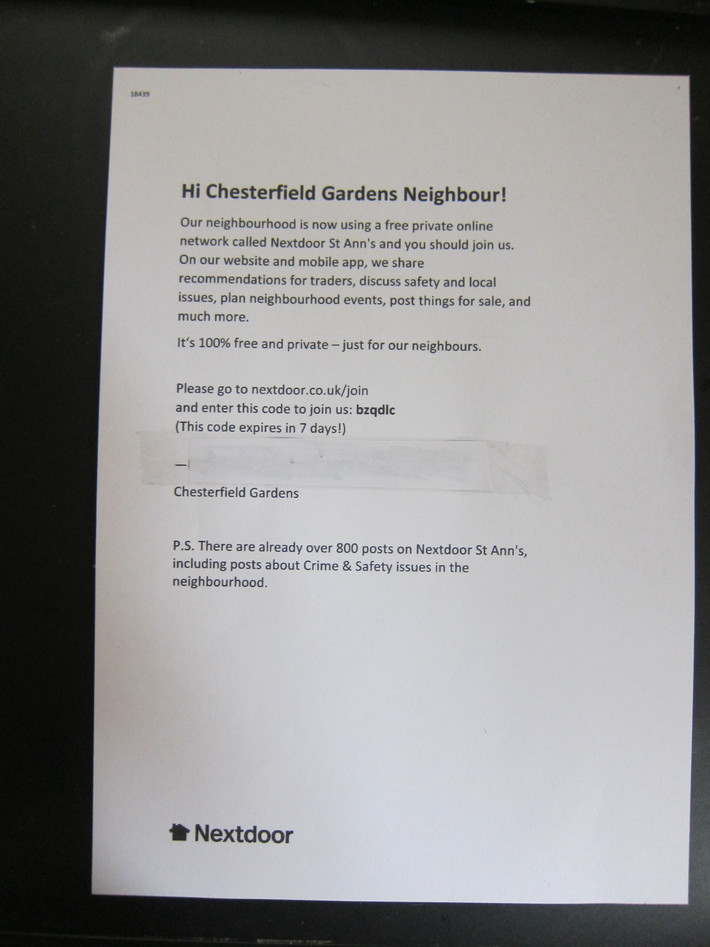 My advice is just ignore it, Peter. Next Door aren't any worse than Facebook. BUT, they are also very much like Facebook. They're heavily backed by venture capital in the expectation of future profits. Those profits will be made by selling the fruits of the data of those who join up. That's fact, not speculation.

The local Alexandra Park area website has been feeling under threat recently from Next Door. I do hope they survive as it would be a shame to see a truly local community venture sunk by a profit-hungry US outfit.

It's interesting that their leaflet mentions crime. One of their primary growth strategies is to make the police and local government dependent on them. They've been having a blitz on the Haringey Police recently and seem to have done a great sales job. At the last Ladder Residents' group the new sergeant didn't want to hear about HoL. She made it clear that she'd been told that NextDoor was the one to push. It saddens me to see our police in effect used as sales tools for American venture capitalists. But I guess that's the world we live in.

Whether you're in Harringay, Alexandra Park, Noel Park or Crouch End, vote with your fingers and stick with your truly local community website. At HoL we'll never use, abuse or profit from your data  and community will always come first, not profit!

Thanks for the info, Hugh.

I do hope the police don't turn their back on HoL.

The main reason why the leaflet hasn't found its way to the paper recycling yet is that I'm concerned that the name of a random, unsuspecting neighbour was used to entice us to join. I'm concerned that, from a legal point of view, there might be a privacy issue here. But then I'm not a lawyer...

That actually sounds like fraud to me! Really surprising that the police are in favour of this.

It's not generated by a random unsuspecting neighbour, a member of nextdoor must actually "sign off" on sending invites to people and thus it is authorised (as the original post wondered about).

That said, nextdoor constantly shows a visible reminder to encourage spamming, err inviting, one's immediate neighbours to join up.  I do wonder whether some people just send out their "10 allotted" invitations just to clear that notification....

I did sign up a while back, but haven't used it after lurking for a few months.   Probably should delete my account instead of just stopping use. Please note, while nextdoor have an easy to use "deactivate my account" function, this does not permanently delete the account or any other data you may have posted there - for that you must additionally make a permanent deletion request.

That's useful info about the permanent deletion. Thanks.

But if I'm reading the post correctly, said neighbour had not authorised it or heard about it,

What usually happens with NextDoor is that one person is given the lead role in a neighbourhood. They then have a vested interest in helping the thing take off. So usually it is them who generate these letters. It's pretty odd if a neighbour's name has been used without their consent. I don't think NextDoor would condone this. As far as I remember you have to prove your identity as part of the sign-up process. So it does seem pretty odd.

My sense is that there is probably a rational explanation for where the letters came from. I'm not immediately concerned about that (though it warrants bottoming out). My real objection to NextDoor is their over-riding mission and the long-term use that will be made of unwittingly gathered data.

There's a check box.  I opted not to check it before first using the site (and I still haven't).  But I like the site.  I live in St Ann's too so it is more local to me than HOL.  I'll continue to use both.

Yup, I can see that if you live in the West Green or South Tottenham parts of St Ann's ward, as you do, an online set-up centred more on that would feel more local. For those areas it's more relevant as, like many areas of the country, there's nothing else focussed on that area. I imagine you can only take so much of me and others banging in about Harringay!

I am a member of Next Door Stroud Green after getting a leaflet through the door and I will say it is very helpful and informative.

Yes, the upside is that it provides a local communication space; no doubt about that. But, it's the hidden agenda that is of concern. A book worth reading on this area is The Age of Surveillance Capitalism by Harvard Business School professor, Shoshana Zuboff.

In his review of the book inThe Guardian,  John Naughton has the following:

The headline story is that it’s not so much about the nature of digital technology as about a new mutant form of capitalism that has found a way to use tech for its purposes. The name Zuboff has given to the new variant is “surveillance capitalism”. It works by providing free services that billions of people cheerfully use, enabling the providers of those services to monitor the behaviour of those users in astonishing detail – often without their explicit consent.

“Surveillance capitalism,” she writes, “unilaterally claims human experience as free raw material for translation into behavioural data. Although some of these data are applied to service improvement, the rest are declared as a proprietary behavioural surplus, fed into advanced manufacturing processes known as ‘machine intelligence’, and fabricated into prediction products that anticipate what you will do now, soon, and later. Finally, these prediction products are traded in a new kind of marketplace that I call behavioural futures markets. Surveillance capitalists have grown immensely wealthy from these trading operations, for many companies are willing to lay bets on our future behaviour.”

You pays yer money and takes yer choice. But I choose not to be a data source for a data capitalist, especially when there are alternatives.

Yes and I hate the spurious 'friendly local' feel of the name, Next Door, when it is in fact a giant American corporation that's behind it.