On Monday night the Planning sub-committee approved the application to build a 14 storey tower on the Harringay Ladder.

Over 100 local residents objected to the application and three of us spoke against it. This is the first time I have opposed a planning application in my life and the experience was a profoundly depressing one for me. It left me very disillusioned with how planning decisions are made in Haringey and fearful for our future if this is the way things are done round here.

I'm comfortable losing a case where it's lost fairly, but for it to happen where the rules of the game are so very clearly ignored and the referee so obviously looking the other way feels deeply troubling.

When the objectors spoke on Monday, each one of us made it clear at the outset that we welcome the development of housing on the Hampden Road site, including the maximum possible level of affordable housing. Our contention, clearly framed against the policy framework, was that this is simply the wrong development. A 14-storey tower is very explicitly ruled out by national, regional and local planning policy. In essence the policies make it unequivocally clear that tall buildings are allowed only in town centres or in specificlly designated development areas. The latest iteration of the local policy was finalised as recently as this January.

Throughout this process the planning team has repeatedly advised councillors and the GLA that Hampden Road site is in the Heartlands designated development area, where tall buildings are alllowed. It is not and it never has been. The official Haringey Council map we provided the committee on Monday makes this clear (it's the area fringed by a red line with grey teeth). A map from the 2016 policy revision adds a further layer of evidence by showing exactly where tall buildings are allowed. 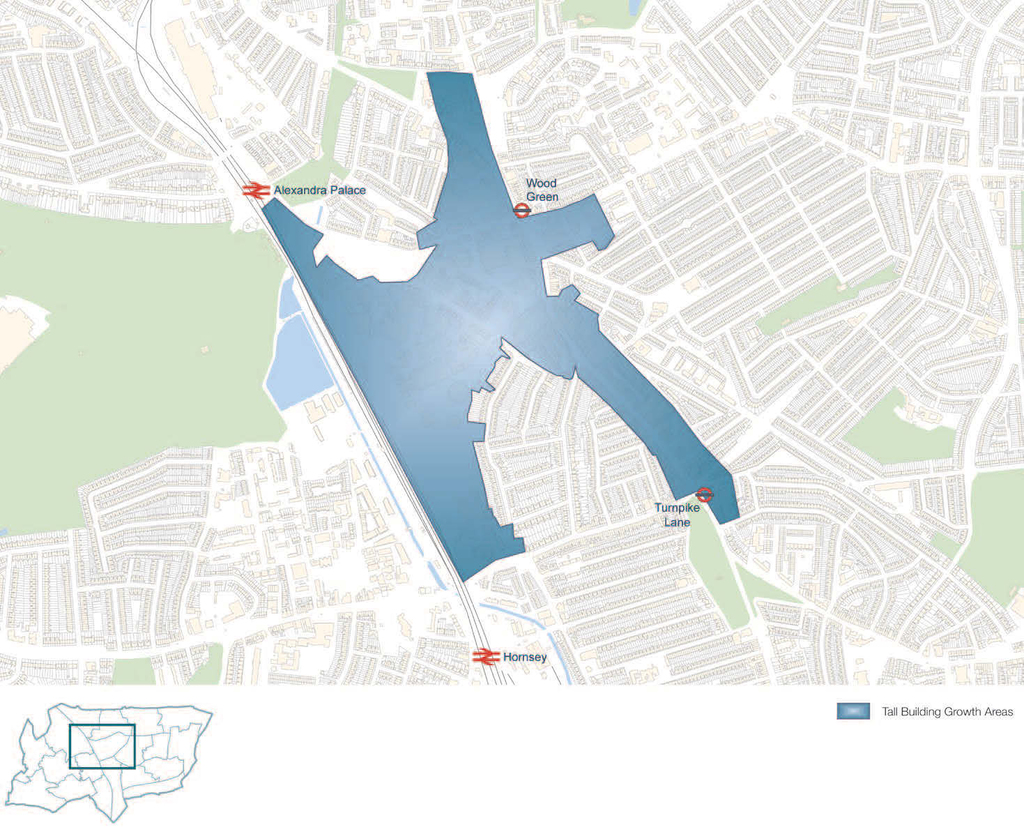 What's so ridiculous is that in the area directly to the north and north west of the site, tall buildings are allowed. Yet in this area, we've seen the New River Village top out at 8 storeys, Smithfield Square at 7 and even the Heartlands area at just 10 storeys. Housing is a priority, yet in all of these areas the Council has not taken the opportunity to maximise the housing provision. As I asked the committee on Monday, what's so special about the Hampden Road site?

We've had inane explanations from planning officers like it will "enhance heritage assets" and that it is "animated to a degree so as to add interest" to the local area (which an architect described to me on Monday as "absolute bullshit"). I met another architect I know recently who regularly attends planning committees to speak for developers. When I mentioned the Hampden Road case, he responded, "Oh the Fairview Nightmare". Apparently the development is becoming renowned in architect circles as being preposterously out of scale.

The case for refusal was clear and the development has already attained a notoriety beyond the borough's borders. Yet it was approved unanimously with the lone exception of the one Lib Dem councillor on the committee.

I'm left struggling to understand why. I'm still not sure that I know, but there are some things I can share that are part of the puzzle.

The first iteration of the building came in at 9 storeys. That was refused and amended to 12 for the second application. During the planning process that increased to 14 storeys, apparently in response to a group of councillors meeting as the "Quality Review Panel". Neither developers nor councillors operate in isolation. The developers bid for all they can get. The councillors are guided by the officers, who respond to a quiet political hand. So I'd like to better understand who guided the developers to submit a solution that is so clearly against planning policy? What drove this? Was it just incompetence or was there another motive?

In seeking an ulterior motive, the only suggestion that has come to light is the drive for new homes, in particular for affordable homes. Both London and local policy has set targets for both. However, in their fight to develop Tottenham, the Council have agreed with the Football club that they can build their huge development free of any obligation to include affordable housing. One wonders if there's a shortfall to be made up as a result of this strange deal. I certainly got a flavour of that from my sources. It was made clear to me that there had been majority party discussion on this application and that the unofficial line favoured approval because of what was described on Monday as the "unusually high level of affordable housing it includes".

There's a cost to affordable housing for the developer and the Council have dug themselves an affordable housing hole. It's in the interests of both to do a deal that both can live with. It seems that this deal was done. Our local community however pays the price in the long-term. We're left with a totally out of scale building that openly flouts national, regional and local planning policy.

There is even doubt on whether the danegeld has a glister that belies the truth of it. There are three types of affordable housing - social rented (council rent levels), discount market rent and discounted purchase. This development offers only the last two types. The issue then becomes focussed on the level of discount provided.

Harringay Ward councillors Cllr Zena Brabazon and Cllr Emine Ibrahim both addressed the committee on Monday. Both focussed on the issue of affordable housing. Both were concerned about the level of discount offered. Crouch End based Cllr Ibrahim made it clear at last week's LCSP meeting that she supported the development and was prepared to accept the building height that has so concerned local people because of the affordable housing included. Yet on Monday she voiced strong concerns that the level of discount on the affordable housing was unacceptable. Even some of the scheme's most ardent supporters feel that the price the developer paid was too low, even for them.

To cap all this the hearing for the Harringay application was preceded by one for an application for a six-storey building in Tottenham.  One of the primary complaints of the objectors was the building height. The committee members listened intently and questioned them at length about their concerns. This application was accepted by a narrow margin of one vote, but at least the committee engaged with the objectors and showed interest in their issues.

When it came to our application for a building two and a half times the height of the Tottenham application and in clear breach of planning policy, the members showed absolutely no interest and didn't ask us a single question. The speaker from the Wightman Road Mosque was so incensed at being dealt such short shrift that she immediately made representations about it to the Council.

The contrast in the levels of committee member engagement with the two applications was astonishing. It was explained to me afterwards that the reasons for the difference probably lay in the fact that the local councillors for the area where the development in first application was based had been strongly lobbying for their residents. This ensured at least the engagement of their colleagues on the committee, if not the hoped for result. Such lobbying was not conducted by either of our two councillors elected in 2104. (In fairness to our third and newly elected councillor, the recency of her appointment meant that she hasn't been in a position to do anything till it was too late).

Even the very process designed to give the residents a voice has built-in frustrations. Each objector was given just three minutes to outline their objections. This responding to an application running to many hundreds of pages and covered by complex planning policy. These allocated minutes contrast with the hours, days, weeks and months the developers spend with officers and councillors. At every stage the playing field is not level. The planning committee has a quasi-judicial status. I can't imagine any judge would feel that this quasi-court gives all parties even a quasi-fair hearing.

Should anyone believe that I'm alone in my concern about this tower, in the Evening Standard yesterday Simon Jenkins reported a recent Ipsos MORI poll which found 60 percent of Londoners think that London's fixation with tall buildings "has gone too far". (I'm not sure how I would have answered that question; I love tall buildings. I find skylines in the US dramatic and exciting. But tall buildings need to be built in the right place).

So what hope for the future? We have a huge swathe of development planned in Harringay. So we'd better be on our toes. Jenkins in his reflective piece in the Standard following Prince Charles's recent speech about development in London despairs of finding any remedy with architects and planners but wonders if there's salvation to be found with the new mayor:

Why do architects and planners so hate what people claim to want and ignore the evidence of what has made London so popular and habitable? Why can they not create the neighbourhoods in which they themselves mostly live?

True power lies where it should lie, in the mayor who is elected to decide on London’s overall appearance. The first two London Mayors, Johnson and Ken Livingstone,  created a London skyline that is a visual car crash.

Their decisions have, mostly, been environmental disasters. Standing next to the prince last week was a certain Sadiq Khan, the new Mayor. He was applauding enthusiastically. We wait to see if he meant it.

London's future will no doubt look out for itself. Here in Harringay, we should attend to what happens on our doorstep. One thing that this week's profoundly depressing experience has made me certain of, however, is that if I ever take part in objecting to a planning application in the future, I will not waste much time again engaging in the openly democratic part of the process. The levers, it seems, lie behind closed doors and in trying to gain some of the same long-term access that is generally given to developers.

Has everyone forgot ,there was a tower block in this vicinity not too long ago ,which was knocked down to make way for the new houses built at the other side going towards Tottenham lane ,we had so much greenery ...trees etc grass verges ..all gone .why? This is very unfair to the residents that will live in the shadows of this.

The council are under huge pressure from central government to "build houses". They don't actually have any money to build houses so they rely on developers doing it. The London Plan allows very high densities to be built near railway and tube stations so we're getting towers near them.

No, wrong, John. The London Plan might encourage such developments but its; the Council which determines the location of tall buildings in it's local plan. This development should very clearly have been refused because it was not in a zone assigned by Haringey where tall buildings should be built. There is no doubt whatsoever about it. It's a long story which I've told a zillion times before - see above an the other threads linked by the tag under the main post.

Thanks for the update.