All that's Left of James Sydney Beale of Harringay I came across the above image labelled First World War Death Plaque, James Sydney Beale, Harringay. I thought how awful for a family to be left with just that piece of metal in place of a son. So I thought I'd 'speak James's name' and just find out a little more about him.

I found that James worked as a clerk and lived at 96 Roseberry Gardens with his mum Annie, his dad James (a printer's cutter) and his brother Harold (his brother was three years younger than James and so just missed the war). The family had been in the house since 1901. So it is likely that they were its first inhabitants. They stayed there till James Senior's death in 1936.

Young James joined up on 2nd March 1917. Just five feet and six inches tall, he was six weeks short of his eighteenth birthday at the time.

Brings it home a bit each time I find out more about someone's story.

I have attached his war record below.

Permalink Reply by Bethany Burrow Atherton on March 26, 2019 at 17:03
I may have more on him (possibly a picture) - he was one of the men from St Paul's Harringay who went to war. Will check and get back to you.

I have a picture which I've sent to you.

He would have been a member of the Young Men's Bible Class at St Paul's Harringay and this photo (which ended up in a folio sized, leather bound album in the London Metropolitan Archives) was displayed with those of his other war-bound classmates in the church vestry and, later, in the Church Room.

He'll probably feature in one way or another in the book I'm writing about the people of St Paul's Harringay in the First World War, which might be finished this century if I put my mind to it ;)

Funnily enough, I did wonder if you'd have anything on James. Here's the image you provided. 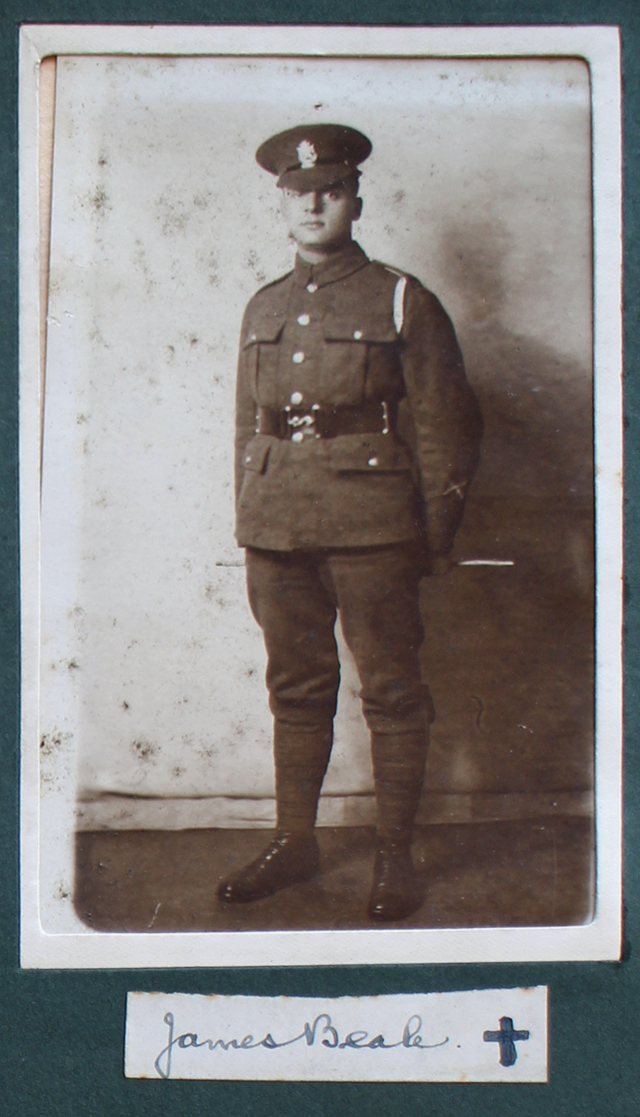 Thanks Hugh. The cross against his name was to denote he died. Someone, probably William Barrenger, who was Mayor of Hornsey for a time and church elder in various capacities for many years, and lost a son in the war himself (I think it's his writing based on other documents), went through and marked the pictures of all the men who didn't come back.

It's always worth checking with me if you come across a name - the Roll of Honour and the War Memorial both were intended to be local things and not specific to St Paul's, even though it was the church that organised them. I know of at least a few men listed on them who were members of other Christian denominations and there's at least one person who was Jewish or of Jewish origin.