A Wander Along Park Road of Old (and Less Old)

For several centuries, Park Road was named Maynard Street, after a landowner of olden days. It got renamed as being the road to the new Alexandra Palace and Park 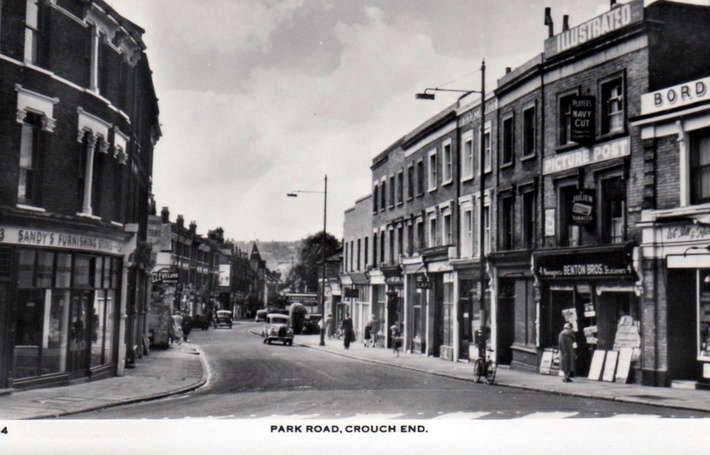 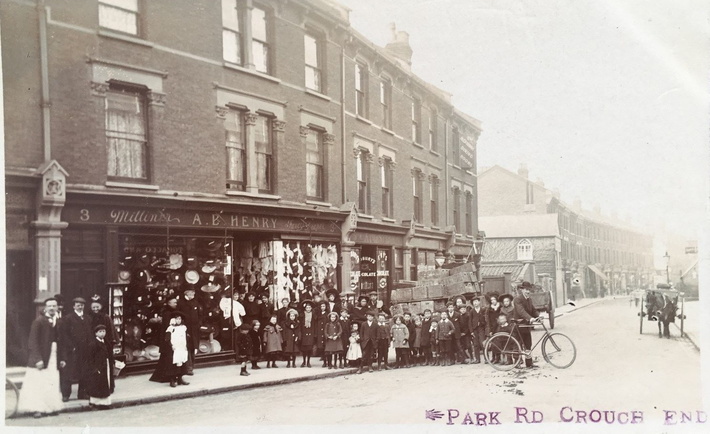 Just across on the right is a newsagents shop. 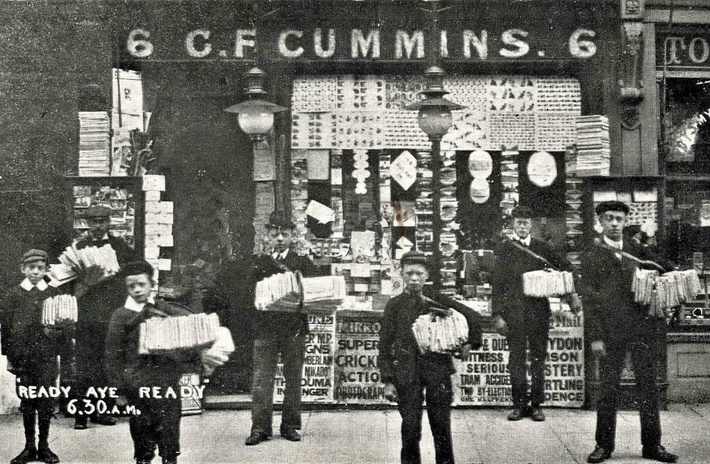 These shops are just along from the newsagents. 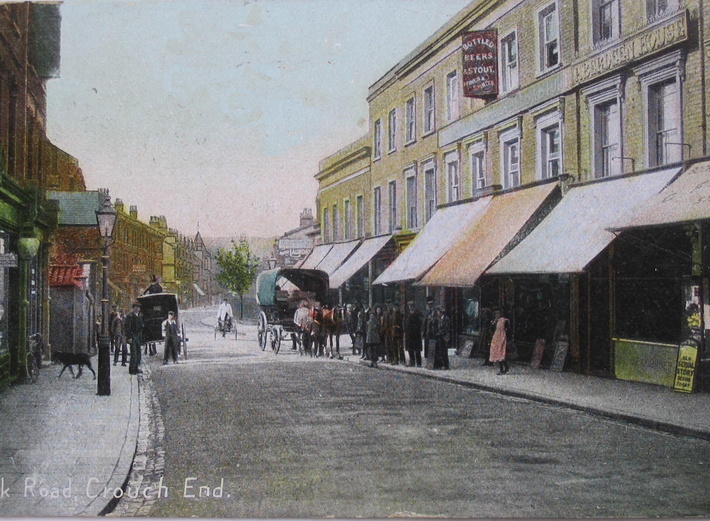 Back on the left again, that cafe must have been handy while waiting for your car to be servived at the Cleveland garage. 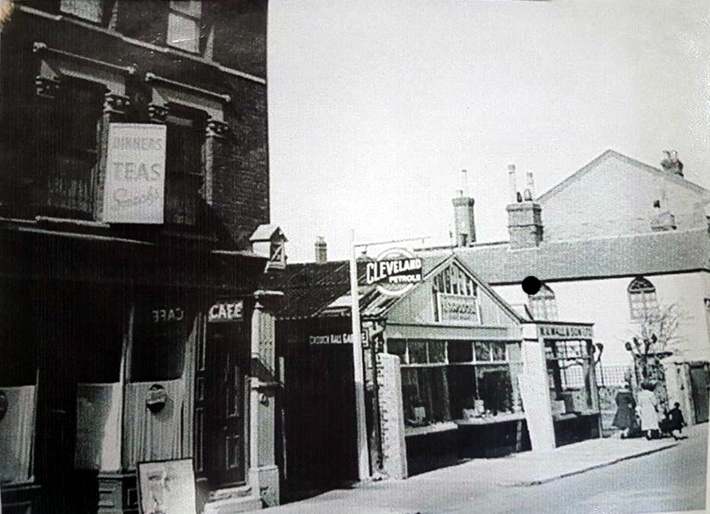 Next door along was Stone Cottage. 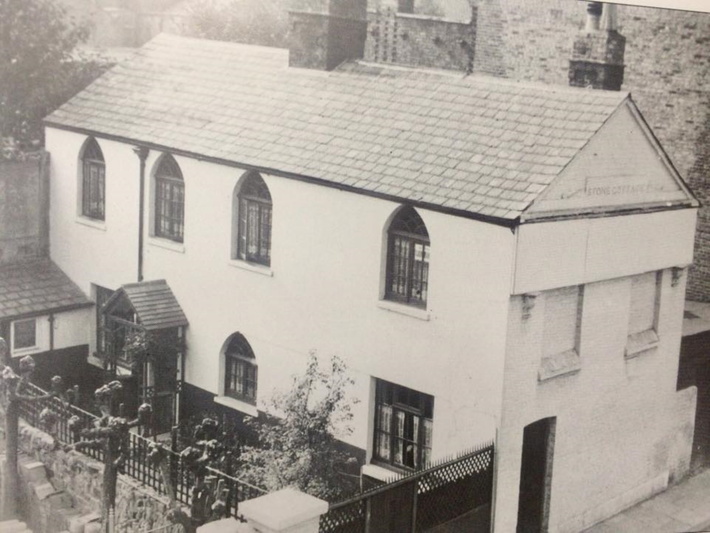 Across the road were some small shops.

Across on the left again, this is a view back towards the Broadway. 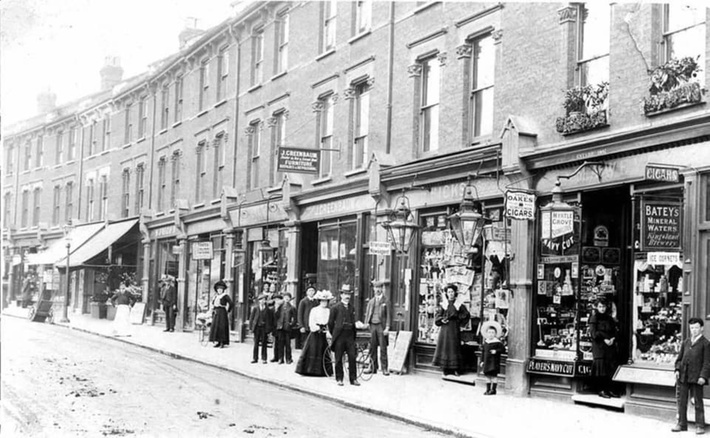 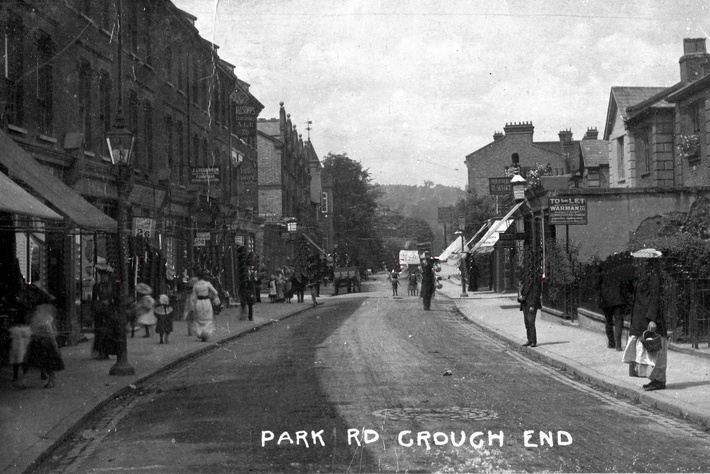 Don't get dizzy looking backwards yet again from further along! Note that splendid cafe on the near right, The China Cup. 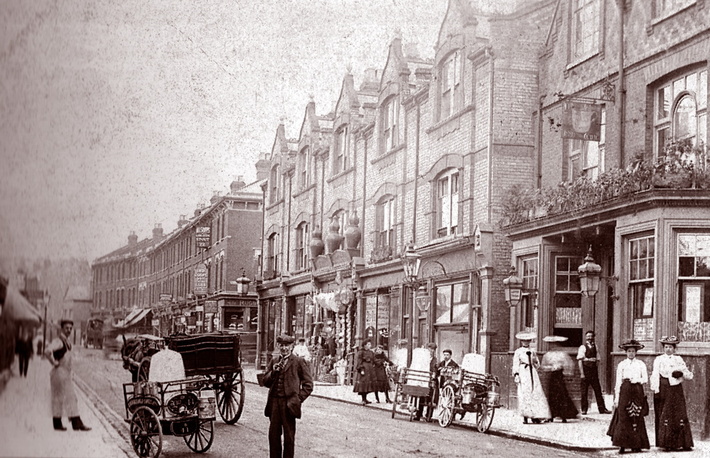 Another look towards the end of the terrace, ending in Pax Hall. Now for some refreshment at the Maynard Arms, presumably named after the erstwhile street. 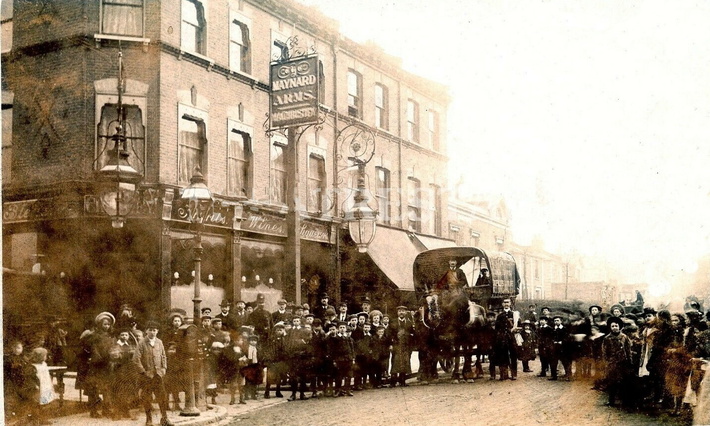 Looking back towards The Maynard Arms. 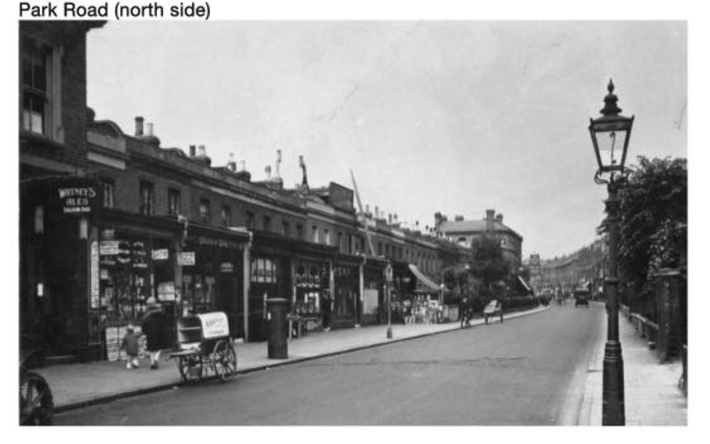 Facing that junction was Palace Motors. "The Esso sign means happy motoring" etc went the advertising jingle when the only alternative to BBC TV was ITV. Gosh a choice of two channels - a 100% increase on before. 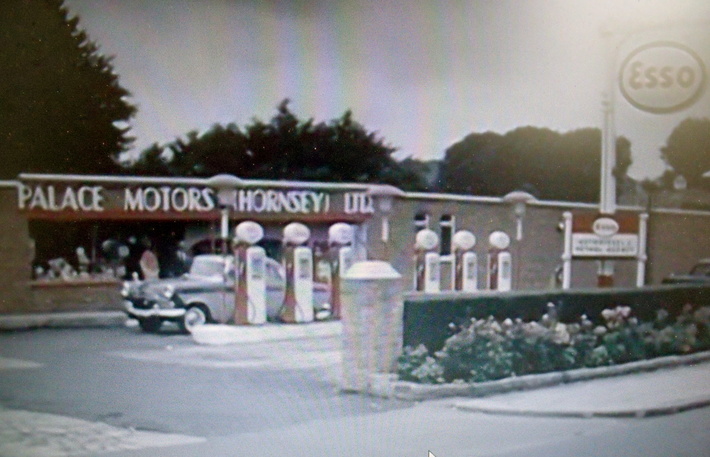 It was a bit more built-up prior to Palace Motors. This terrace included the original Bird in Hand pub. The Bird in Hand of modern times was a somewhat diminished building but a great pub, with ex-footballer Jock Weir in charge. This was a last-day photo by Sean Kavanagh. The site is now a small apartment block. 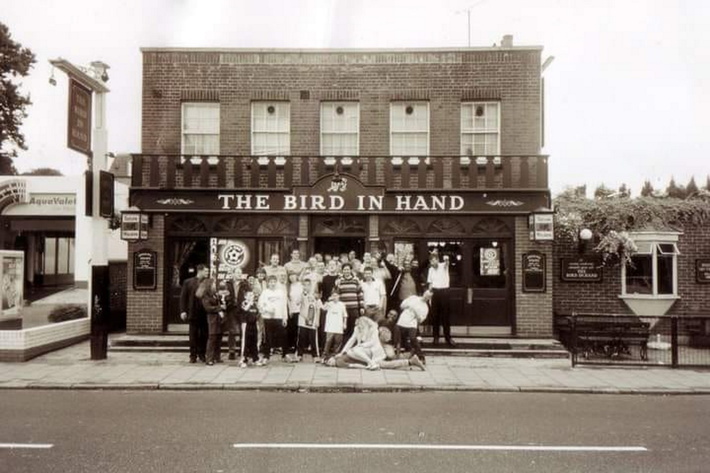 Bunty's was almost opposite the swimming pool and is remembered under various guises according to age. I recall it as the Venna Bar, with froffee coffee and a juke box playing "Alley Oop". Park Road swimming pool of fond memory of many over several decades - unless for school swimming lessons on a chilly day. I just remember it as long hot summers, latterly including frantic revision on the paved area prior to GCEs. 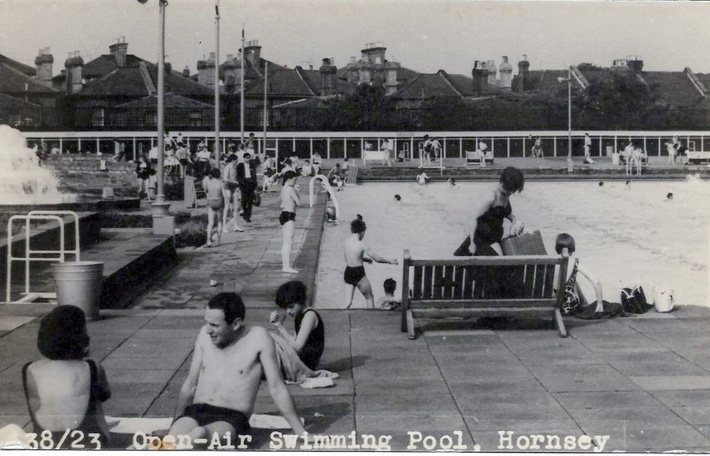 Next door was the Cottage Hospital, where many a tonsil vanished under the ether! 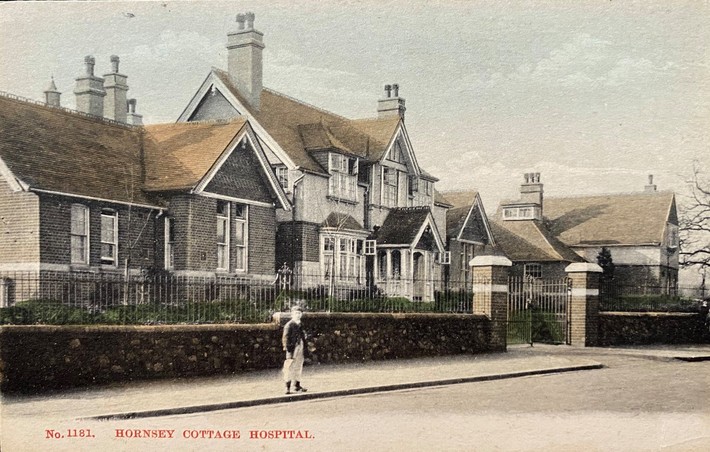 Over the road from the hospital is Ramsay Court. 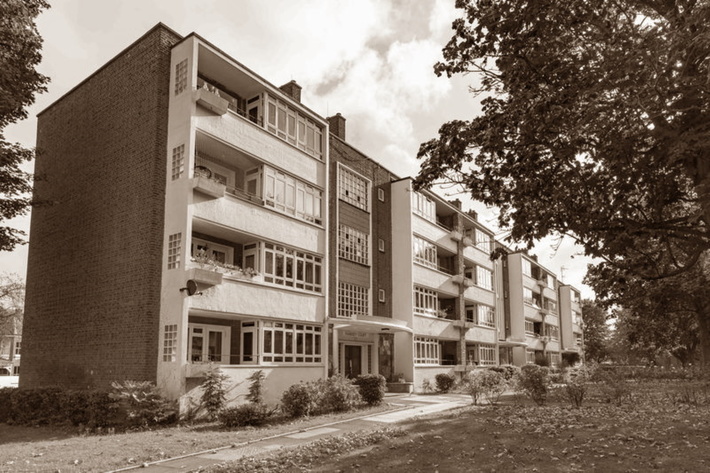 Finally we arrive at The Victoria. Muswell Hill climbs up leftwards, Ally Pally approach is up half-right and around the bend to the right is the end of Priory Road. Thanks for posting this, Ken. As I said to you before, this is an excellent record of the road. I'm glad you've posted it here as it needs preserving!

PS: I’ve known for a while that Park Road used to be Maynard Street. But your post got me thinking about why. British history online explains that it’s apparently named after the first recorded owner Stephen Maynard, who acquired the land in the 14th century. However, he was the first in a long line of recorded owners. So, I suppose the loss of his name when the street was renamed Park Road is perhaps not a particular historical travesty.

What a great trip along Park Road

Thank you Ken. Enjoyed your journey along Park Road -every photo a treasure.

So, from the top... Cleveland was the fuel of course; it was Palace Motors I think.

The Maynard Arms I dimly recall but the Bird in Hand was favourite haunt of the Hornsey Journal gang - the man who took the picture was one of our I think. Jock Weir was a cracking chap, managed Preston North End before taking the pub I think.

Bunty's sold me ice cream but also the infamous frozen Jubbly - anyone else yearn for the slushy ones?

The pool holds fond memories and some of embarrassment - I cannot even recall her name now! Shame on me!

The cottage hospital has my tonsils, repaired a dislocated thumb and, in 1964 when I left home, benefitted royally from my mother handing over both my brother and my collection of over 200 Dinky toys, some boxed. I was incensed and even called the matron (who I knew from Hornsey Journal days) to enquire whether I could see if any had survived and if I might have them back for a donation. She said "I am sorry Richard but the consultants took almost all of them"...

And finally, the foot of Muswell Hill, where in 1962/3 a lorry ran away down Muswell,  smashed into a bus at the stop by the visible pedestrian crossing and killed two or maybe even three people as the bus was  thrust into the queue as well as the front of the shop. I had been at Highgate Court and came down the adjacent Cranley Gardens to be confronted by the debris a few minutes after the accident.

I checked Google for any records of the crash but found nothing. Anyone have any recollections? Pictures even?

Great memories Richard, makes me hanker after the good old days; especially reading the local news in the Hornsey Journal!

Bird in Hand. Our favorite watering hole. Jock Weir was a great publican. A couple of years after we moved away, I was back in London for a meeting and took the opportunity to pop along for a nostalgic pint. He remembered me, including where I'd moved to. A Double Diamond works wonders!

I remember Bunty's being the Venna Bar in 1960 because that's when "Alley-Oop" was released and being a juke box favourite there . As for Jubbly, I wish people would correctly say "Lubbly" as the adjective, not "Lovely". They're the same sort of folk who say Robin Reliant rather than Reliant Robin, when referring to Del Boy's van - aside from it being a 3/25, not a Robin. If we took more care about such things, the world would be a better place  ;-)   ;-D

I recall more than one occasion of vehicles running out of control down Muswell Hill. After one non-injury incident into the pet shop frontage, they put a sign out asking customers to leave their vehicle outside.  I had a worrying time coming down Muswell Hill a little before that. We were returning from army cadet summer camp. Others were luxuriating homewards by coach but because I was quite well-travelled by then, by bike and motorbike, I was detailed to accompany the driver of the ancient depot truck carrying our baggage & equipment as it hurtled down from Sherwood Forest, sometimes attaining 30mph in favourable conditions. Muswell Hill was my normal route from north and only as we started down the hill did it occur to me that it wasn't the best of ideas in that vehicle. However we descended without incident.

Talking of cadets, the picture is of cadet annual dinner at the Priory Road drill hall 1961 or 2. The chap in civvies far left was Hornsey Journal, I think. Do you recognise him, perhaps? (I'm the cadet far right, ladling soup in)

Oh dear... caught in the act! That is me! I cannot now recall the event itself but that's me, complete with natty new flute! Do you know what year that is and did you go to Stationers'?

Your sins are uncovered!

You both look great.

I remember looking back at photos of the sixties from the following decade and thinking how dated all the hairstyles and fashions were. Now you wouldn’t look out of place on the tube dressed as you were then, whereas anyone dressed in 1970s garb would look distinctly out of place.