Film: "Scenes from the Farm" + Q&A with Clasford Stirling MBE 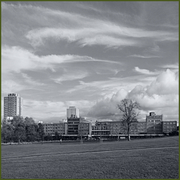 1988 TV documentary about the African-Caribbean community on Broadwater Farm, Tottenham.

Also exhibition about the history of the Farm.

This powerful film, shown on Channel 4 in 1988, focuses on the daily lives of the African-Caribbean community who lived on Broadwater Farm Estate in Tottenham after the 1985 'riots'. The 'riots' or 'uprising' erupted on and around the estate in response to the death of South Tottenham resident, mother Cynthia Jarrett, after police raided her home.

In attendance at the screening will be Clasford Stirling, who has played a large part in bringing the Broadwater Farm community together since the 1970s, organising positive activities and support for residents and local youth. 40 years ago Clasford set up and still manages Broadwater United Football Club, whose 10 youth teams are based at the Broadwater Community Centre / Lordship Rec sports field. Clasford will be happy to answer any questions after the screening.

The film and exhibition will be a chance to appreciate an important piece of Tottenham history, organised as part of Black History Month.

Just turn up - no need to book.