Wordsworth Parade is the short row of shops set back from Green Lanes on Alfoxton Road, opposite The Queen's Head.

The shop trading as LWTA Co in the picture subsequently became the George Brooks, Cycle Shop - part of the Claud Butler cycling story.

I see that there was a little tower (now gone) on the building to the right of St Margaret's Avenue as well as on the left (still there).

It's the first time I've seen the use of 'West Green' to apply to an area so far west. I assume this was a non-local postcard manufacturer.

This photo has a particular interest for me since you can just see some the the first houses built in Harringay after Harringay House. There were two detached houses and two pairs of semis built on Green Lanes opposite the Queen's Head by around 1850. These were pulled down after WWI and Mountview Court was built in their place.

What looks like it might be some of the original fencing to the northernmost house is still in place.

The map snippet below shows the houses I mentioned, but predates the building of Wordsworth Parade. 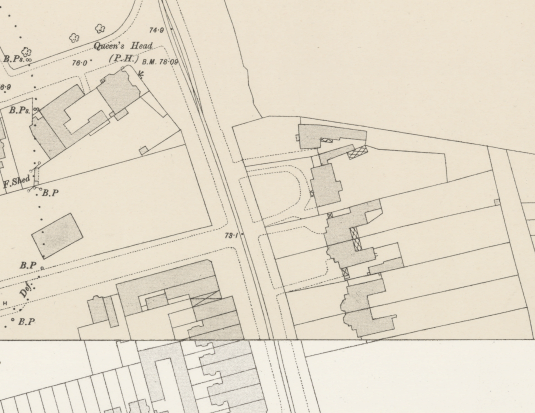 I've just noticed another item of interest. I've written before about our milestones. What's showing on the right of the picture  looks suspiciously like another milepost marker. However, the 1893 OS map shows that as having been on the corner of Fairfax Road.

My gran lived in Mountview Court in the 50s.

Comparing now and then it looks as if the building with the tower that has gone may be bomb damage? The building there now (Harry's fruit and veg in my day!) is set back further than in the picture or on the plan.

This map suggests a bomb in that location - the one that damaged our house (before we moved in) is nearby.

Bombsight has it as N17! It is N8 and N17 is even the wrong bit of Tottenham being north and it is N15 that covers St Annes and the south.