Campsbourne Lodge was just to the north of Hornsey High Street, roughly where The Campsbourne is today. To the best of my knowledge, no known image of Campsbourne Lodge survives. In a discussion over the last week where a handful of us were trying to decode a picture of the first Alexandra Palace, I suggested that the house in the excerpt above might be Campsbourne Lodge. It's far from certain, but there's a distinct possibility.

I don't want to shoehorn the identification. But if it genuinely is Campsbourne Lodge, that would be very interesting,

If you have the interest and the patience to read through the other discussion, I'd be interested to know your thoughts.

Tags (All lower case. Use " " for multiple word tags):
Albums: Historical Images of Hornsey | 2 of 2

I think it's quite possible, Hugh, on the basis of eliminating the various other local properties that it is in the wrong position for!

I am sure you all have done the same as me & looked at the 1871 census? It is hard to work out what is the lodge? Could it be then occupied  by Henry Charles Hitchman, a wine merchant, wife & daughters  ? There are 3 unoccupied houses listed before it. Lots of carpenters & bricklayers living here ! guess they are involved in the new house building? Hitchman died in 1873 at Horsey Rise ( Beaumont rd) see probate encl. his wife died charles%20Henry%20HITCHMAN.pngshortly after. His young family must have been in trouble. Thanks, Gerry. My understanding is that the last occupant of Campsbourne Lodge was William Eady. He came up recently because his eldest son, Henry John, married the eldest daughter of John Gibbons of Colquon (near Old Crouch Hall). Shown below in the 1861 census. Like most of the houses, the only addresses given was ‘Hornsey Village’.

As I said in a comment on the photo decoding discussion, he house was sold in 1866. It was bought by the British Land Company and I don't think it was lived in again before it was demolished.

My reading on the 1871 census is that the house has probably been demolished. It shows Campsbourne Road and Campsbourne. I think Campsbourne (later The Campsbourne) approximately equated to the driveway of the old house. The house itself stood on a site directly to the east of The/Campsbourne. Six dwellings are shown for Campsbourne as well as a mews and a coach house The 1893 map shows that by that time Campsbourne consisted of seven dwellings. That sounds like it's probably a match.

It's interesting to not that at number 5 was Alexander Mackenzie, landscape gardener. I imagine that this was one and the same responsible for gardens in both Alexandra Park and Finsbury Park. The AIM25 website has the following on him:

In 1863 he was appointed superindendent of Alexandra Palace and Park, and then became the superindendent of open spaces owned by the Metropolitan Board of Works, giving him responsiblity for Finsbury Park, Southwark Park, Victoria Embankment, Albert Embankment, Hampstead Heath, Blackheath, Shepherd's Bush, Stepney Green, Hackney Commons and London Fields. He also took on private landscape design work in England, Ireland and Scotland, including work for the directors of the Metropolitan and City police orphanage, the board of management of the Middlesex County Asylum, Birmingham Town Council and the Lord Provost, magistrates and council of the City of Edinburgh.

Assuming the green-dotted buildings are the centrepiece of the old photo, a better juxtaposition for Campsbourne Lodge would be as dotted in red, just under the o of Hornsey. It is also amongst trees, as per photo.  1873 OS map "surveyed 1862-69".   [PS Thought I'd posted this earlier, so either I failed to press the load button or it is squatting on some other thread!] The 1815 Enclosure Map may be of help here. In this map, I'd say the only candidate for Campsbourne is the green-dot building. Those buildings off to the the east look to be in a different plot of land, possibly farm buildings, perhaps leased off by the estate. I suspect that the buildings just to the north of the green-dot are he stable blocks.

I think the whole contiguous land holding is edged in yellow. It is marked as Jacob Harvey Esq. 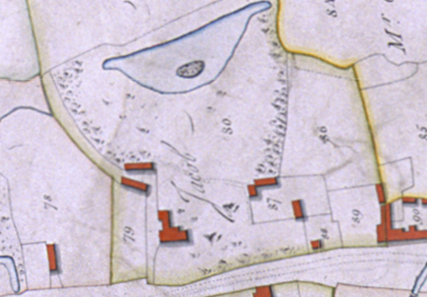