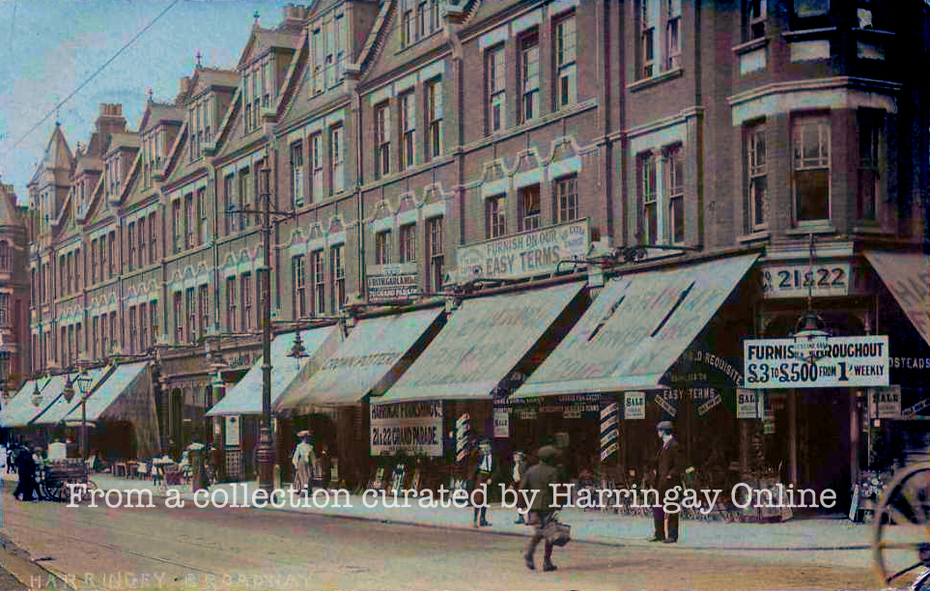 "Harringey Broadway", eh". Mmm, I wonder. And in the middle of this parade between Kimberley and Salisbury is where Iceland stands today. I still haven't got to the bottom of what happened there. 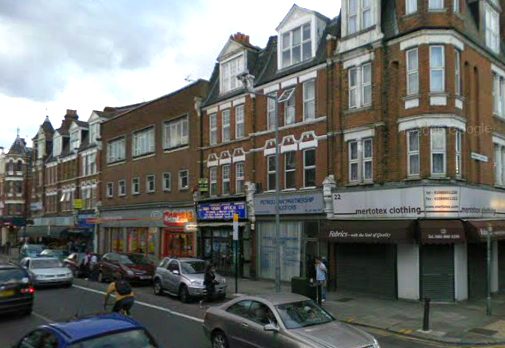 The Iceland was I think a woolworth store which burnt out ca.1958-1962 and was replaced by what was quite a stylish building (and still could be if it had decent shopfronts fitted).

It was definitely a fire, but I'm not 100% sure if it was a Woolworth store or whether it was 'The Egg Store'.  A grocery store, where my mum would buy my favourite 'rissoles' - a 1950s-60s burger type thing.

There was also an 'Egg Store' on Tottenham High Road near to Bruce Grove at the corner of Brook Street. Both were closed in the 1970s.

Here are a few memories citing those two shops Stephen - posted elsewhere on the web in response to a question I added in 2008:

Me and my parents and mum's grandparents and my 2 brothers lived at 91 Mattison Road, Harringay from 1950 to 1967 when we moved to Hornchurch.

I went to the infant and junior schools in this road and then to secondary school Priory Vale in Wolseley Road, Crouch End.

We had some great shops on Green Lanes at the bottom of our street that sold all sorts of things. There was Hahns the baker, Williams the hardware shop for paraffin for our heaters or bamboos for the garden. Martin Fayers sold tools, I still have some which I use to this day. My jack plane for example was £2 12 6d, now it would cost about £45. I worked in this shop after school, cutting keys and sweeping, including the piece of pavement outside the shop. When they moved shop to the bottom of Seymour Road I helped to moved a lot of the stuff along the pavements on tables with wheels.

I used to go to Duvals the sports shop, where I bought a 5 foot billiard table (I still have it), and a pair of roller skates, used at Ally Pally. Sometimes my mum and nan would shop at Harringay and sometimes we got the trolley bus up to Turnpike Lane and shopped at Wood Green.

We used to get tea at Woolworth's some mornings at Harringay. There was an egg shop too (which just sold eggs). Stock car racing was an occasional event and the circus at Harringay stadium at Christmas time. My favourite shop was Greenways which was like a small Gamages store to me.  Downhills Park nearby had a small road system where kids could hire a bike and practise their road skills. The police came to our school to show us the 'walking man' road signs, the first in London I believe.

Comment by Andy Newman on July 8, 2012 at 11:27
I love the teardrop gas lamps which protrude from each shop, this is the first photo I've seen of these. Would be great to have the remaining few iron work arms on Grand Parade restored with these lamps.

Were the Egg Stores related to the one in Stamford Hill, with its rather wonderful signage?

Thanks Hugh, lovely picture.  Please can we have one of the opposite side of the street where my grandad had a sweetshop shop at that time.

HarringEy Broadway.  Spelling!  No such place as HarringEy, this spelling was erroneously used by one of the credit card clearing houses!  These pictures both show HarringAy Green Lanes.  But the historic pictures are always interesting, no cars or buses, but not even a horse and cart!  How things change the tram tracks are just discernible.