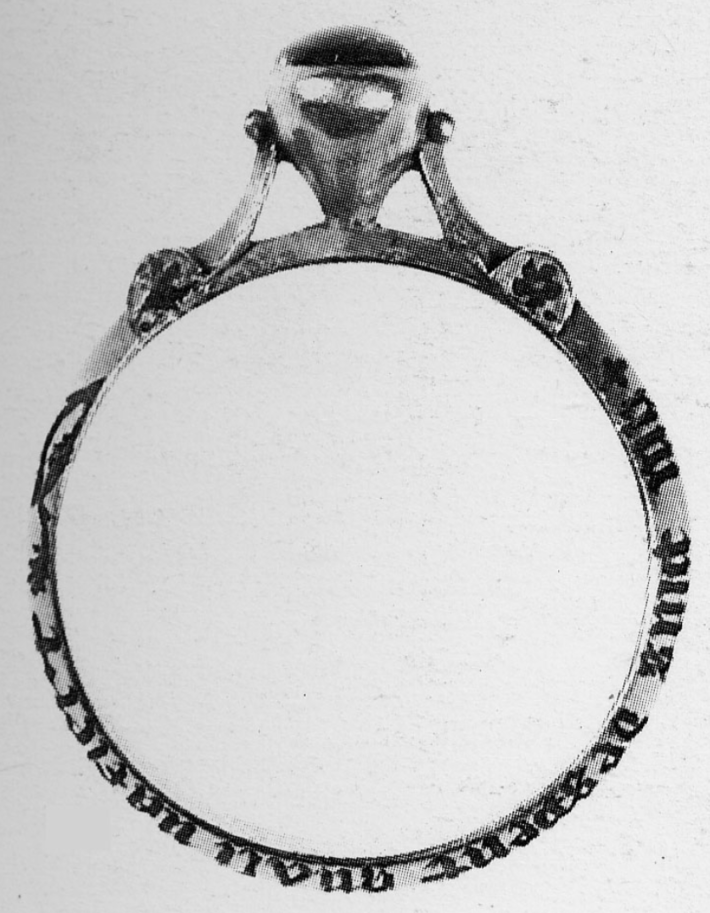 This 14th century gold and emerald finger-rings is in the collection of the British Museum. It was found at the Queen's Head Tavern on Green Lanes in 1898, probably when the pub was being rebuilt.

The ring is engraved in black letters with the legend:

+ QUI PLUS DESPENT QUA LI NAFIERT / SANS COLP FERIR A MORT SE FIERT
He who spends more than belongs to him / Kills himself without striking a blow.

Although the ring was acquired by the British Museum in 1899, it has only been exhibited once and then only for four months. Between 6 November 1987 and 6 March 1988 it was part of an exhibition entitled Age of Chivalry: Art in Plantagenet England 1200-1400 at the Royal Academy of Arts.

According to Jonathan Alexander in a publication prepared for that exhibition, 'It is unusual to find such an elaborate inscription on a ring. The use of French rather than English raises the possibility that this ring is a French import, but French was still widely used in England among the nobility.'

Another ring in the museum's collection is said by the museum to "recall the Hornsey ring". Its date of manufacture is the same as the Hornsey/Harringay ring, but the find location is apparently not known. The colour picture is included to give a better sense of what 'our' ring might look like in real life. So much treasure under our feet.  Sadly lockdowned by concrete :/

With Tottenham being such a rich area in the past.  There will be more finds to be had......if it was possible.

Is there not a story (apocryphal?) that the Princes in theTower were met at Harringay and escorted securely into London? Nice to imagine a connection.

Not that I've heard.

There is a piece of accepted history about a rebellion against an early medieval king where the rebel knights met up at 'Harringay'. But that was Harringay used in its ancient sense, i.e. Harringay alias Hornsey: Hornsey being the ancient manor. It's generally accepted that the event took place in Highagte. I'll dig up more about it when I get time later, but I'm displacing from an urgent deadline right now!

Yes, thats the only ref Ive heard about it too.
Rebels R Us :)

I thought that Finsbury Park was a wooded area and the princes were met at a point within the park and escorted into London. ?

Here's a bit more on this. It wasn't not a major event in history.

History going back this far can be quite vague. But most accounts seem broadly to agree on the outline of the event and that it took place at Hornsey (alias Harringay) Park.

Hornsey Great Park was the Bishop of London's deer park. It covered a very large area stretching from Highgate to Finchley. At its centre was was the Bishop's hunting lodge. Its location was shown on old maps (and some new ones) as Lodge Hill. The Lodge was located roughly where 12th green of Highgate golf course is today. Evidence of it is still visible.

It is where, in the 1386, the Duke of Gloucester, the Earls of Arundel, Warwick, and other noblemen, assembled "in a hostile manner" to seek the dismissal of Richard II's two favourite ministers -the Earl of Suffolk and Robert Duke of Ireland.

Later, the nobles were accused of treason and Warwick, Gloucester and Arundel were banished from the Kingdom. Gloucester was subsequently arrested and murdered by anonymous assassins whilst imprisoned in Calais.

Whilst checking my sources, I did come across an account from an 1848 parliamentary paper which seems to confuse Brownswood / Hornsey Wood now the location of Finsbury Park with Hornsey Great Park. It's almost inevitable that these details get mixed up. Perhaps it was this account, or a derivative of it, that you had picked up on, Melvyn.

Hi again, Hugh, after a long absence (almost 10 years and about 19,000 miles). All fascinating stuff. Sounds like Gloucester got Epsteined.
To change the subject back to the rings, though— Those photos appear to be of two quite different rings, and that doesn't seem to be mentioned in any comments or captions. I'm wondering if can you confirm that the inscription is definitely on whichever ring was discovered in 1898 in the rubble of the previous Queen's Head structure. Many thanks! 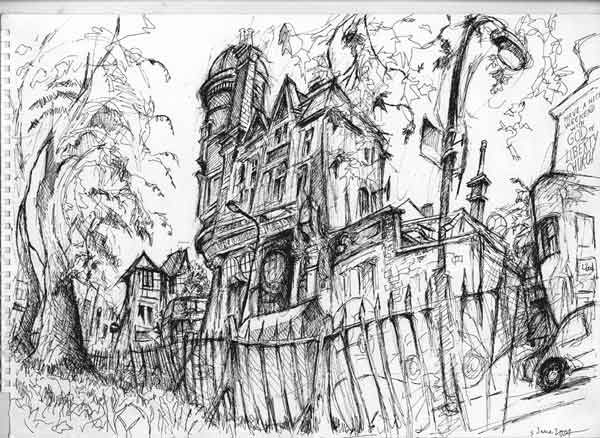 Thanks much! I was just coming down here to  apologize for not looking hard enough until now...  Cheers