A snapshot of history has revealed the first ever British Ladies' football match was played in Crouch End in Victorian times.

Amateur historian and football enthusiast John Adkins, 67, has uncovered a picture of the landmark game in a vintage copy of The Daily Telegraph Football Chronicle.

He bought the book, published in 1993, two weeks ago from the North London Hospice charity shop in Fortis Green Road, Muswell Hill, for just £1.50 and was fascinated by the black and white image of women in nightcaps and boots kicking a ball around in 1895.

Retired bus driver Mr Adkins, who lives in Princes Avenue, Muswell Hill, said: "I was surprised to see that they had a ladies team that far back, I wouldn’t have thought women's football would have been entertained in those days. In Victorian times, you can imagine their noses going up in the air at the mention of it."

The vintage press clipping shows the British Ladies' Football Club playing when Crouch End was little more than farmland and it is published under the headline No Game For Ladies!.

The report reveals the match was not entirely accepted by the establishment and reads: "The British Ladies Football Club was formed in 1895, and played their first match at Crouch End. Some 10,000 spectators turned out to watch this novelty, regarded by the football authorities as a 'farce'. The ladies turned out in nightcaps and heavy, cumbersome skirts, and wore shinguards."

Mr Adkins, a die-hard Barnet Football Club supporter, has spent many years researching the League Two club’s history and collecting vintage images of football teams, and he bought the football chronicle to add to his collection.

His knowledge of early pitches used by Barnet FC has led him to believe the ladies’ match took place at Shepherds Cot Farm, on the current site of Highgate Wood School in Montenotte Road, or near to Alexandra Palace in Nightingale Lane.

The picture also reveals some fascinating detail about the early game.

"I like the little things," said great-grandfather Mr Adkins. "Like you look at the goal and you can see that's just two bits of wood, there are no nets just a basic frame for a goal.

"The conditions they played in, it’s not like today, if it's muddy they say 'we're not playing in that', but back then they played in six inches of mud and things like that. And just look at these women, the dress and the kit, how can you run around in stuff like that?"

But he is sceptical about the reported 10,000 spectators and believes the crowd size may have been a misprint.

"There's never been any stadiums in Crouch End, but there were football pitches," said Mr Adkins. "You could get 2,000 or 3,000 around the edge of a pitch like that, but there’s no way 10,000 people, to me that’s a bit too much. But how would they know, there were no turnstiles in those days!"

I've just learned that in fact, Ladies football predates its appearance in Hornsey by at least 15 years. 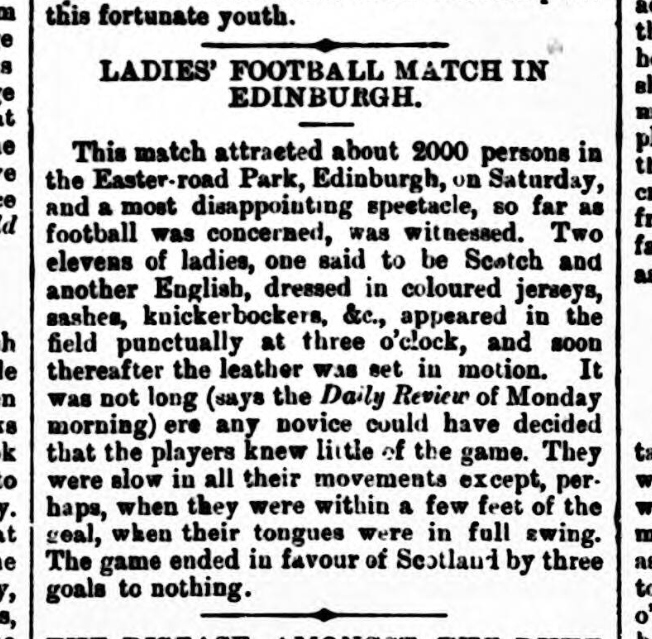