A Quick Butchers at Baldwins

It has occurred to me to wonder from time to time where the the name of our much loved local butcher came from. And how long since a Baldwin has been at the helm.

So, I did a quick whizz round the the records room at HoL Towers and worked out an outline history.

The butcher business that eventually became today's Baldwins started off life a few shops up the road, where it was still based when it was bought by the current owner Andreas. Now trading on the corner of Mattison Road at number 469, the shop spent much of its life at number 477 (now the ICut Barber Shop).

The business was opened in 1896 as Davy's Bros Butchers. By 1901 the business had changed hands and was being run as R. Green Butcher, by Richard Green, a Lincolnshire born master butcher. Richard had moved in above the shop along with his sons Richard (16) and Douglas (14). His wife had previously died, but also sharing the house with the Greens were Richard's sisters-in-law Tryphana Steer, who acted as the housekeeper, and Amy. His niece Rhoda Cutting took the role of cashier in the shop, his cousin William Stennet was a butcher and last but not least was their domestic servant, Sarah Taylor. 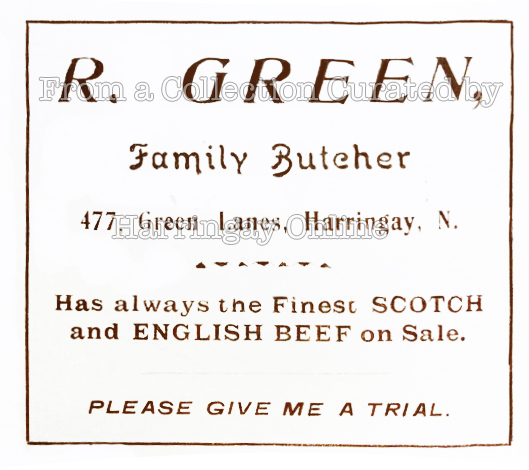 By 1910 the business had been sold and was trading as Gentry Bros Butchers, run by Charles Wright Gentry. At 57 years of age, Charles was perhaps nearing retirement. He lived above the shop with his wife Kate, two grown-up daughters, Kate and Marion, grown-up son, William and sixteen-year-old Edward.

Another change just three years later in 1913 saw the business become Jakes Bros Butchers. The shop kept this name until the early 1930s. The records give few details about the Jakes brothers. But, we do know that by the mid-1920s, William and Marianne Jakes were resident above the shop. I can find no mention of the other brother.

In 1935 the business is taken on by one Redvers John Baldwin. The 1911 census records ten-year old Redvers as plain old John. One has to wonder where the Redvers came from. Could it have been inspired by Baldwin de Redvers, Earl of Devon in the 13th century?

Redvers, or John, Baldwin was born on 3rd August 1900, in Enfield. By 1911 he was living with his family at 7 Ordnance Road, Enfield. His father George was a metal grinder at the Royal Small Arms Factory at the end of Ordnance Road. (The factory made rifles for the British Army,  including the famous Lee Enfield). HIs mother, Sarah, no doubt had little capacity to work since she had nine children to care for!

Records show them at the Green Lanes address until 1963. Their son Colin lived with them until 1957. After 1963, Redvers and Doris retired to Southend. Redvers lived until 1984.

As far as the shop is concerned, the trail goes rather cold for about twenty years. Then in 1982, the shop starts trading as Baldwins Butchers.

Current owner Andreas Charalambous acquired the business in 1985 after a career as a chef. Andreas told me that the business was still based at 477 when he bought it. He recalls being told that the former owners had brought cattle in and kept them in sheds behind the shop.

Baldwins stayed at number 477 till about 2000. Then when more room was needed, Andreas moved the business to its current premises at number 469.

Another wonderful slice of Harringay history! Thanks, Hugh.

Baldwins is a fabulous butcher's. After they moved from 477 to 469, however, it took me a while to start shopping there again, as I had to get it out of my head that 469 had previously been an undertaker's, as many of you will remember.

Yes, an unfortunate change of use.

They could have enterprisingly combined the two uses, like a certain Sweeney Todd

Very interesting history, never knew Baldwins has been there that long. Brilliant butchers, and now Billy is back even better!

When the shop shut and the window display was cleaned they used to put a lamb,chicken and bull ornaments in the window for overnight.